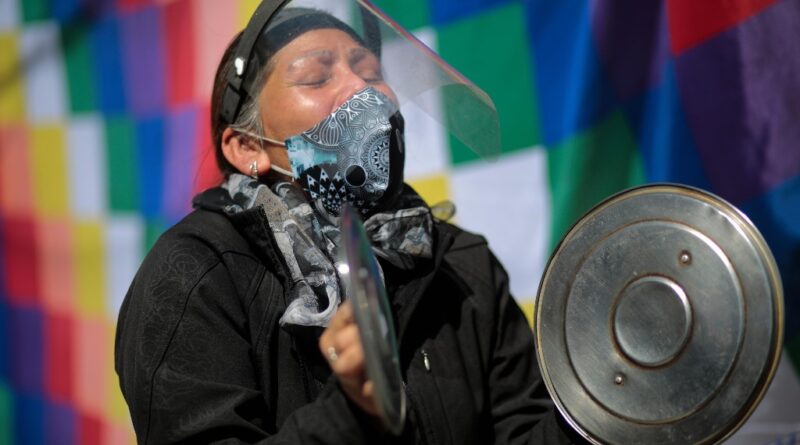 This phrase, attributed to the Mexican intellectual Nemesio García Naranjo, seems to be an appropriate phrase today to describe the social and political positions of Jeanine Añez, the self-proclaimed interim president of Bolivia after the coup supported by the United States and the Bolivarian oligarchy, and the resignation of Evo Morales in November 2019.

Her first big announcement as she made her triumphal entrance to the Palacio Quemado, Bolivia’s seat of government, was, “Thanks to God, who has permitted that the Bible again may enter the Palacio. May God bless us and enlighten us.” This foretold the installation of a fundamentalist dictatorship in Bolsonaro’s style, openly neoliberal, with a political strategy protected by a series of repressive and punitive processes that included a triple alliance: the police forces, the military, and the Catholic Church, with the latter underlining the need to impose its values.

Clearly, in tune with the onslaught of the coup, the United States legalized and legitimatized the self-proclamation of Añez; the U.S. president, Donald Trump, declared his support for the president and, with the shameless disdain that characterizes U.S. interference, assigned her the honorable mission of “assuring a peaceful democratic transition by means of free elections.” As a gesture of gratitude, the “government of peaceful transition” began a campaign to re-establish diplomatic relations and reinforce the ties with the U.S. government, claiming the existence of common interests between the two countries and re-situating Bolivia squarely in Washington’s sphere of influence.

RELATED CONTENT: “Bolivia’s Coup President Will End up Fleeing the Palace in a Helicopter”

In this way, the misgovernment of Añez – so close to the United States – has taken upon itself to negotiate the return of the Drug Enforcement Administration (DEA), as well as the U.S. Agency for International Development (USAID). Establishing distance from those governments not in line with U.S. politics, they requested admission of Bolivia to the Lima Group, whose goal, according to the Group’s perspective is “to seek a peaceful and democratic outcome in Venezuela.”

The de facto misgovernment of Jeanine Añez, lacking a political project other than the neoliberal pattern, began applying the concepts of the conservative right-wing to Bolivian economic policy, imposing those policies that dismantle social policies advancing the improvement of life for the inhabitants, privatizing strategic businesses and smashing culture. In the same way, under the direction of Jorge Tuto Quiroga, Oscar Ortiz and Murillo has designated the large agricultural-cattle companies as part of the rotating and separatist cabinet, deepening the contradictions and greatly increasing marginalization, inequality, exclusion, and violence.

In none of these almost eight-month has Añez had even the slightest remote intention of “achieving reconciliation “ of the Bolivian people. Her central preoccupation has been to define the view of the de facto government, whose dynamic of domination includes the naturalization of the historically established colonial and patriarchal hierarchy, which classifies the Bolivian people and culture into superior and inferior. This ignores the fact that before God all human beings are equal, but for Añez, as Boaventura de Sousa Santos said, “equality between inferiors cannot be similar to equality among superiors.”

In this misgovernment which has prolonged its transitional character, the concrete facts are shown to be part of an oligarchic culture, in which racial and ethnic classification and disrespect for indigenous and campesino movements, for farmworkers’ and workers’ movements are accompanied by continual attacks on women. They criminalize these faces and try to make them once again invisible, because for conservative racist forces, these faces are those of subjects without agency, with reduced capacity for thought, who can only reproduce the logic of thought imposed upon them.

RELATED CONTENT: Perspective on the Recent Protests in Bolivia

Añez hopes to ignore the fact that these peoples have generated important popular anti-system uprisings, that, though occasionally with painful apprenticeships, they have even developed concrete proposals for confronting the logic of an environmentally-destructive capitalism and for developing the Earth as a Shared Dwelling. Añez tries to minimize the anger and impatience for change of the collective will of the Bolivian people, which has been greater than the fear imposed by her massacres that took place in the city of El Alto and in the area of Sacaba, by the signing of Decree 4078 (granting impunity to the armed forces), by the persistent racist aggressions and repressions, by the imposition of a state of siege, by the political and media persecution of those who think differently.

The incompetence of this regime lacking concrete actions is demonstrated not only in the social and economic spheres but also in the ineptitude of the response to the chaotic situation that the pandemic has produced in Bolivia. On this theme, the Commission for Latin America and the Caribbean (CEPAL) has indicted that extreme poverty in Bolivia will increase to 3.9% in 2020 compared with 2.5% in 2019. Additionally, this body states that that approximately 453,000 Bolivians are in conditions of extreme poverty due to State abandonment of social aid to combat the economic impacts of COVID-19.”

This is not about a naive political vision. The health emergency has only reinforced the determination to prolong her mandate and postpone the presidential elections that she, as an interim government, is required to hold. The self-destruction and collapse of her disastrous regime is not due to the Movimiento al Socialismo Party (MAS) or to the women, or to the miners, or the indigenous peoples. It is due to the dismal reign of terror that she imposed to continue in power, the cruelty toward human dignity and the well-being of all Bolivians.

However, we should not discredit the people who are the inheritors of the resistance, the peoples’ movements that articulate their feelings and indignation, who construct collective expectations according to their cosmo-visions, often with diverse meanings, but always reading the contexts and identifying those who betray and violate their lives and integrity. When one is that far from God, it becomes difficult to understand the methods of doing and undoing of the multitude who are trying to become free, where all, with mutual respect, are always continuing the push toward emancipation.