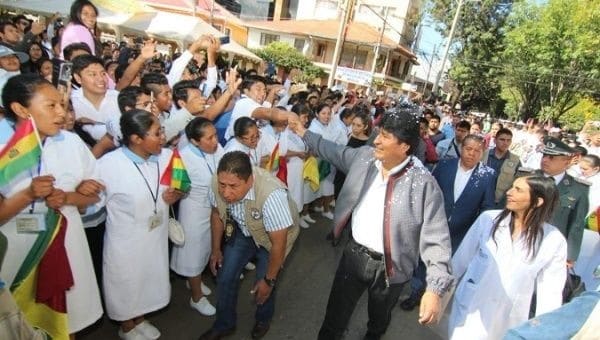 At least 70 percent of the Bolivian population will be covered by the new system.

The SUS inauguration ceremony was held in the Cochabamba department, where Morales visited a medical center and delivered new equipment. In his speech, he said that universal free health insurance is possible due to the Bolivian economic model, in which state-owned companies provide financial resources for health services.

“Tell us where we have problems,” President Morales said, calling for social participation to improve the SUS so as to assure a permanent success.

Morales also visited the Sarcobamba Hospital to talk with specialists, verify the SUS start-up and communicate through Telesalud, which is Latin America’s health platform based on biggest telecommunication and designed to improve access to specialized medical services in distant rural communities.

“The results are extraordinary in public health and collective health. They can be seen in the reduction of infant mortality, child malnutrition, number of professionally-attended births, diseases under control and population’s healthy life years,” Leanes affirmed and commented that Bolivia has tripled its health budget since 2006, as Opinion reported.

The government of Bolivia will allocate some US$200 million in 2019 to guarantee the sustainability of the SUS by improving its equipment, supplies and infrastructure.

Bolivian Health Minister Gabriela Montaño announced that a cellphone app will serve to guide the population about the SUS health care centers and diseases covered. Authorities have estimated that the new health system will benefit some 5 million Bolivians between 5 and 59 who previously lacked free coverage.

In the 2014 presidential elections, then-candidate Morales promised to create gradually universal health insurance, which is expected to cover at least 70 percent of the Bolivian population.

According to WHO-PAHO data, Bolivia occupies the first place in “shared prosperity” and is the Latin American country that most reduced extreme poverty.

“We know that not everything is perfect in the health area,” Leanes said but stressed that “there is no denying that Bolivia has free care in more than 3,100 first, second and third level health facilities,” as Patria Nueva reported.