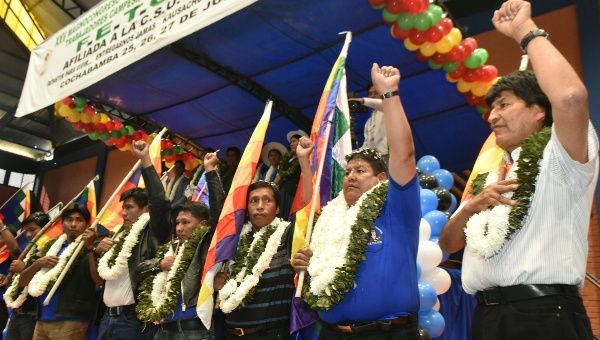 “How can we talk about the success of privatization when even its authors acknowledge that this process was a failure,” the ruling party senator said.

A senator from Evo Morales’ ruling party has denounced the country’s right-wing opposition for defending their role in the mass privatization of Bolivian assets during the neoliberal period, pointed out that the free market policies brought deep poverty to the Andean country.

“How can we talk about the success of privatization when even its authors acknowledge that this process was a failure,” said Rubén Medinaceli, a Senator for the ruling Movement Towards Socialism (MAS), which has rejected neoliberal policies in exchange for socialist policies prioritizing wealth redistribution and social programs turning the country into the fastest growing economy in the region.

Medinaceli also pointed out the huge economic damage the neoliberal period brought on the country, where inflation ran at 8,000 percent at the beginning of privatization, and where poverty levels consistently stood at over 60 percent.

The Senator cited a recent parliamentary report that calculated that the damage to the economy brought by wholesale privatizations stands at US$21 billion dollars, as many state companies were asset stripped and collapsed following their sale, leading to huge job losses.

Last week, in an interview with the Red Gigavisión outlet, Cardenas said the process of mass privatizations which he presided over in the 1990s “had been positive”. When asked about the collapse of the national airline L.A.B following its sale which he had personally signed off on, Cardenas replied that that was due merely to “bad luck”.

Since leftist President Evo Morales took power in 2005, the country has reversed much of the privatizations, taking back control of the country’s natural resources and strategic industries.

Since then, Bolivia has become the region’s fastest growing economy, with one of the lowest rates of inflation, just 1.5 percent in 2018, and allowed the country to cut poverty levels in half. The nationalization of key industries such as gas production, mining and lithium extraction, has provided the state with extra revenue that it has been able to invest in infrastructure, social programs and industrialization.

Bolivia is heading to presidential elections in October as President Morales seeks a third full term in office since the new state and constitution were established in 2008. the country’s first Indigenous president is leading opinion polls and is expected to win the elections with a comfortable lead.