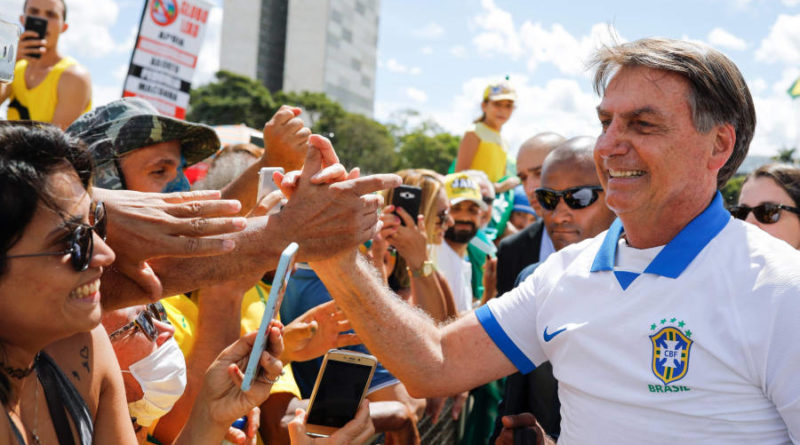 By the attitude and statements made in recent days, Jair Bolsonaro shows that he has not taken note of the serious way the coronavirus is advancing in Brazil, where this Tuesday the first fatal victim was registered; a 62-year-old man in São Paulo as a result of complications from the disease. According to the Ministry of Health in the last four days, those infected with the virus rose from 121 to 290. The government has been notoriously behind in coalating the statistics coming in from various states. As it stands now people with symptoms that don’t yet have a firm diagnosis jumped from 1,913 to 8,819 between Saturday and Tuesday.

A domestic worker, whose employer recently returned from Europe, died in the interior of Rio de Janeiro with symptoms of the virus but the reason for her death has not yet been confirmed.

The entire political spectrum, from the opposition Workers’ Party to right-wing leaders of the Brazilian Social Democracy Party, are expressing their alarm while the President today reiterated his disinterest in the data on the disease and attributed the jump to ill-intentioned groups who plan to sow collective “hysteria” to affect his country’s economy. Bolosonaro’s thinking is in line with his political and spiritual partner, Bishop Edir Macedo, owner of the TV Record and the Universal Church of the Kingdom of God, who characterizes the coronavirus as harmless and the alarm is the fruit of Satan.

RELATED CONTENT: What is Being Done in Latin America in the Face of the Coronavirus Pandemic?

Without taking note of the first death from the virus, which was followed by four other patients who were admitted to the same hospital in Sao Paulo, the head of state announced that he will organize a “little party” to commemorate his 65th birthday on March 21.

He announced this in defiance of his doctors who recommended that he remain isolated until it is known whether or not he had contracted Covid-19. The first test was negative but not conclusive. The test was carried out on Thursday shortly after returning from the United States where he was received by Donald Trump. Fourteen members of the presidential entourage are infected, including his ambassador in Washington, Nestor Froster, and the Secretary of Communications of the Planalto Palace, Fabio Wajngarten.

Trump told employees he was “concerned” about the physical contact he had with Wajngarten, with whom he took a photo with at his Palm Beach Florida resort, and from whom he received a cap with the slogan “Make Brazil Great Again,” a phrase from the 2016 Republican election campaign that Bolsonaro supporters recycled for their own advertising using Brazil with a “z”, U.S. style.

Wajngarten was close to Trump for about 10 minutes and stayed closer to the Brazilian leader for much longer during the four-day American visit. Another who hugged Bolsonaro was Miami Mayor Francis Suarez, who tested positive on Friday. There’s even more; the twenty-one Miami-Dade Police motorcycle unit who escorted him for part of those four days are now in quarantine.

While Bolsonaro emulates Donald Trump most of the time he has not been following him closely when it comes to the pandemic. While Trump has put in place some closures of air travel and other emergency measures Bolsonaro remains firmly in denial.

He declared that he does not plan to close the borders or impose restrictions on flights arriving from abroad and criticized, without naming him, the governor of Rio de Janeiro, Wilson Witzel, for having decreed the closure of schools and recommended that the population avoids public spaces and crowded beaches.

On Monday, he was absent from the video conference in which Alberto Fernandez and other South American leaders participated and exchanged information about the disease.

He has avoided being at the ministerial meetings on Covid-19 and only on Monday created a crisis cabinet at the head of which he appointed General Walter Souza Braga Netto, whose past experience includes the bloody repression of the favelas of Rio de Janeiro during the military intervention of 2018, but has no experience at public health at all.

On Sunday, Bolsonaro participated in an ultra-right-wing event calling for an attack on Congress and the Judiciary, and to incite disruption of the institutions. The march took place despite the fact that the government of Brasilia recommended against it in order to reduce the sources of infection.

At that rally, he again defied the doctors by breaking his quarantine and making contact 272 times with his followers (he patted them on their back, shook hands, took selfies and wore caps), this according to the count made by the newspaper O Estado de São Paulo.

That same conservative newspaper that supported the rise of Bolsonarism wrote in its Tuesday editorial, “The world is at war with the coronavirus, while Bolsonaro concentrates on his particular enemies.”