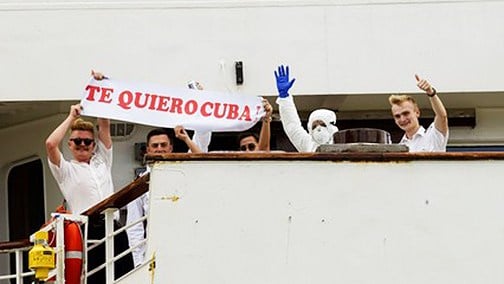 The cruise ship MS Braemar, with five confirmed cases of Covid-19 and a thousand people on board, docked shortly before dawn this Wednesday in the Port of Mariel, 40 kilometers from Havana. The airport evacuation corridor to the runway of the José Martí International Terminal, from where four United Kingdom planes moved the evacuees, left with the clockwork precision.

While the world holds its breath and it is impossible to predict the consequences of the pandemic, Cuba was in the news yesterday because of the transfer of more than a thousand passengers and crew members of the Braemar who, since March 8, were confined to being on a ghost ship in the Caribbean.

The odyssey began when the British company Fed Olsen’s cruise ship arrived in Cartagena, where a woman from the U.S. disembarked and was diagnosed shortly afterward with coronavirus. From that moment on, five Caribbean ports denied entry to the ship and the families of the cruise passengers turned to the media to express their fears for the fate of their loved ones and the possibility that they would be forced to make the long journey back to Europe, exposed to massive contagion and perhaps death on an industrial scale before the ship could reach Britain.

The scaremongering and media hype surrounding the new coronavirus turned the passengers and crew into a kind of plague. Anthea Guthrie, a passenger on the Braemar and a retired gardener, showed a video on her Facebook page of the time when the cruise ship was being supplied 25 miles from one of the ports where they were unable to dock. A ship towed a second rudimentary barge, without engine or crew, to bring sacks of rice and bunches of bananas to the Braemar, where members of the British crew came aboard in the middle of the night, like fugitives in a kind of pirate expedition.

The testimony of that moment was shared by Anthea after she heard the good news that Cuba would receive them. She published another video in which the passengers, relaxed on deck, thanked the island’s gesture of solidarity and raised glasses to the health of the Cubans. Like a veteran of the networks, she has not only been reporting from the ship but included the label #DunkirkSpirit, which alludes to the evacuation of 330,000 allied soldiers – mostly British – from the French coast in May 1940, at the beginning of World War II, when Adolf Hitler seemed invincible.

“For us, Dunkirk does not only speak of heroism, but of humanity. It means that there are solutions in the worst of circumstances, and this time we will have Cuba to thank for it”, said Anthea, relieved after the news that the cruise ship would dock on the island.

Havana’s decision to allow entry to MS Braemar, following a request from the governments of the United Kingdom and Northern Ireland, did not surprise the Cubans, who have a long tradition of medical and humanitarian collaboration. Since the beginning of the sixties, thousands of health workers have collaborated with almost all the poor countries in the world. Over 35,000 medical students from 138 countries have studied for free on the island. Following the devastating earthquakes in Pakistan (2005) and Haiti (2010) or during the Ebola fever in Western Africa, in 2014, Cuban doctors were the first to arrive in the territories marked by devastation.

Cuban collaboration in health with its unquestionable scientific results, particularly in the field of biotechnology, has provoked poisonous anger in the usual privileged people and sympathy and warmth in the usual unprivileged. But the truth of Cuba, a life saver for many during the Covid-19 pandemic, has tipped the balance toward expressions of affection directed at the army of white coats. The Latin American governments that, under pressure from Washington, expelled the doctors, today live the double ordeal of the coronavirus and the rebuke of their people for such an act of arrogance and stupidity. A line of nations are calling for medical collaboration and the island’s drugs, which have proven their effectiveness in treating the sick.

The great paradox is that, while the ships with oil and food contracted by Cuba are harassed by the United States, the ships with the sick that nobody wants in their ports receive solidarity and respect in Cuba. The Trump regime, by the way, refused to receive the Braemar, according to an article published yesterday in The UK Independent.

The two most repeated words since yesterday on Twitter are “Cuba Saves”. This is no coincidence.