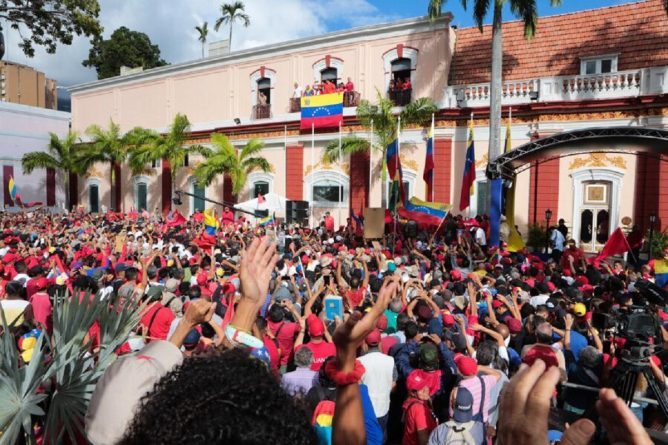 by Thierry Meyssan
The crisis which is destabilizing Venezuela, like those which are beginning in Nicaragua and Haïti, needs to be analysed in order to enable us to address it. Thierry Meyssan reminds us of three interpretative hypotheses and argues in favor of one of them. He evokes the US strategy and the ways in which it may be countered.

Today, Venezuela is divided between two legitimacies – that of Constitutional President Nicolas Maduro and that of the President of the National Assembly, Juan Guaidó.

Guaido nominated himself as interim President, allegedly by virtue of articles 223 and 233 of the Constitution. We only need to read these articles to see that they in no way apply to his case, and that he can not claim from them any legitimacy for the post he seeks to usurp. Despite that, he has been accredited by the United States, the Lima Group and part of the European Union.

Some of Nicolas Maduro’s supporters claim that Washington is reproducing the overthrow of a leftist government, just as it did against Salvadore Allende in 1973, during the mandate of President Richard Nixon.

Others, reacting to the revelations of Max Blumenthal and Dan Cohen about the career path of Juan Guaidó [1], believe on the contrary that this is a colour revolution similar to those we saw under the presidency of George W. Bush.

Facing an aggression by an enemy who is far stronger than oneself, it is crucial to identify its objectives and understand its methods. Only those who are capable of anticipating the attacks they are about to suffer will have any chance of surviving.

Three dominant hypotheses
It is perfectly logical for Latin-Americans to compare what they are presently experiencing to what they have already known, like the Chilean coup d’etat of 1973. But it would be risky for Washington to reproduce the same scenario 46 years later – it would be an error, because today, everyone is familiar with the details of this deception.

Furthermore, the revelation concerning Juan Guaidó’s connections to the National Endowment for Democracy and Gene Sharp’s team reminds us even more of a colour revolution, since Venezuela has already experienced such an event, which failed in 2007. Specifically, it would be dangerous for Washington, 12 years later, to attempt to reprise a plan which has already backfired.

In order to understand Washington’s intentions, we must first familiarize ourselves with its battle plan.

On 29 October 2001, just one and a half months after the attacks on New York and the Pentagon, US Secretary for Defense Donald Rumsfeld created the Office of Force Transformation, whose mission was to revolutionize the US armed forces, to change their mentality in order to respond to the radically new objective of confirming US supremacy world-wide. He handed this job to Admiral Arthur Cebrowski, who had already accomplished the networking of US military units, and had participated, in the 1990’s, with the elaboration of a doctrine of digital warfare (Network-centric warfare) [2].

Cebrowski arrived with a pre-planned strategy which he presented not only to the Pentagon, but to military academies all over the place. Although it was very important, his work within the armed forces was not covered by the media until the publication of an article in Vanity Fair. Thereafter, his explanations were published by his assistant Thomas Barnett [3]. It goes without saying that these documents were not necessarily faithful to the Pentagon’s ideas, which they make no attempt to explain, but to justify. Nonetheless, the main idea is that the United States seize control of the natural resources of half of the world, not to use them for themselves, but to decide who would be allowed to use them. In order to do so, they would have to deprive these areas of any political power other than their own, and therefore destroy all the state structures present in the region.

Officially, this strategy has never been implemented. Nonetheless, what we have been witnessing for the last twenty years corresponds exactly to Barnett’s book. First of all, in the 1980’s and 1990’s, there was the destruction of the region of the « African Great Lakes ». We mostly remember the Rwandan genocide and its 900,000 dead, but the entire region was devastated by a long series of wars which caused the death of six million people. What is truly astonishing is that twenty years later, many states have not recovered sovereignty over all their territory. This episode pre-dates the Rumsfeld-Cebrowski doctrine. We do not know if the Pentagon had planned what happened, or if it was while they were destroying these states that they conceived of their plan. Later on, in the years between 2000 and 2010, we witnessed the destruction of the « Greater Middle East », this time according to the Rumsfeld-Cebrowski doctrine. Of course, we may choose to believe that all this was just a succession of « democratic » interventions, civil wars and revolutions. But apart from the fact that the populations concerned contest the dominant narrative of these events, we note that in these cases also, the state structures were destroyed and peace did not return with the end of military operations. As of now, the Pentagon is evacuating the « Greater Middle East » and is preparing its deployment in the « Caribbean Basin ».

Many elements indicate that our previous understanding of the wars of George W. Bush and Barack Obama was mistaken, while they corresponded perfectly to the Rumsfeld-Cebrowski doctrine. This reading of the events is therefore not the fruit of a coincidence with Barnett’s thesis, and forces us to rethink what we witnessed.

If we adopt this method of thought, we have to consider that the process of destruction of the Caribbean Basin began with the decree by President Barack Obama, on 9 March 2015, according to which Venezuela is a threat to the national security of the United States of America [4]. This may seem rather old, but in reality it is not. For example, President George W. Bush signed the Syrian Accountability Act in 2003, but military operations in Syria only began eight years later, in 2011. This interval was necessary for Washington to create the conditions for the troubles.

The attacks against the left before 2015
If this analysis is accurate, we have to consider that the events prior to 2015 (the coup d’etat against President Hugo Chávez in 2002, the attempt at a colour revolution in 2007, Operation Jericho in February 2015, and the first demonstrations by the guarimbas) corresponded to a different logic, while those that occurred afterwards (guarimbas terrorism in 2017) are part of the plan.

My logic is based also on my understanding of these elements.

Thus, in 2002, I published an analysis of the coup d’etat which revealed the role of the United States behind the Fedecamaras (Venezuelan company management) [5]. President Hugo Chávez wanted to check my information, and sent two emissaries to Paris. One of them has since become a General, and the other is currently one of the most senior personalities in the country. My work was used by prosecutor Danilo Anderson for his investigation. He was assassinated by the CIA in 2004.

In 2007, a number of Trotskyite students began a movement to protest the non-renewal of the licence of the Caracas radio-television company RCTV. We know today, thanks to Blumenthal and Cohen, that Juan Guaidó was already implicated, and that he had received training by disciples of the non-violence theorist, Gene Sharp. Rather than repressing the excesses of the movement, President Hugo Chávez, on the occasion of the ceremony of the signature of the ALBA agreement (Bolivarian Alliance for the Peoples of Our America) on 3 June, read for twenty minutes from an old article that I had written about Gene Sharp and his conception of non-violence in the service of NATO and the CIA [6]. Realizing the manipulation to which they had been submitted, a large number of demonstrators withdrew from the combat. Clumsily denying the facts, Sharp wrote to the President and then to myself. This initiative created confusion among the US left wing, for whom Sharp was a respectable personality with no links to the US government. Professor Stephen Zunes took his defense, but when faced with proof, Sharp closed his institute, leaving his place to Otpor (Resistance) and Canvas (Centre for Applied Non-Violent Action and Strategies). [7].

Let’s return to the present period. Of course, the recent attempt to assassinate President Nicolas Maduro reminds us of the way in which President Salvador Allende was pushed to suicide. Of course, the demonstrations convened by the President of the National Assembly, Juan Guaidó, reminds us of a colour revolution. But this is not at all contradictory to my analysis. Let’s note that an attempt to assassinate Mouamar Kadhafi closely preceded military operations against Libya. And when the disciples of Gene Sharp supervised the first demonstrations against President Hosni Moubarak in Egypt, they even distributed an Arab version of their booklet, which had already been used in other countries [8]. But as further events were to show, it was neither a coup d’etat or a colour revolution.

Preparing for war
If my analysis is correct – and for the moment, everything seems to confirm it – we have to prepare for a war not only in Venezuela, but throughout the Caribbean Basin. Nicaragua and Haïti are already destabilized.

This war will be imposed from the exterior. Its aim will no longer be to overthrow leftist governments for the profit of right wing parties, even if appearances will at first be confusing. The logic of events will make no distinction between one side or another. Little by little, the whole society will be threatened, without the distinction of ideology or social class. Identically, it will become impossible for other states in the region to shelter from the storm. Even those who believe that they can protect themselves by serving as a rear base for military operations will be partially destroyed. For example, even though the Press hardly ever mentioned it, entire cities were wiped out in the region of Qatif, in Saudi Arabia, even though this country was Washington’s main ally in the « Greater Middle East ».

Based on the conflicts of the African Great Lakes and the Greater Middle East, this war should unfold by stages.

It is, however, possible to defend oneself, since Syria managed to do so. Several initiatives will have to be taken urgently :

All this must be done as quickly as possible. These measures take a long time to implement, and the enemy is almost ready.