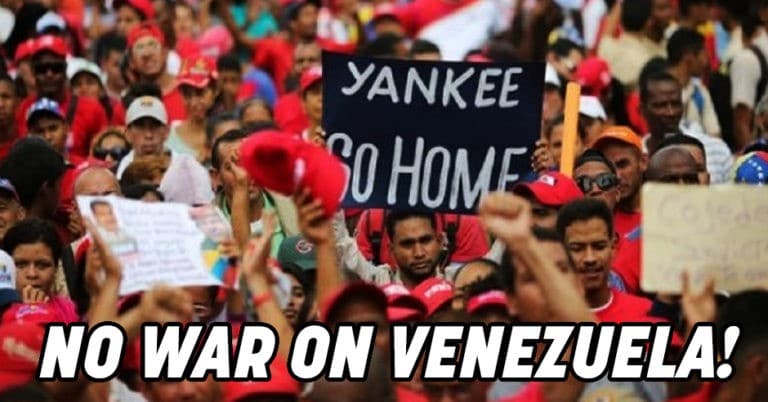 The Canadian and US governments’ recognition of opposition figure Juan Guaido as the self-declared President of Venezuela, along with Canadian and US sanctions and escalating material support for opposition forces, are shocking violations of international law, national sovereignty, and both the United Nations’ and OAS’ charters. The situation remains critical and risks further escalation as Trump continues to threaten military intervention.

Juan Guaido, who less than 1/5th of Venezuelans had even heard of before January 23rd of this year and who has participated in and supported violent guarimba actions in recent years which led to the deaths of hundreds, has no legitimacy whatsoever. Juan Guaido’s self-declaration as President was driven by Washington and Ottawa directly as part of the latest plot at “regime change” in Venezuela. Both US Vice President Mike Pence and Foreign Affairs Minister Freeland met with Guaido to plan their international support.

The Liberal government’s full complicity in carrying out these crimes is shameful. Chrystia Freeland’s leadership of the “Lima Group” attempts to put a “humanitarian” spin on what the United States is declaring openly as an attempt at US control over Venezuela’s oil.

The Communist Party of Canada demands that Canada immediately withdraw from the Lima Group. The Lima Group, a meeting of countries outside of recognized international organizations of states, claim to care about democracy and peace in Venezuela. In fact, many of these countries are the worst abusers of human rights in the region, including the ultra-right Duque government in Colombia responsible for the ongoing murders of labour and social movement leaders, the ultra-right Bolsanaro government which came to power as part of a coup in Brazil, and Honduras which held a blatantly stolen election in 2017. This group of rightwing countries is now openly calling for a military coup in Venezuela.

The Communist Party of Canada demands that the Canadian government immediately lift the sanctions targeting Venezuela and Venezuelans which are attempting to create an economic blockade of the country by sewing fear of international investment in Venezuela’s economy. These criminal sanctions, along with those of the United States’, are reminiscent of the Nixon-Kissinger attempts to make Chile’s “economy scream” in order to pave the way for the fascist coup of 1973. While “socialism” is blamed for Venezuela’s economic problems, the country is faced with an economic war in the form of internal sabotage by oligarch controlled monopolies, sanctions from the US and Canada, and now the theft of Venezuela’s assets abroad by the minority of countries supporting the coup.

The Communist Party of Canada demands an immediate end to the corporate media’s outrageous lies and falsifications directed at Venezuela. They ignore the fact that Maduro was democratically elected in free and fair elections, observed by international observers including Canadians. We appeal to people across Canada to remember past slanders that proved false against countries and leaders that ended in US invasions, support for proxy armies and regional and civil wars. The majority of what is being said in the Canadian corporate media now about Venezuela is demonstrably false.

The latest attacks on Venezuela are part of the United States’ efforts at rolling back democratic forces and overthrowing government’s that are charting a sovereign path for Central and South America and the Caribbean.

Since the rise of Chavismo to power in 1998, Venezuela has been a main pillar of the bulwark against US imperialism. US National Security Advisor John Bolton, himself responsible for war crimes in the role he played in the illegal invasion of Iraq in 2003, has recently labeled Cuba, Nicaragua and Venezuela the “troika of tyranny”. The people of Nicaragua have been struggling against sanctions and US-led regime change plots in the last two years. Cuba has been a notorious target of US aggression since its revolution 60 years ago when it became the first free territory in the Americas. The ongoing criminal blockade of Cuba, now combined with some in Canada’s government joining in on bizarre accusations of “sonic attacks” on diplomats, point to a dangerous escalation in the US’ continued efforts to turn back the Cuban revolution.

The Communist Party of Canada extends full support and solidarity to the peoples of Cuba, Nicaragua and Venezuela and their governments which are continuing to lead the broader regional struggle for sovereignty, independence and the right to national self-determination.

Many others across Canada are demanding the federal government end its role in organizing this coup d’état in Venezuela. We appeal to labour and democratic movements to speak up and redouble solidarity efforts in order to win an independent foreign policy of peace and disarmament for Canada.

No coups! No sanctions! No invasion! Hands Off Venezuela!

Saturday Feb 23rd is an international day of action for peace and solidarity under the banner of “No war on Venezuela”. For event information across Canada and the world visit: https://www.nowaronvenezuela.org/23feb/