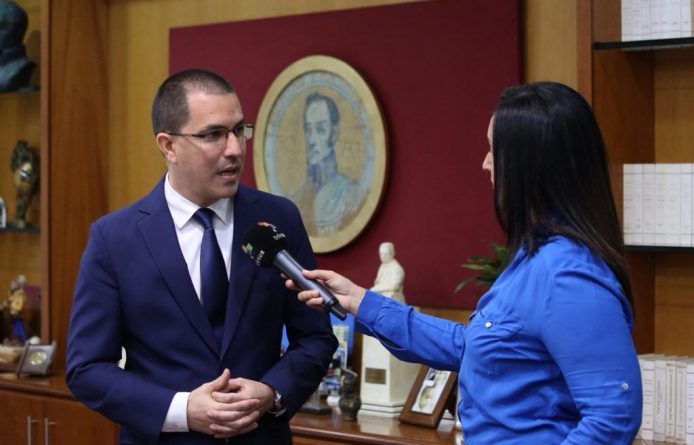 Elliot Abrams was questioned by US lawmakers in a hearing held last Wednesday, February the 13, by the Committee of Foreign Affairs in the House of Representatives of the US Congress.

The hearing was very controversial, from Pink Code activists protesting  with the slogan “Hands off Venezuela” and “No Coup in Venezuela” through an intense questioning by Rep. Ilhan Omar about Abrams’s background of lying to Congress and organizing black operations to destabilize governments in Central America and the Middle East.

In the C-SPAN video of the hearing and its transcript there is a point in the mark 1:19:52 when Elliott Abrams is asked by Rep. Ann Wagner about the negotiation of an Office of Interests between the two countries. The answer from Trump’s official is evasive at the beginning but he clearly states that there is no negotiation of an Office of Interest at mark 1:20:43 and he clearly answers “NO” to that question.

You can watch the whole hearing below:

On Friday 15, Jorge Arreaza, Minister of Foreign Affairs in an interview for Telesur reiterated that he participated in two meetings with US Diplomats and one of them was with Elliot Abrams in New York. The previous day, President Maduro in an interview with AP spoke about it and also about an invitation extended to Abrams for a meeting with Maduro of any format and anywhere.

In the Telesur interview Arreaza showed the diplomatic note issued by the US Embassy in Caracas requesting the initiation of a process to establish an Interest Office and also showed his most recent US visa clearly indicating that he was going to hold meetings with the Department of State.

“As you can see there is a clear path of lying to the Congress by this US Official, Elliott Abrams, and it is incredible how the US public opinion does nothing to expose this kind of criminal behavior”, said to OT, a diplomatic expert.

Below you can find the information posted in the Twitter account for Minister Arreaza with all the details.

The brand new visa issued to the Minister of Foreign Affairs indicating that he was going for a meeting in the Department of State:

The Diplomatic note from the former US Embassy in Caracas, dated January 26, requesting the opening of an Interests Section: