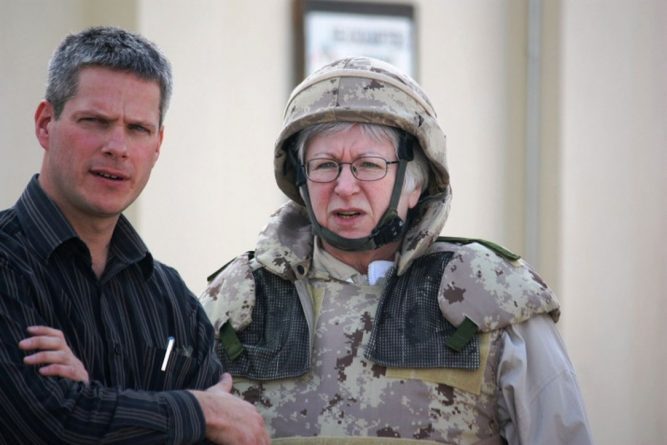 Why does the dominant media pay so much attention to Russian “meddling” in other countries, but little to Canada’s longstanding interference in the political affairs of nations thousands of kilometers from our borders?

The case of Ben Rowswell illustrates the double standard well.

The current Canadian International Council President has been the leading non-governmental advocate of Ottawa’s quest to overthrow Venezuela’s government. In dozens of interviews, op-eds, tweets and ongoing speaking tour the former ambassador has put a liberal gloss on four months of naked imperialism. But, Rowswell has been involved in efforts to oust Nicolas Maduro since 2014 despite repeatedly claiming the president’s violation of the constitution two years ago provoked Ottawa’s recent campaign.

A March 2014 Venezuela Analysis story suggested the early adopter of digital communications was dispatched to Caracas in the hopes of boosting opposition to a government weakened by an economic downturn, the death of its leader and violent protests. Titled “New Ambassador Modernizes Canada’s Hidden Agenda in Venezuela”, the story pointed out that Rowswell immediately set up a new embassy Twitter account, soon followed by another titled SeHablaDDHH (Let’s Talk Human Rights), to rally “the angry middle classes on Twitter.” The article noted that “Rowswell is the best man to encourage such a ‘democratic’ counterrevolution, given his pedigree” in digital and hotspot diplomacy. According to a March 2014 Embassy story titled “Canada dispatches digital diplomacy devotee to Caracas”, just before the Venezuela assignment “Ottawa’s top digital diplomat … helped to establish a communications platform for Iranians and Iranian emigrants to communicate with each other, and occasionally the Canadian government, beyond the reach of that country’s censors.” Previously, Rowswell was chargé d’affaires in Iraq after the 2003 US invasion and headed the NATO Provincial Reconstruction Team in Kandahar during the war there. An international strategy advisor in the Privy Council Office during Stephen Harper and Jean Chrétien’s tenure, Rowswell created Global Affairs Canada’ Democracy Unit. Rowswell also worked with the Washington based Center for Strategic and International Studies, whose board of trustees includes Henry Kissinger and Zbigniew Brzezinski, and the National Democratic Institute, which is part of the US National Endowment for Democracy that performs work the CIA previously did covertly.

In early 2015 then president of the National Assembly (not to be confused with Venezuela’s president) Diosdado Cabello accused the Canadian embassy of complicity in a failed coup. According to Cabello, an RCMP official attached to the embassy, Nancy Birbeck, visited an airport in Valencia with a member of the UK diplomatic corps to investigate its capabilities as part of the plot.

The president of the National Assembly also criticized Rowswell for presenting a human rights award to anti-government groups. Cabello said the ambassador “offered these distinctions to people of proven conspiratorial activity and who violate the fundamental rights to life of all Venezuelans.” At the embassy during the award ceremony were the lawyers and wife (Lilian Tintori) of Leopoldo López who endorsed the military’s 2002 coup against President Hugo Chavez and was convicted of inciting violence during the 2014 “guarimbas” protests that sought to oust Maduro. Forty-three Venezuelans died, hundreds were hurt and a great deal of property was damaged during the “guarimbas” protests. Lopez was a key organizer of the recent plan to anoint Juan Guaidó interim president and Tintori met Donald Trump and other international officials, including the prime minister and many others in Ottawa, to build international support for the recent coup efforts.

The “Human Rights Prize” is designed to amplify and bestow legitimacy on anti-government voices. The winner gets a “tour of several cities in Venezuela to share his or her experiences with other organizations promoting of human rights” and a trip to Canada to meet with “human rights authorities and organizations.” They generally present to Canadian Parliamentary Committees and garner media attention. The Venezuelan NGOs most quoted in the Canadian media in recent months criticizing the country’s human rights situation — Provea, Foro Penal, CODEVIDA, Observatorio Venezolano de la Conflictividad, Observatorio Venezolano de Prisiones, etc. — have been formally recognized by the Canadian embassy.

During Rowswell’s tenure at the embassy Canada financed NGOs with the expressed objective of embarrassing the government internationally. According to the government’s response to a July 2017 Standing Senate Committee on Foreign Affairs and International Trade report on Venezuela, “CFLI [Canadian Funding to Local Initiatives] programming includes support for a local NGO documenting the risks to journalists and freedom of expression in Venezuela, in order to provide important statistical evidence to the national and international community on the worsening condition of basic freedoms in the country.” Another CFLI initiative funded during Rowswell’s tenure in Caracas “enabled Venezuelan citizens to anonymously register and denounce corruption abuses by government officials and police through a mobile phone application.”

Just after resigning as ambassador, Rowswell told the Ottawa Citizen: “We established quite a significant internet presence inside Venezuela, so that we could then engage tens of thousands of Venezuelan citizens in a conversation on human rights. We became one of the most vocal embassies in speaking out on human rights issues and encouraging Venezuelans to speak out.”

Can you imagine the hue and cry if a Venezuelan ambassador said something similar about Canada? In recent months there have been a number of parliamentary committee and intelligence reports about Russian interference in Canada based on far less. Last month Justin Trudeau claimed, “countries like Russia are behind a lot of the divisive campaigns … that have turned our politics even more divisive and more anger-filled than they have been in the past.” That statement is 100 times more relevant to Canada/Rowswell’s interference in Venezuela than Russia’s role here.

Recently Rowswell has been speaking across the country on “How Democracy Dies: Lessons from Venezuela and the U.S.”

I wonder if the talk includes any discussion of Canadian diplomats deployed to interfere in other country’s political affairs?