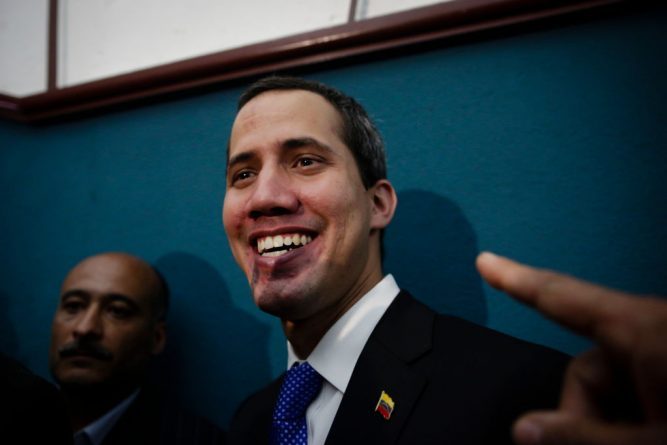 After Juan Guaidó’s fumbling coup attempt in Venezuela, it appears advocates of regime change have fallen flat on their faces. But anti-imperialist mobilization is still as necessary as ever.

In the distant past of several months ago, toppling the government of Nicolas Maduro was not just another of the Trump administration’s cocktail napkin sketches of a foreign policy goal. The cause of saving Venezuela from the evils of Bolivarian socialism should instead have been a project that would unite Democrats and Republicans, #Resistance fighters and Trumpian courtiers, teary-eyed Obama liberals and unreconstructed post-9/11 neocons — though the last two had never been as distant from one another as some half-heartedly pretend.

By the Broadway musical logic of this motley assembly, rallying behind a soon-to-be-reborn Venezuelan democracy (so self-evident that no one need actually vote for it) should have been so obvious, so pressing, so overriding, that the only ones who could oppose such a noble design would be contrarian outliers beyond the pale — people who could and must be safely ignored.

Meanwhile, within the padded cells of respectable opinion, old but never abandoned dreams of regime change stirred, made all the more feverish by the hope that this time, it could be achieved without expensive and unpopular military commitments. This time, little more than the public endorsement of a friendly new stooge delivered by central casting and some diplomatic theatrics would be all that was necessary to secure total victory.

Again, Venezuela was supposed to be easy.

The roots of such hubris were manifold. They began with a quasi-socialist state ravaged by economic crisis — the reasons for which do not, for many, bear close examination — seemingly on the brink of collapse and led by an unfashionable and belligerent premier. Poised against this apparent fish in a barrel was Juan Guaidó, a media-friendly “interim” president — albeit one whose authority lay in a constitution that, until five minutes ago, had been widely dismissed as a tool for dictatorship — whose little-known profile could be made to signify whatever circumstances required.

Add to the mix a large and increasingly desperate opposition, so eager for US support a cynic might almost suppose they could not exist without it; a national military that, the new would-be president assured his eager State-side backers, was ready to turn upon the corrupt and unreliable state apparatus that sustained it; and broad(ish) international consensus willing to share a cause with a Brazilian neofascist and a game show host in the White House. What could go wrong?

As it turned out, a great many things. Despite the self-coronation of his supposed successor, Maduro stubbornly remained, entrenched and unbowed. Furthermore, his government was evidently too smart to make a martyr of Guaidó, who remained free to travel internationally and talk to fawning media. The grim possibility began to emerge that the Venezuelan opposition leader would be just one more Venezuelan opposition leader.

The fact that Maduro not only remained in power, but that his government appeared little more troubled than it already was throughout the economic calamities, escalating sanctions, civil strife, hoarding of goods by private businesses, and regional diplomatic conflict that have marked recent years surprised and baffled those who sought a Venezuela more palatable to Western interests.

Once this became impossible to ignore — several embarrassing months after the United States’ hasty recognition of Guaidó’s presidency — reports emerged that US officials were privately expressing their frustration. Though it was initially predicted that Venezuela’s military would “flip en masse,” the vast majority remained loyal to the sitting government, while a mere 1,500 Venezuelan soldiers defected and were left sitting glumly in Colombia, “waiting for something to happen.”

Elsewhere, Elliot Abrams, the Trump administration’s special envoy for Venezuela — whose record as a full-time Cold War monster on behalf of the Reagan White House and supporting character in the Iran-Contra scandal complicated the arguments of those pretending that there are no echoes of the United States’ blood-drenched past in its current shenanigans — lobbied with little success to expand the shaky coalition dedicated to removing Maduro. Similar failure followed the three separate meetings of the United Nations Security Council convened by the US in its efforts to secure recognition of Guaidó’s shadow government.

“Why hasn’t it broken open yet? Good question,” Abrams commented with piercing insight last month, falling back on an old standard: “I’ll give you part of the answer, and it’s the Cubans.” Yet while Cuba has been a steadfast ally of Venezuela since the election of Hugo Chavez, it has not militarily engaged in foreign struggles since Abrams was first making his name as an apologist for anti-communist death squads. The idea that the nation-state that preceded Venezuela as the United States’ Caribbean socialist boogieman du jour might be frustrating efforts to unseat Maduro is either fanciful or deeply humiliating for Abrams and his cronies.

By April, those who believed the fate of yet another Latin American nation rested upon the US intervening in its once-and-future backyard were growing increasingly anxious. The cracks in their earlier certainty were painfully illustrated by the anti-Chavista comedian Joanna Hausmann in a bite-sized video generously hosted by the New York Times. The illustriously named Hausmann, disturbed by growing protests against US intervention, explained why she felt her “fellow liberals” were making a catastrophic mistake in promoting “inaction” in Venezuela, offering the risible argument: “’Hands off’ can actually mean blood on your hands.”

Hausmann’s evident nerves — along with the hysterical reaction among both Republicans and mainstream Democrats to even marginal opposition to the US foreign policy consensus — should remind oft-frustrated American anti-imperialists that their exploits can sometimes yield results.

The international movement against Venezuelan regime change — which few commentators and fewer coup-plotters saw coming — grew primarily and organically from grassroots activism, rather than being inspired by those rare public figures who have spoken out against US intervention. For that, such protests remain all the more impressive.

The Hawks Come Up Empty
It was against this desperate backdrop that Guaidó launched what he referred to as the “final phase” of his plan to liberate Venezuela. What actually transpired was a staggeringly botched military uprising that, as it turned out, attracted levels of support last seen in Yukio Mishima’s final hours.

This latest gambit fell flat within forty-eight hours, bringing further embarrassment to those who had staked their reputations on Guaidó’s democratic legitimacy.

National security advisor John Bolton, having attempted to wage war on everything else, picked a fight with a dictionary and declared: “This is clearly not a coup.” Much of the Western media took Bolton at his word, although the Washington Post engaged in some semantic exertions before arguing that there is such a thing as a “noble” and “democratic” coup.

The Economist — which has, for over twenty years, regarded Venezuelan socialism in much the same way Captain Hook might react to a ticking clock — decided that the lesson of the failed coup was to “try again.” This is the kind of imaginative thinking that only the free market can deliver.

All of this was very amusing, but the reactions to the anticlimactic putsch served to cement just how much efforts toward regime change in Venezuela have stalled. “This was never going to be something that was quite easy,” admitted the US charge d’affaires for Venezuela James Story in April, as he confirmed that the United States has no actual timeline for a change in the Venezuelan government.

Such conclusions could only be ignored for so long. The hopes that lay behind both foreign and domestic efforts to “restore democracy” to Venezuela have always been predicated on the avoidance of inconvenient but unavoidable questions: were the Bolivarian socialism of Maduro and Chavez to be swept from power, what would become of the mass movement that sustained and empowered their leadership in the first place? What precisely happens when the millions of Venezuelans — overwhelmingly, the country’s poorest — who populated and enacted Chavismo for over two decades find themselves the new national opposition of a US-backed government — particularly once the social programs so many of them rely upon are suddenly abolished amidst all-but-inevitable economic shock therapy?

Guaidó himself, who has offered only vague and evasive explanations for why his most explicit attempt to seize power failed, has told his true base — the international press — that he is “considering” asking the US to intervene militarily, and has sought a meeting with US Southern Command to that end. But even before the April 30 coup attempt, commentators sympathetic to regime change were gloomily starting to accept that, contrary to the darkest fantasies of the anti-Maduro opposition and Marco Rubio, “there is no viable US military option in Venezuela”.

Even Abrams — not a man historically troubled by Latin America death tolls — appeared to rule out explicit military action in early March, when he inadvertently revealed to Russian pranksters posing as the president of the Swiss Federation that earlier threats of such intervention had only been made to “make the Venezuelan military nervous.”

Anti-Imperialism Is Still Necessary
In light of this, the anti-imperialist left — a movement that sees vindication more often than victory — could be forgiven for feeling a swell of satisfaction in the case of Venezuela. However, complacency should be avoided.

The Trump administration — for which saber-rattling is a kind of nervous tic — has not eased off on talk of a more direct US intervention; if anything, such rhetoric has been ramped up. After the failure of Guaidó’s coup attempt, Secretary of State Mike Pompeo confirmed that military action “is possible.” This claim was convincing enough to spook some US lawmakers, who have increasingly pressed administration hawks to explain what such an operation would look like, and what precisely it would achieve beyond bloodshed. They shouldn’t hold their breath for an answer.

For the foreseeable future, the US cannot simply unseat Maduro and seize control of the Venezuelan government. In fact, as recent events in Washington DC have demonstrated, it has considerable difficulty even seizing the Venezuelan embassy, which was occupied by Code Pink activists for over a month until their forcible removal on May 16.

Like a child deprived of its favorite toy, sullen US hawks are now faced with the reality that there is no easy military shortcut to their geopolitical goals in Venezuela. However, advocates of regime change have never been on speaking terms with reality, as the recent increased likelihood of a US war with Iran has made clear. The possibility remains that the obstacles encountered in Venezuela will only make them more maniacally determined. The dangers and the injustice of intervention in sovereign nations have been ignored before, as much of the world needs no reminding.

For anti-imperialists in 2019, the lesson of Venezuela is that, against all odds, erecting obstacles to such intervention is now both demonstrably possible and arguably more effective than it was in the early days of the “war on terror.” But war takes many forms.

As Empire Files journalist Abby Martin pointed out in January, current US sanctions against Venezuela “are not an alternative to war. They are war, in every way.” According to an April 26 paper from the Center for Economic and Policy Research, such sanctions led to an estimated forty thousand Venezuelan deaths between 2017 and 2018, and will lead to many thousands more since their intensification.

This crime against humanity, these means by which a country and a people are bled and starved into submission without a shot being fired, continues even now. While Guaidó practices his impression of a president and the US political establishment fruitlessly attempts to impose logic upon Trumpian foreign policy, this alone adds greater urgency to the task of the anti-imperialist left. For Venezuela’s sake, it must not falter in its efforts.