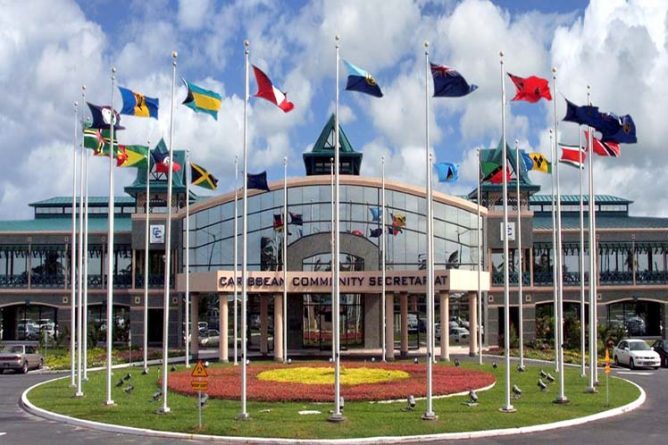 As political and economic events unfold in various countries in the region, including Haiti, Venezuela, and Guyana, the 15-member group aims to de-escalate tensions.

Caribbean Community (CARICOM) leaders concluded a two-day summit Tuesday in Basseterre, on the dual-island nation of St. Kitts and Nevis, where the member countries once again reiterated their support for a peaceful resolution in regards to Venezuela while rejecting interference.

“Our community could be justifiably proud of our stance and efforts to help the people of Venezuela resolve their crisis. I have no doubt in my mind that the principled position taken by CARICOM working with like-minded countries has prevented so far a catastrophe on our borders. We will continue to urge that dialogue is the only way to achieve a lasting solution,” said CARICOM chairman and host Prime Minister Dr. Timothy Harris

He commended Barbados, Trinidad and Tobago and the Secretary-General of CARICOM for “promoting and supporting a peaceful resolution to the situation in Venezuela.”

In a statement published on CARICOM’s website after the summit, the organization said, “The Community maintains that the solution must come from among the Venezuelan people and abides by the internationally recognized and accepted principles of non-interference and non-intervention in the affairs of states, respect for sovereignty, adherence to the rule of law, and respect for human rights and democracy.”

CARICOM has intended to play a leading role in trying to diffuse the situation in the South American country of Venezuela where opposition lawmaker Juan Guaido, who declared himself interim president, is leading an effort to remove President Nicolas Maduro from office.

Guaido has the backing of the United States and several other right-wing governments in the region, while many nations in the global south, continue to recognize President Maduro as the country’s legitimate president despite pressure from western nations.

Over the last weekend, the military in Venezuela prevented the so-called aid from Washington from entering the country through Brazil and Colombia and United States Vice President Mike Pence met with Guaido in Bogota Monday to announce more sanctions on Caracas.

In later meetings, Harris, who led a CARICOM delegation to Uruguay, is expected to bring all the leaders up-to-date on the Montevideo Mechanism in response to the call by the United Nations Secretary General Antonio Guterres to find a pathway to a peaceful resolution through dialogue and from a position of respect for International Law and Human Rights.

Earlier this month, Harris said the proposal presents “the only objective mechanism” to address the complex political situation in Venezuela and that it is the only initiative available for international actors “who want to see peace in Venezuela”.

“We expect that the Montevideo Mechanism will become a landmark document in terms of moving forward. Not only will it survive in the context of what is happening in the Republic of Venezuela, but I believe it provides a platform, if you will, a framework for engagement in other disputes that would impact upon us,” Harris said.

As the Venezuela crisis continues, a political situation is unfolding in Guyana,where the coalition government of President David Granger has collapsed after the main opposition People’s Progressive Party (PPP) had been able to successfully move a motion of no confidence in the National Assembly Dec. 21, 2018, where the government had enjoyed a one-seat majority.

The Granger administration has since filed a motion in the Appeal Court seeking to overturn a High Court ruling in January that the motion was valid and which refused to provide a conservatory order, thereby halting the 90 day period required by the Guyana Constitution for new elections to be held — once a motion has been successfully passed against the government.

Simultaneously in Haiti, the only French-speaking member within the CARICOM group, political protests over government corruption and high oil prices have also been ongoing.

President Jovenel Moise, who took up office in 2017 following protracted elections, is under pressure from opposition parties to step down over his handling of domestic affairs as well as the use of funds under the PetroCaribe an oil alliance of many Caribbean states with Venezuela.

Several people have died since the street demonstrations started. In an earlier statement, CARICOM said the organization “is deeply concerned about the continuing violent protests in Haiti, which have resulted in the loss of life, property, destruction of infrastructure and caused grave distress.”

“The Community calls for calm and a cessation of the violence, appealing to all involved to engage in constructive dialogue and to respect the Constitution, the rule of law and democratic processes so that issues can be resolved in a peaceful atmosphere and allow for the return to a state of normalcy,” CARICOM said. President Moise has already indicated that he does not intend to step down, acknowledging that “the crisis we are going through is very serious”.

In all of this, the Guyana-based CARICOM Secretariat said that enhancing regional air and maritime transportation and further advancing the CARICOM Single Market and Economy (CSME) that allows for the free movement of goods, skills, labour and services, across the region, will be among the matters for deliberation.