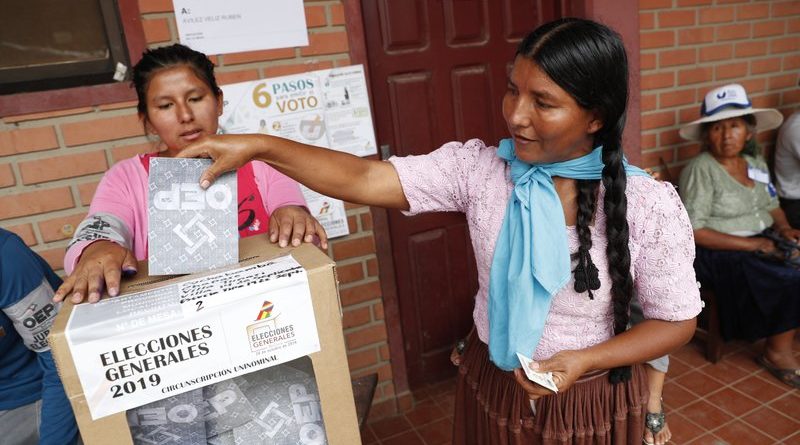 Washington, DC ― The Organization of American States’ final audit report on Bolivia’s October 20 elections appears intended to “justify the organization’s … unsubstantiated claims of fraud,” a preliminary analysis from the Center for Economic and Policy Research (CEPR) finds. The CEPR analysis, by Senior Research Associate Jake Johnston, constitutes CEPR’s initial review of the OAS audit report; a more complete analysis is planned for release at a later date. While the OAS report does not mention CEPR’s earlier analysis of the election results by name, it does include what are clearly intended to be references to it.

“The OAS audit report raises more questions than it answers,” Johnston said. “Not questions so much about the elections or the electoral process, but about the OAS’s trustworthiness in conducting the audit and reporting its results.”

CEPR Co-Director Mark Weisbrot noted that the OAS Electoral Observer Mission has committed serious and puzzling errors throughout its reporting on the Bolivian election. These errors began with the first press release, the day following the election, when the mission expressed “deep concern and surprise at the drastic and hard-to-explain change in the trend of the preliminary results.” In fact, this change was neither drastic nor hard-to-explain, but simply a result of pro-MAS voting areas tending to report later than other voting areas.

“It’s amazing that in its fifth publication on the election, the OAS once again refused to consider the possibility that this ‘change in trend’ had a simple explanation, which can be seen in basic arithmetic analysis of the election results, as well as statistical analysis,” said Weisbrot.

CEPR’s analysis finds among the most problematic aspects of the OAS’s final audit report:

● The OAS performed a verification exercise meant to check the validity of the tally sheets themselves, and did not report the results of that exercise anywhere in the final audit report.

● There is no evidence in the report that the OAS auditors cross-checked the tally sheet images posted publicly online with any of the copies of the physical tally sheets that are provided to political parties, notaries, and local electoral officials on the day of the vote.

CEPR’s preliminary analysis also notes a troubling lack of transparency in the OAS’s methodology: “the auditors note that 894 tally sheets, out of a statistical sample of 2,863, were analyzed in order to cross-check with original electoral material.” No reason is given for why these particular 894 tally sheets were chosen.

The CEPR briefing notes that the OAS audit is

decontextualizing the evidence that they do provide, burying results that run contrary to their stated findings, and concealing evidence that they almost certainly have but do not report …. The final audit report is an attempt to mislead the public and justify the organization’s — and its outspoken secretary general, Luis Almagro’s — unsubstantiated claims of fraud in the October 20 election in Bolivia.