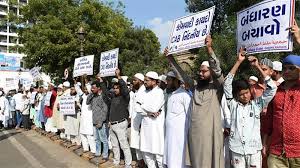 Indian Muslims on Friday (December 13) across the country took to the streets in agitation against the new citizenship legislation.

Violent protests have erupted since the controversial Citizenship (Amendment) law was passed by the parliament earlier this week. On Friday, huge crowds of Muslim protesters rallied on the roads in several cities like Bengaluru, Hyderabad, and Kolkata, carrying placards, and banners.

The new citizenship law lays out a path of Indian citizenship for six minority religious groups from neighboring Bangladesh, Pakistan, and Afghanistan, but it does not extend the same protestation to Muslim migrants.

Prime Minister Narendra Modi’s Hindu nationalist government has said the bill was meant to protect minorities from those countries.

Featured image: Muslim demonstrators hold banners and placards as they participate in a peaceful protest against the Citizenship Amendment Bill (CAB), in Ahmedabad, India, on December 13, 2019. (Photo by AFP)