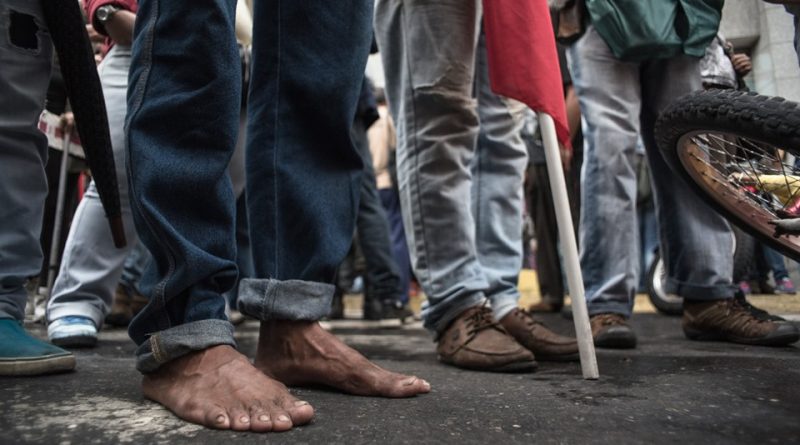 Even today, some Chavista mobilizations resemble overflowing rivers: human flows with such great energy that it is impossible to channel them. A bustling, enthusiastic and multicolored force that seems conceived to keep flowing, beyond its springs, tributaries and destinations. It little matters the ocean where they will flow.

In the rather modest demonstrations, the panorama can be very different: frequently, the popular flow stumbles, without being able to cover them, over some points of concentration where very well uniformed people rest, almost always dressed in impeccable red, coming from some government office. They are people who see the mobilization pass, but do not express any intention of mixing with it. Often you can even notice the different class origin: as a rule, those who advance belong to the popular classes, while the civil service remains static and silent.

The greater presence of one or the other allows identification when it comes to extraordinary or routine mobilizations: in the first, the civil servants are present, of course, but are dragged by the popular force, and it is very difficult to distinguish them; in the latter, on the other hand, its presence is more visible, and eventually it manages to impose its leisurely rhythm, like a river bathed by a light drizzle that does not wet and does not soak, which passes as if it had no ambition to reach any ocean. As an ambivalent flow, which is and is not at the same time, or that marches without wanting to march.

There are also those who would like to march, but for different reasons they fail to do so, and there are those who leave the country, although they would like to stay in it, and continue to be part of the overflowing river that may come to be Chavismo in the street.

That even at this point it is necessary to specify that many of the millions who have decided to leave the country identify with Chavismo, speaking of how difficult it is for us to deal with a sensitive issue, because it involves affections and tests our deep convictions.

I am convinced that, in the current circumstances, what corresponds is to remain in the country and fight for it. But my very personal conviction does not have to be the conviction of anyone else, nor do I consider that any one is betraying anything by leaving. I have not sympathized with imposed ethics for a long time, and I have no intention of starting to do so at this moment.

I am equally convinced, because there is ample evidence of this, that the bulk of those who leave are economic migrants. Let us forget for a moment the speech of the imperial propaganda machine, the same one that repeats the anti-Chavismo, and its deceptive figures on refugees and asylees. Economic migration is an incontrovertible fact, and the main cause is the hybrid war that weighs against Venezuela. It is at this last point that we have to emphasize, instead of wasting time with speeches dotted with morality, to see traitors or enemies where there really are casualties of a new type of military confrontation.

It is also an indisputable fact that one of the consequences of the hybrid war is the partial destruction of the national economy. In fact, the central objective of the enemies of the Republic is to undermine the bases of the Nation-State, make it unfeasible, and that is why they use so much energy to stimulate corruption within the civil and military levels.

Regarding the latter, I remember the story of a friend who was unjustly held at a police check point, in the North Ring of Barquisimeto. They did not allow him to continue on his way until he paid something to the corrupt officer. At some point he managed to start a separate conversation with a policewoman, who acknowledged, ashamed, that an outrage was being committed, and told him that she did not agree. She told him that this happened so often that she felt discouraged, frustrated, and that she was only thinking of leaving the country with her family.

To all of the above, we must add government errors in economic policy. Under such circumstances, how could a massive phenomenon of economic migration not occur?

I insist, a very different thing is the version of the events that the anti-national propaganda machinery tries to impose: both its agents and the average anti-Chavista feel at ease in portraying an infernal country since Venezuela in revolution always seemed like hell to them, no matter if as of 2004, once the very serious damage caused by the oil strike-sabotage of 2002 were overcome, the Venezuelan people lived the best decade of their history.

Self-denigration defines them: only in Venezuela can the worst things happen. The Bolivarian revolution is the clearest demonstration of this. They despise the Bolivarian people, as much as the country in which they can be protagonists. They miss only the country where they were masters and lords or aspirants to be, and in which the great national majorities remained lethargic and on the sidelines. Now that the hybrid war rages on the popular classes, they act as if time has proved them right.

The logic is more or less as follows: if you are a Chavista, now pay the consequences. If you were (Chavista), you are guilty of having been. Venezuela is such a hell that even the Chavistas or those who were, are fleeing the country. If you are or were a Chavista, you have no right to escape. Only to hell.

But it is clear that it is one thing to decide to leave and another to flee or escape. As true as Venezuela is not hell, nor is the Chavista guilty of anything, even when he must leave, for whatever reason.

In any case, there are also those who decide to remain in the country they despise, and there are even those who attend Chavista mobilizations, but with no intention of mixing with the people. Their soul lives elsewhere. Similarly, outside the country there are people from humble origins through whose veins a torrent flows that may flow into seas that are not those of the homeland, but that are part of the same indomitable river of those who fight for it, disregarding the place where they live.