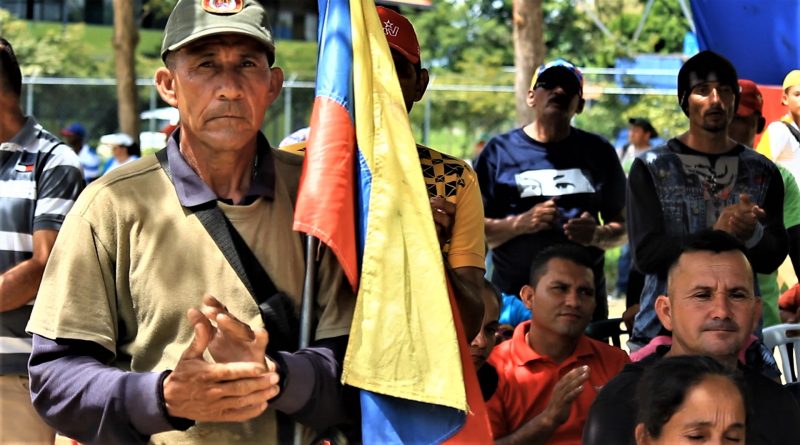 One week ago, six militants belonging to the Hugo Chávez Popular Defense Brigades of the Bolivar and Zamora Revolutionary Current (CRBZ) were assassinated in Ticoporo Reserve in Barinas State. Popular movements, local officials, constituent assembly deputies, and friends and family members gathered over the weekend in emotional tributes to the victims.

This past weekend popular movements, local officials, constituent assembly deputies, leaders of diverse Chavista political parties, as well as friends and family of the victims united to pay tribute to the six Chavista activists who were assassinated on July 27, an event which is referred to by the Bolivar and Zamora Revolutionary Current (CRBZ) as the “Ticoporo Massacre.”

Participants expressed their indignation for what they believe to be part of a systematic “counterrevolutionary attack against Chavista militancy”. Orlando Zambrano, national constituent assembly member and member of the CRBZ, alleged that the violence was organized and executed with “the participation of [large scale] cattle farmers, former security agents and paramilitaries.”

Yenifer Urbina, municipal council member for the United Socialist Party (PSUV) and activist of the CRBZ, referred to the assassinations as a massacre and declared that “we are not afraid, we will not leave this be, we demand justice!” Alibeth Navas, sister to one of the victims and also member of the CRBZ, seconded the call for justice and stated that “no one will shut us up.”

Those who presided the tribute expressed frustration at the apparent lack of action from crime-fighting forces and the CICPC investigative police. Nine days after the assassinations occurred, there has been no official information released from investigative forces nor the Attorney General’s office.

Juan Carlos Guevara, general secretary of the Chavista party Homeland for All (PPT), stated in his intervention that “there can’t be so much impunity in a revolution”.

Ángel Prado, constituent assembly deputy and leader of El Maizal commune in neighboring Lara State, expressed “This outrages me, if those responsible for creating justice don’t do it out of fear, the peasants must rise up…” after holding up a bullet shell still left on the ground.

The massacre follows a number of campesino assassinations this year, most of which have gone unpunished, including that of Communist leader Luis Fajardo in Merida State in November.

RELATED CONTENT: La Via Campesina Stands in Solidarity with the Victims of the Barinas Massacre

Popular movements in Caracas also paid tribute to those referred to by the CRBZ as the “Ticoporo Martyrs” in the Los Caobos Park and the Cultural Center of Parque Central.

The Patriotic Force “Alexis Vive,” the Movimiento de Pobladores y Pobladoras, the Other School (La Otra Escuela), the Otro Beta Movement, the National Network of Communards, Surgentes Collective, the Platform of Peasant Struggle, Askapena of Euskal Herria (Basque Country), and the popular movement Patria Grande from Argentina were among those organisations which expressed their solidarity and demands for justice.

In the event held in Caracas, Kevin Rangel, natilonal coordinator of the CRBZ, warned that the deaths of the six members were not “isolated actions,” relating them to the advances of US imperialism through the reactivation of “paramilitarism, principally since January of this year.”

The various popular movements, individuals and political figures present at the tributes held in both Caracas and Barinas resoundingly called for an in-depth police investigation and justice for the fallen.

Photos by Katrina Kozarek of Venezuelanalysis.com and Carolina Cruz of CRBZ Press