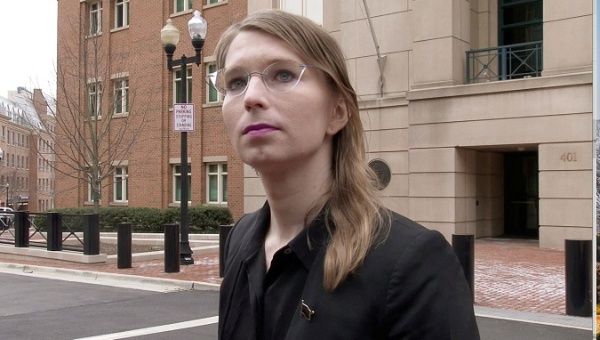 She was simultaneously subpoenaed to appear before a different grand jury on May 16, meaning she could be found in contempt again for refusing to testify and returned to jail, her lawyers said in a statement.

Former U.S. Army intelligence analyst Chelsea Manning, who was being detained for refusing to testify before a grand jury, was released on Thursday and immediately summoned to appear before a new grand jury next week, her lawyers said.

Manning was released after the term expired for the previous grand jury in Virginia that was seeking her testimony in connection with what is believed to be the government’s long-running investigation into WikiLeaks and its founder Julian Assange.

She was simultaneously subpoenaed to appear before a different grand jury on May 16, meaning she could be found in contempt again for refusing to testify and returned to jail, her lawyers said in a statement.

Manning had appeared before the grand jury in early March but declined to answer questions.

She was jailed for 62 days for contempt of court. A U.S. appeals court denied her request to be released on bail and upheld the lower court’s decision to hold her in civil contempt for refusing to testify.

“Chelsea will continue to refuse to answer questions, and will use every available legal defense to prove to District Judge (Anthony) Trenga that she has just cause for her refusal to give testimony,” the statement said.

** Feds released Chelsea a few hours ago after Grand Jury expired – @EDVAnews prosecutors subpoenaed her to appear a 2nd time for a different grand jury – but for same questions – on May 16th – official statement from her pending https://t.co/BkXDxnrLmZ

It is unclear exactly why federal prosecutors want Manning to testify, although her representatives say the questions she was asked concern the release of information she disclosed to the public in 2010 through WikiLeaks.

Manning was convicted by court-martial in 2013 of espionage and other offenses for furnishing more than 700,000 documents, videos, diplomatic cables and battlefield accounts to WikiLeaks while she was an intelligence analyst in Iraq.

After nearly seven years of giving Assange refuge in its embassy in London, Ecuador on April 11 ended its protection and he was arrested by British police.

The United States is seeking his extradition to face charges of conspiracy to commit computer intrusion. Assange plans to fight the U.S. extradition request.