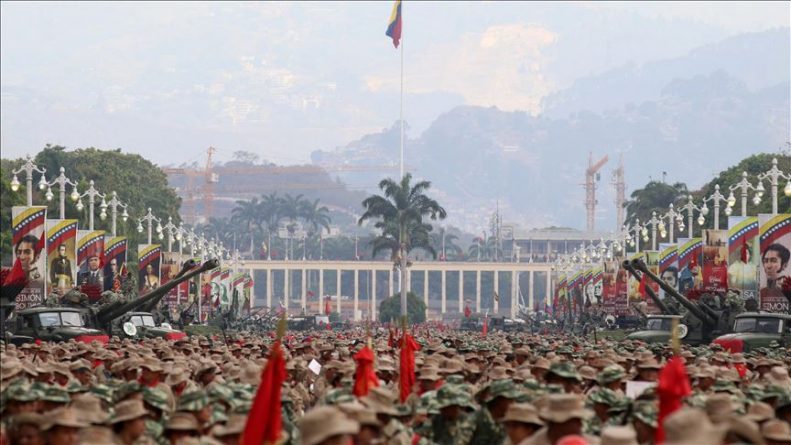 News Security and Defense
May 10, 2019 orinocotribune Col. Wilkerson, lost in space, Pompeo, Pompeo in Maduros payroll, Trump, Trump not knowing what to do, US Imperialism, us military aggression

Col. Larry Wilkerson describes the limits of a ‘gringo invasion’ and warns of repeating the failures of Vietnam and Iraq.

Last week, when Venezuela’s opposition leader Juan Guaido tried to call on the Venezuelan military to abandon President Maduro in what many called a coup attempt, the Trump administration accused Russia of helping Maduro thwart the plan. Then, last Friday, President Trump had an extensive phone call with Russia’s President Vladimir Putin where they discussed Venezuela, amongst several other issues. Meanwhile, Venezuela’s Foreign Minister Jorge Arreaza visited Moscow to meet with Russia’s Foreign Minister Sergey Lavrov. Following the meeting, Lavrov said very clearly that U.S. sanctions on Venezuela violate international law and are aimed at toppling the legitimate government of Venezuela. Finally, on the sidelines of an international meeting in Helsinki, Finland, on Monday to discuss an agreement on how to deal with the climate change crisis in the Arctic, Lavrov met with Secretary of State Mike Pompeo to address the issue of Venezuela.

Joining me now to take a closer look at U.S.-Russia relations over Venezuela is Col. Larry Wilkerson. He is the former chief of staff to Secretary of State Colin Powell. Now he’s a distinguished adjunct professor of government and public policy at the College of William and Mary. Thanks for joining us, Larry.

SHARMINI PERIES All right, Larry, you had a very interesting meeting last week, and that was with the foreign minister of Venezuela, Jorge Arreaza. Now, I know Arreaza had also met with Foreign Minister Lavrov, the foreign minister of Russia. And I am sure, given the current situation in Venezuela, you discussed the escalating situation that Venezuela is facing. And I know in the past you’ve had quite a bit of experience with the Venezuelan military. So give us a sense of your takeaways from that meeting with Jorge Arreaza.

LARRY WILKERSON Sharmini, their foreign minister, as you well know, I think you’ve met with him, is a young man who is very impressive. He is on top of his brief. He’s on top of Venezuela’s history and its remarkable devotion to democracy over the years. Its military is more or less [in] support of, always, the constitution. One of the things that troubled me so much about Elliott Abrams, Mike Pompeo, John Bolton, and the administration’s approach to Venezuela, is how they treat them as if they were Panama or they were Honduras. They are not. I’ve worked with the Venezuelan military. They’re very professional. I would place them at the top of the list for South America. That puts them above Argentina, above Chile, whose militaries are quite competent, too. And I would say that Mr. Trump ought to be very, very careful about saying he’s going to send Marines or soldiers to Venezuela because the Venezuelan military will be unified immediately. It will take to the hills and it will fight us as the Vietnamese did during the Vietnam War, and as the Taliban are in Afghanistan right now: To the last Marine, to the last soldier. And we’ll be going home, and we will not be very successful there.

And let me just say something about the incompetence of Gina Haspel and the CIA. And I know about the incompetence of the CIA; I’ve been up close and personal with it for over half a century. This was probably the most incompetent bunch of people trying to pull off a coup against Nicolas Maduro in Caracas that I’ve ever seen. In the last week, they have demonstrated that they can walk into the White House and tell the president everything is fine, Juan Guaido will be the winner, Leopoldo Lopez will be the winner. Everything is gonna be fine. We are now positioned to pull off the coup and put Guaido in the leadership role he should be in, so blah, blah, blah, blah, blah. And it completely failed. It completely collapsed. I’d have fired Gina Haspel, I’d have fired half the CIA, and I probably would have taken some action against some other people too, including the National Security Adviser, maybe Elliott Abrams, maybe some others, and I’d have certainly backed off some of the people who are leading my policy with respect to Latin America right now, like Rick Scott and Marco Rubio. This was a display of American incompetence in its own hemisphere, unparalleled.

SHARMINI PERIES Now, that’s really interesting, Larry, that Putin and Trump spoke with each other, and Venezuela was one of the key issues. Do you think the conversation actually diffused tensions that existed between Venezuela and the United States, and now Russia getting involved? Or do you think this might have escalated the tensions?

LARRY WILKERSON Well, you have President Trump actually contradicting Secretary of State Pompeo and his National Security Adviser, and that’s good. Anytime he contradicts them, that’s good. I think Putin probably gave him some advice. Putin is probably one of the–no matter how draconian, mafioso-like, or whatever we may think he is, he’s probably one of the most strategically-oriented, strategic thinking leaders in the world. And if he got Trump aside and he said something like I just said to you, you don’t want to do this. This would be very stupid. You’ll solidify the military. They’ll be opposed to you and you alone. It won’t matter who’s the president down here because they’ll just be taking you on. And Trump listened to it. I think Trump seems to have, for whatever reason, great respect for Vladimir Putin. And as far as I’m concerned, more power to him, because if Putin gave him advice like that, it was very sound and very good advice.

SHARMINI PERIES All right, Larry. I will let you get back to your garden, and looking forward to having you here next week.

LARRY WILKERSON Thanks. Appreciate it.

SHARMINI PERIES And thank you for joining us here on The Real News Network.