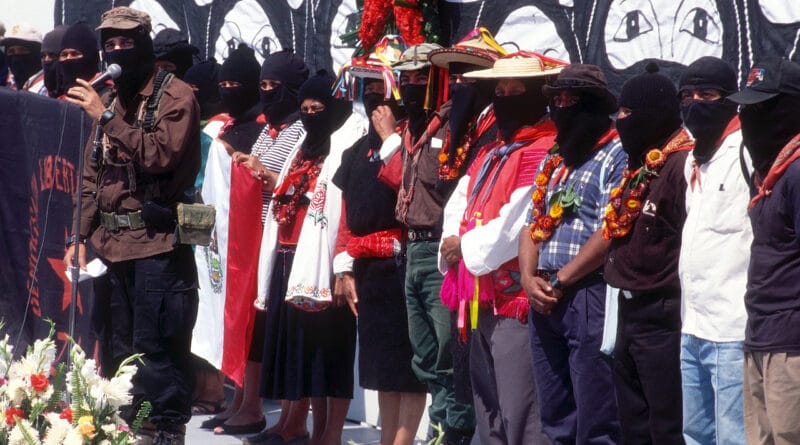 Chiapas is on fire. The bosses of the paramilitary forces have turned them loose and they have become bold enough to act in their typical way. They are attacking rebel communities with firearms and are even showing up armed and in uniform, to disarm government police agents, as they did in Santa Martha.

Just this August 22, a group of shippers belonging to the Regional Organization of Coffee Growers of Ocosingo led by Tomás Santiz Gómez, looted and burned two coffee warehouses that were bases of support for the Zapatista National Liberation Army (EZLN) in the community of Cuxuljá, in the rebel town of Moisés Gandhi, the Zapatista name for Ocosingo.

Cuxuljá is a little town next to the road between San Cristobal and Ocosingo. It is surrounded by eight autonomous Zapatista districts and is a junction for several communities. It was occupied by the Army until 2001. The soldiers withdrew from this position to comply with the three agreements that the EZLN required of the Vicente Fox government in order to re-establish a dialogue.

The withdrawal of troops did not “pacify” the region. As soon as the dialogue failed, due to the approval of constitutional reforms concerning indigenous peoples’ rights and culture that were not compliant with the San Andrés Accords, the paramilitary group Orcao began attacks against the rebel bases in this community. Their objective was to occupy the territory left open by the troops.

The Orcao paramilitary was not always like this. For several years they had a close relationship with the Zapatista movement. However, they broke this connection between 1997 and 1999, and their leaders began to compete for the rebel social base, with economic support and government jobs given to their leadership. When Pablo Salazar became governor of the state (2000-2006), the conflict escalated. In 2002, the aggression of the coffee-growers organization against the Zapatistas bases became more intense, to the point of destroying a rebel wall mural; for all practical purposes it had changed into a paramilitary force.

The Orcao was organized in 1988, with 12 communities of Sibacjá, in the district of Ocosingo. Shortly thereafter, other communities joined them, until there were almost 90. Their original demands were concerned as much with the price of coffee, which fell drastically in 1989, as with agricultural backwardness. Influenced by the progressive pastoral work in 1992, in the context of the commemoration of 500 years of Indigenous and Black peoples resistance, they defended indigenous peoples’ self-determination, opposed the reform of Article 27 of the constitution and demanded freedom, justice, and democracy.

However, they underwent an unstoppable degeneration. They were expelled from the National Union of Autonomous Regional Peasant Organizations (UNORCA) in 2015. In an internal division, two groups fought for power – the faction of Jose Pérez, linked to the Greens and to control of passenger transport, and the faction of Juan Vasquez, who was Commissioner for Reconciliation in the government of Juan Sabines, and which was more oriented toward production. As allies to various governments, the leaders have utilized public administration positions for their personal benefit. Many of them were part of the Party of Democratic Revolution, the Ecological Green Party of Mexico, and now of the Morena Party.

There is a long history of Orcao aggressions against Cuxuljá. As a result of the armed uprising, the support bases of the EZLN, (a collective group of 539 campesinos) were given the use of 433 hectares (about 1070 acres of land expropriated from the landowners. They received a “deed of turn-over and reception of land” from the Secretary of Agrarian Reform.

The Zapatistas work the land collectively and refuse to parcel it out individually. They affirm that to do so would be like returning to 1994. However, a small group of the Orcao, who had abandoned the community and sold their houses and, originally supported by the Army and the police, has been insisting for 19 years on dividing the property, getting certificates of ownership and selling individually what was the product of common collective struggle.

The attacks by Orcao on the bases of support of the EZLN have been constant. They are not limited to Cuxuljá; they have involved several districts. The most recent was carried out last February 23 in Chilón, where the Orcao themselves, the Chinchulines, and Morena Party members abused and kidnapped community representatives as a reprisal for participating in the Jornadas en Defensa del Territorio y la Madre Tierra “Samir Somos Todas y Todos” – the Campaign for the Defense of our Territory and of Mother Earth – We Are All Samir (Samir Flores Soberanes, an activist and journalist, was shot twice in the head in his home in Amilcingo in February.)

These aggressions have been carried out on a regular basis within the context of government offensives that try to weaken the Zapatista movement and limit its advance. They are not the result of inter-community fights; they are the result of a government strategy of manufacturing internal conflicts. Each government in turn, even the current one, have supported Orcao with economic resources, projects for production, many having to do with live-stock ranching, as well as providing police protection, and political cover. This is all done in an attempt to erode and exhaust the EZLN.

Just one year ago, the rebels announced the creation of seven new caracoles ( regional organizing groups) in addition to the five already in existence. This represents a total of 43 demands for self-government without relationship to government agencies. In addition, they have announced their rejection of the Mayan Train and of the Inter-Oceans Corridor. The new battle of Cuxuljá and the incessant war of the paramilitaries in Chenalhó are part of a strategy of containment against the advance of the Zapatista movement. A strategy that apparently isn’t worried about setting the state on fire in the process.