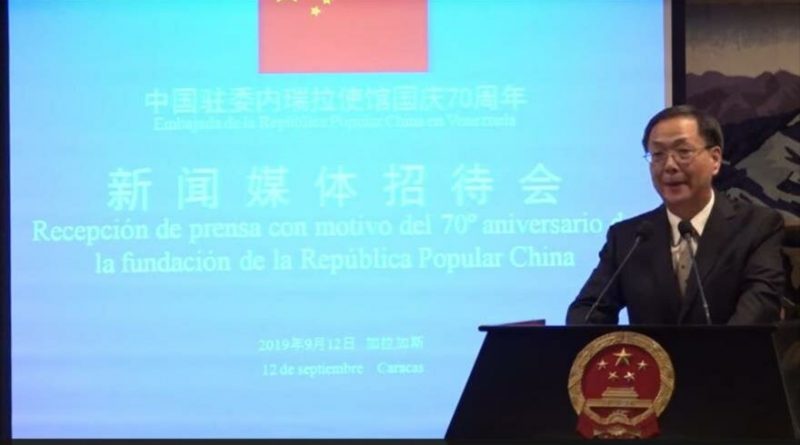 China asserts that it supports Venezuela in defending its national sovereignty and denounces the interference of the United States in the internal affairs of Beijing and Caracas.

The Chinese ambassador to the South American country, Li Baorong, stressed on Thursday that Beijing rejects any outside interference in the internal affairs of Venezuela and insisted that the problem must be resolved through politics and dialogue and within the framework of the Venezuelan Constitution.

In statements offered to the media on the occasion of the commemoration of the 70 years of the People’s Republic of China, the diplomat highlighted that China and Venezuela are friends of mutual trust and maintain strategic cooperation, and denounced the Western media campaign against China in order to misrepresent facts for political purposes.

RELATED CONTENT: Pro-Hong Kong Rally in DC Against “CHINAZI Regime” Being Sponsored with US Govt-linked Money

In this regard, he mentioned the case of the demonstrations in Hong Kong and raised his voice to emphasize that this matter is purely internal to China, and urged the United States and western countries not to intervene.

Hong Kong has experienced massive mobilizations since last June against a bill that would allow extraditions to mainland China. The Hong Kong local government suspended the controversial law on June 15, but the protests continued with violent episodes because the corresponding amendments have not been completely revoked.

“China and Venezuela are victims of the practices of unilateralism, interventionism and bullying, but at the same time they are strong advocates of the democratization of international relations and international equity and justice,” he said.

After the self-proclamation as “president in charge” of Venezuela by Juan Guaidó, head of the National Assembly (AN) in contempt since 2016, several Western countries, especially the US, pretending that the re-election of President Nicolás Maduro was not legitimate, supported the coup d’etat of the young politician.

However, China, among other countries, has rejected the US coup plan and has ratified its support to Caracas in the face of the “cruel sanctions” and economic pressures of Washington.

Featured image: Li Baorong, Chinese ambassador to Venezuela, speaks at the commemoration of the 70 years of the People’s Republic of China in Caracas, September 12, 2019.