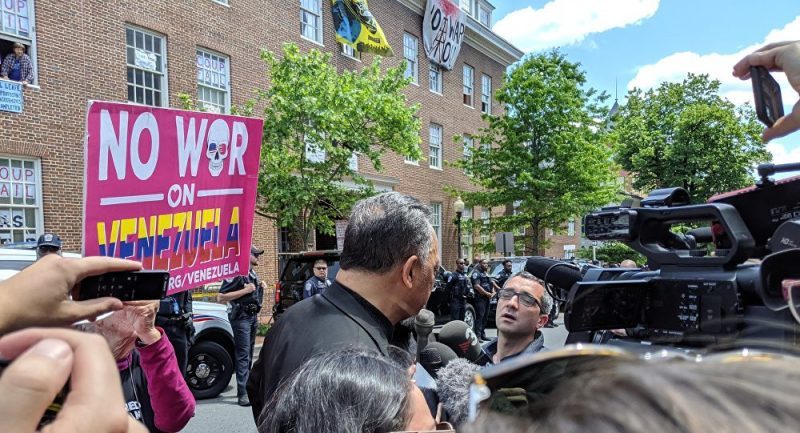 On Wednesday, anti-war activists supporting the Embassy Protection Collective in Washington, DC, finally got supplies to those holed up inside ‒ with the help of legendary civil rights leader Rev. Jesse Jackson, of course.

Since April 30, a group of anti-war activists have been besieged inside the Venezuelan Embassy in Washington, DC, where they have enjoyed Venezuelan government approval of their stay in order to hold the facility for a neutral caretaker government. The US wants to place Carlos Vecchio, the ambassador appointed by self-proclaimed Venezuelan Interim President Juan Guaido, in the embassy offices as the country’s new envoy to Washington, but is blocked from evicting the activists inside by international laws that protect the inviolability of embassies — and the presence of watchful activists outside.

Pro-Guaido protesters in Washington, DC, have blocked entry and exit of the facility, however, making getting food, water and other supplies into the facility extremely difficult. An attempt on Monday ended in a brawl outside the facility, which is located beside a canal in the capital’s historic Georgetown neighborhood.

Police openly aid the opposition in blocking a delivery of food to the #EmbassyProtectionCollective pic.twitter.com/24gOqb9T3m

As news of the plight of the collective in the embassy spread, it caught the attention of celebrities, including “Baywatch” star Pamela Anderson, rock star Roger Waters and Democratic Party presidential candidate Mike Gravel, all of whom tweeted about the group.

RELATED CONTENT: Social Movements of Venezuela in Solidarity With the Embassy Protection Collective in Washington Jackson’s attention, too. He came down the embassy’s narrow one-way street Wednesday afternoon with several bags of supplies for the handful of activists who remain inside.

A black civil rights activist and leader who marched alongside Rev. Dr. Martin Luther King Jr. during the struggles of the 1960s, Jackson is known for his advocacy of peace and nonviolence. In 1984, Jackson formed the Rainbow Coalition — a nod to the multi-racial political alliance forged by Black Panther leader Fred Hampton in Chicago in 1968, before he was assassinated. Like Hampton, Jackson intended to bring together poor people of all ethnic groups as well as gays, lesbians, working mothers, and more — but this time in support of his progressive presidential bid, which he ultimately lost.

Unlike several days before, the area around the embassy was cleared of protesters Wednesday, with only police barricades and officers on watch to keep people away from the building’s walls. Protesters were confined to pens on the opposite side of the street. Speaking to press outside the embassy, Jackson said, “I stand with Code Pink and the Venezuela peace activists fighting to end the war in Venezuela. I’m going to attempt to take some food and water to those who are locked up on the inside. They’re in there without water or food, the lights are turned off, and so we want to stand with them. I hope that we can be heard here and in Venezuela.”

Jackson said that “attempts to pull off a coup” in Venezuela are “beneath our foreign policy.”

“Our foreign policy is incoherent… we’ve become more isolated as a country, and it’s making us less secure, not more secure.”

He was accompanied by Ajamu Baraka, who ran for vice president on the Green Party ticket in 2016 and who serves as national organizer for the Black Alliance for Peace, one of the anti-war groups that helped form the Embassy Protection Collective. As Jackson’s retinue approached the police barricades in front of the embassy, several opposition protesters ran up to them, saying, “We invite you to send this food to Venezuela… we need help in Venezuela,” before grabbing at the bags of food. A scuffle broke out as pro-collective protesters struggled to retake the food, restrain the opposition protesters and get the police to react to the theft that occurred in front of them.

“Do your jobs!” pro-collective activists looking on chanted at the police during the struggle.

After several minutes, Jackson was able to get control over the supplies and get four bags of food, water, and spare batteries up into the embassy via a pulley system in a second-story window.”

Let us remain nonviolent and focused,” Jackson said in comments after the food delivery was concluded. “Let us not engage even in violent rhetoric. Our mission is to pull the sides together, not to expand war… International law must be observed… We should not sympathize with the overthrow of the government in Venezuela.”

“Venezuela needs food and water, not bullets and bombs. We must stop the war in Venezuela,” Jackson said, indicated to a reporter he would “of course” come back to the embassy again if more supplies were needed.

I talked to Reverand Jesse Jackson who denounced the attempted starvation of Venezuela as well as US imperialism against Yemen, Syria and Afghanistan pic.twitter.com/GRbvHXvrqa

“I care for peace in our world,” Jackson told MintPress News journalist Alexander Rubinstein. “War is expensive and war is futile. We cannot starve Venezuela into submission. We must use aggressive diplomacy and bring both sides to the table and, with the help of the United Nations, figure out a conflict resolution short of violence. Right now, we are on a dangerous course in our hemisphere — war drums are beating… it does not make rational sense.”

Indeed, the protest has gotten bigger already: Venezuelans in Caracas rallied in support of the Embassy Protection Collective on Wednesday, carrying signs with the names of several collective members and calling them “heroes.” Other messages of support from dozens of groups in Venezuela, from LGBTQ advocacy groups to cultural workers and even President Nicolas Maduro himself, have poured in in recent weeks.

Revolutionary forces are rallying in Caracas today in solidarity with the Embassy Protection Collective in Washington whose members been threatened with arrest by Trump’s police in clear violation of the Vienna Convention.

Here are some livetime pictures of the gathering! pic.twitter.com/w8sNo95mDt

Also Wednesday, Venezuelan Ambassador to the United Nations Samuel Moncada brought the case of the Embassy Protection Collective and the situation in Washington, DC, to the UN in New York, to demand the US respect international law and stop trying to evict the collective as well as cease facilitating the siege of the embassy by opposition forces.