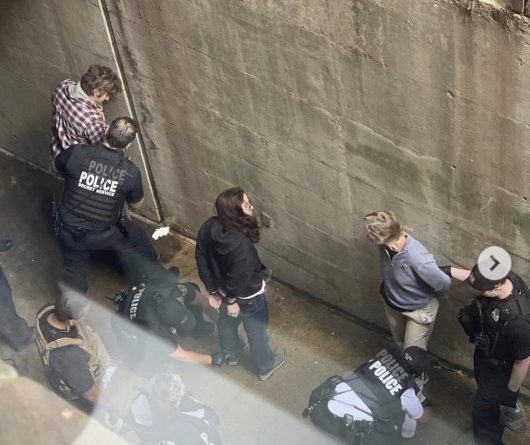 Earlier today the US Secret Service consumated one of the most aberrant and unlawful actions in US imperialist history. The long requested eviction (by Guaido’s “ambassador” Carlos Vecchio) of the remaining four peace activists that were guests of the only Venezuelan government recognized by the United Nations.

Alina Duarte, Telesur reporter/producer who was assaulted by Guaido supporters, received death threats, stalked to her home, was still there reporting this morning. She reports the charge against the Embassy Protectors is “interfering with protective measures”. Orwell rolls in his grave.

The Deputy Foreign Minister of Venezuela objected to this violation of diplomatic norms and the Vienna Convention in a public statement.

“We denounce the arrest of the people inside our DC Venezuela Embassy and consider it a violation of the Vienna Conventions” says Deputy Foreign Minister Carlos Ron. #EmbassyProtectionCollective

The Collective’s attorney, Mara Heydon Hillard spoke to reporters at the scene.

Earlier in the week, movements in Venezuela expressed their solidarity with the Collective protecting the Bolivarian embassy.

“You are our heroes and heroines! United we’ll overcome!”

Yesterday, Ambassador Samuel Moncada and Collective leader Tighe Barry gave this press conference on the status of the Embassy.

RELATED CONTENT: Tulsi Gabbard Speaks Out For Embassy Protectors and For “Hands Off Venezuela”

Medea Benjamin of internationally recognized Code Pink sums up the charges against the peace activists, quoting the Collective’s attorney.

The 4 peace activists at the Venezuela Embassy are charged with ‘interference with certain protective functions.’ They were not charged with trespassing because the US govt does not want to explain who is lawfully in charge of these premises: Attorney Mara Verheyden Hilliard.
— Medea Benjamin (@medeabenjamin) May 16, 2019

Code Pink calls for an action in solidarity with the Collective.

Though the four remaining embassy protectors were arrested today, the fight for the Venezuelan embassy and to defend international law continues. Come tonight from 6 to 8 PM in solidarity with the #EmbassyProtectionCollective and the Venezuelan people resisting US imperialism!