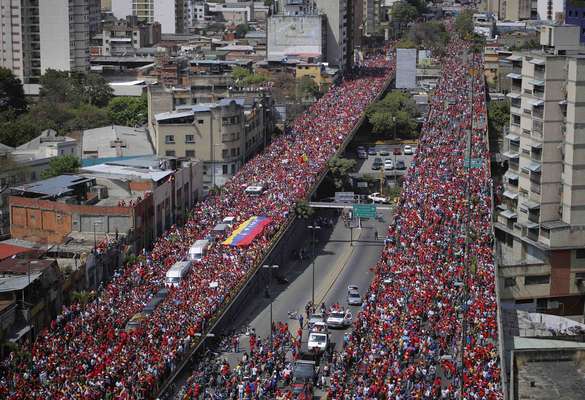 To speak about Commander Chavez is very easy, because Chavez himself was a transparent reflection of the soul of most ordinary Venezuelans: anti-imperialists, rebellious, proud, cooperative and Bolivarian. But to talk about Chavez is also difficult because of the way he was taken from us, with a lot of things still in the making. On the other hand, he left us with a political unity that even Simón Bolívar might have envied.

This year that we are marching through has a lot of significance for Chavistas, because Commander Chavez used it multiple times to mark it as his possible retirement year. During his last years of life, he used the term “hasta el 2000 siempre,” that might translate as, “until 2000 forever,” just to drive the right wingers crazy.

And for many Chavistas, this year 2021 marks the defeat of the “regime change” operation imposed by Washington against Venezuela and the country’s over 30 million inhabitants. Yes, with the leadership of President Maduro, we have been capable of overcoming one of the most brutal attacks carried out by the most powerful empire humanity has known. We can call these last two years in Venezuela, two years of resistance to the US war against our nation, not a conventional war but a hybrid war, in which they have tried all the tricks in their psyops and cointel manuals without success.

The only success they—the imperialists and their Latin American lackeys—can mark up is the appropriation of more that $40 billion in Venezuelan assets abroad, and frozen gold in the UK and bank accounts in the US, Europe and Japan. We also have to add the over $100 billion of lost revenue only in 2020, according to the latest figures presented by President Maduro in his address to the nation.

So here we are, the Chavistas, extenuated and heavily affected in our daily lives, but also proud of our resistance and our resolve to overcome all odds and translate them into opportunities to build a better country free from US domination, not only politically, but economically and technologically.

Many of our achievements can be credited to Hugh Chavez. Why? For multiple reasons:

•  Chavez taught us to regain pride in ourselves by looking deeply into our history. He taught us to see clearly that a tiny Venezuelan elite was in control of the country and that to initiate the reconstruction of the State, it was necessary to write a new Constitution and to regain confidence in ourselves.

•  Chavez constructed a Civic-Military union in the same spirit of China’s Mao Zedong, and with that, he built our powerful Bolivarian Militia. His Plan Bolivar 2000 initiated in 1999 was the seed he took from Mao’s teachings. Venezuelan military officers were very humble in their origins even before Chavez and that might explain the Chavez phenomenon. Yet it was—as in most countries—a system of casteist hierarchy that the European and the US doctrines spread all over the world in order to use the army whenever it was needed to repress the people. Chavez dismantled that elitist or casteist understanding of what it means to be an Army, and starting with this doctrine he began the construction of the Bolivarian Militia that currently has more than four million members. It is a integral part of the Bolivarian National Armed Forces (FANB), and it was this Militia that led the charge of defeating the mercenary incursion in Chuao Bay on May 2020, where a bunch of terrorists (including two former US marines) tried to disembark in Venezuela to abduct/assassinate President Maduro.

•  Chavez advocated and actively promoted a multilateral world order instead of a unipolar or bipolar order. In that sense, since his first day in office he strengthened strategic diplomatic, political and economic relations with other relevant countries in today’s world, including China, India, Russia, Iran, South Africa, Turkey, among others, but prioritizing also the Caribbean nations.

•  Chavez was a Latinamericanist and strong believer of Bolivar’s ideas of a united Latin America from Mexico to Argentina, including the Caribbean. In the building of that unity, Chavez was a founder of UNASUR, ALBA-TCP, CELAC, among other integrated regional cooperation bodies, aiming to build a strong Latin America free from the tutelage of the US, Canada and Europe.

•  Commander Chavez also taught us to realize that we are the main agents of our destiny, but that we need to achieve our goals within our communities, and for that the cooperative movement was heavily strengthened. From there, we moved to communal councils, then empresas de produccion social (social-economy enterprises) and then communes. Interconnecting community building with production networks that aims at dismantling the old state structure and eventually building a communal state, the dream goal for many Chavistas.

Chavez was wise enough to anticipate his passing, disregarding all the media warfare portraying him as a dictator wanting to perpetuate himself in power. We say that, because he built the PSUV party and aimed at having a source of cadres, a united Chavista leadership that even today shows admirable strength despite all the internal and external attacks, and even in his last message to the nation—anticipating all the battles to come—he demanded from us “unidad, lucha, batalla y victoria” (unity, struggle and victory) as the right formula to counter all the aggressions to come.

We, the real Chavistas, miss him very often but we know that the responsibility to build a better future for our children and grandchildren is ours… and we are giving everything in that fight and we’re prevailing!!!!

Note: Most of this article was written in the occasion of the launching of the book “Farmers ‘ Rights and Global Independence” in Bengali by Dr. M Jahangir Khan, on the occasion of 8th Anniversary of the Demise of Beloved Hugo Chavez and in solidarity with the Cuban Revolution, organized by the Tricontinental Solidarity Campaign for Venezuela.

Featured image: Tens of thousand Venezuelans took to the street immediately after the announcement of his passing to accompany him from the hospital to the Venezuelan Military Academy. Nothing was organized for the occasion, just the tears and grief of thousands of Chavistas that loved him. File photo.