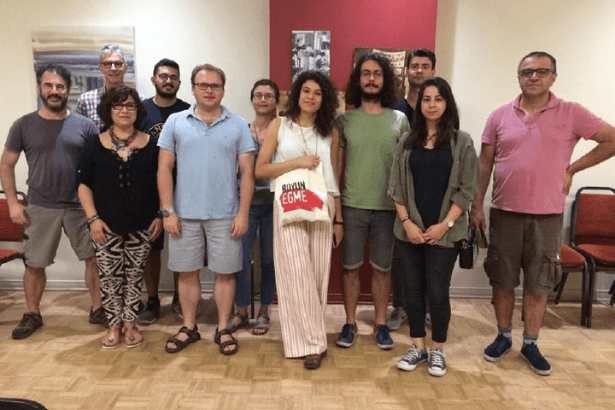 In a meeting that took place at the Greek Workers’ Association, immigrant people from Turkey living in Montreal, representatives of the Communist Party of Canada, the Quebec Movement for Peace and the Greek Workers’ Association met to discuss the actions to be held against the destruction in the Kaz Mountains, resulting in releasing a press statement on 16th of August.

Pointing out in an earlier statement that the mining operations across the world carried out by Canadian capitalists, the plundering of the natural resources belonging to the society and the destruction of the environment, the Communist Party of Canada underlined that how the Canadian model, the myth of so-called “environmentalist” and “human-friendly” Canada, had deepened the exploitation mechanism over the years.

PROTESTS WILL TAKE PLACE ON AUGUST 16

In a meeting that took place at the Greek Workers’ Association and was organized by immigrant people from Turkey living in Montreal, representatives of the Communist Party of Canada, the Quebec Movement for Peace and the Greek Workers’ Association, people against the destruction discussed the actions to be held. The people and organizations attending the meeting decided to release a public press statement on the 16th of August.

It is decided unanimously that with the rallies which will take place simultaneously in 3 different cities of Canada (Montreal, Toronto, and Vancouver), the collaboration between Turkey’s ruling party AKP and the Canadian mining company will be protested. With these protests, the committee also aims to show their solidarity with the people who are resisting in Turkey’s Çanakkale against all the devastation.

Underlining the transfer of the national resources to the monopolies and the crucial damage to the environment done by Canadian monopolies in Latin America, Eastern Europe, and Turkey, the meeting also decided to have an informative panel on the matter for the following weeks.