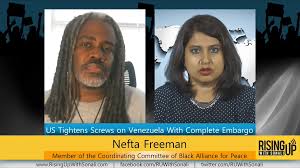 GUEST: Netfa Freeman, Member of the Coordinating Committee of Black Alliance for Peace, Institute for Policy Studies, an organizer at the International Committee for Peace, Justice and Dignity who has worked in the U.S. Cuba solidarity movement for years and just returned from Venezuela as part of the “Embassy Protection Delegation”

RELATED CONTENT: The New York Times: The blockade will fail in Venezuela

BACKGROUND: The US has expanded its sanctions against the Venezuelan Administration of Nicolás Maduro into a complete economic embargo. The move is intended to pressure Maduro as well as nations like China and Russia that have supported his government.

According to the Wall Street Journal, “President Trump late Monday signed an executive order freezing all government assets and prohibiting transactions with it, unless specifically exempted, the first action of its kind against a government in the Western Hemisphere in more than 30 years.”