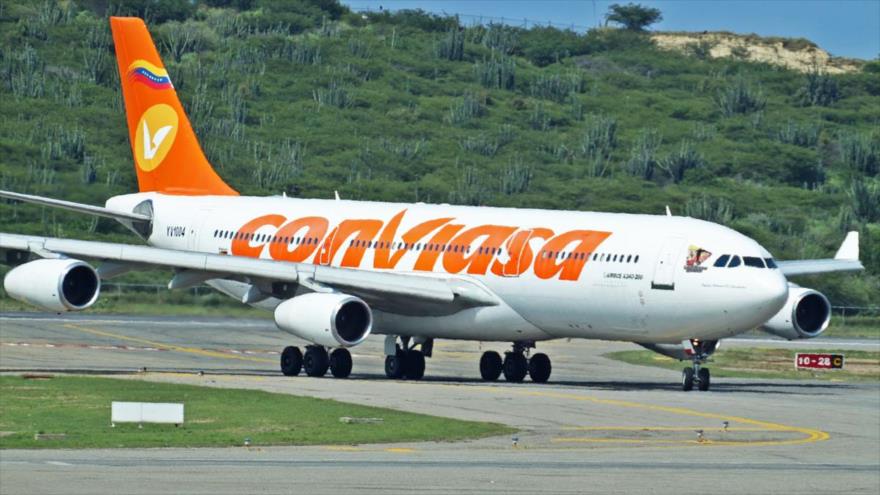 An Airbus 300 belonging to the Venezuelan airline Conviasa. Photo: HispanTV.

Venezuela’s national airline is ready to start direct flights between Caracas and Tehran in March 2022. The flights will benefit tourists, commerce, and industry.

Ramón Velázquez, Venezuelan vice minister for air transport and president of the Venezuelan national airline, Conviasa, announced direct flights between Tehran, Iran, and Venezuela’s capital. The announcement occurs in the midst of the COVID-19 pandemic, which remains relatively controlled in both countries, due to the approach of each country’s government.

In an exclusive interview for HispanTV, Velázquez said that “joining Tehran with Caracas is a strategic destination, and here tourism is going to be of great importance, above all, because we are going to have long-range planes that, on direct flights, can take passengers from Tehran to Caracas, and return from Caracas to Tehran.” These flights would avoid the current complications implied by stopovers or international connections.

The president of Conviasa provided details of the plan that would see 50 Iranian tour operators travelling to Venezuela on March 2 to inform themselves about the tourist attractions of the Latin American country and carry out the relevant negotiations with the tourism authorities. This will constitute the first step towards initiating commercial flights that will strengthen cultural exchange between both peoples, said Velázquez.

The Venezuelan vice minister for air transport explained that Iranian tourists will be able to visit Venezuela as of March 21, the day that marks the beginning of the Persian country’s New Year. The flight lasts nearly 13 hours, added Velázquez, and would be scheduled in order to take off in the evening hours, after dinner, so that the flight reaches its destination at dawn.

Conviasa has been carrying out direct cargo flights between Caracas and Tehran since 2019, on which it transports medicines, products for industry, and technological items. According to Velázquez, these flights not only benefit the commercial exchange of various products, such as Venezuelan tropical fruits and Iranian nuts, but also strengthen relations in the tourist and cultural spheres, where the true unity and strength of the peoples of Venezuela and Iran is founded.

“Where in the world is an airline penalized for transporting its country’s officials?” asked Velázquez. “Nowhere in the world, and apart from this the US sanctions against the Conviasa airline are extraterritorial and illegal, seeking to stop the union of peoples.” He recalled that the presidential decree, issued by the administration of disgraced US President Trump, also specifies that the sanctions apply in the case that the airline flies to the US, and Conviasa does not intend to fly to the US, nor establish any partnerships with any US airlines.

The Venezuelan deputy minister maintained that Conviasa is a legally constituted airline, registered with a basic code, with an IATA (International Air Transport Association) code, with all the appropriate permits and certifications, and therefore has the right to fly to any destinations it wishes.

Velázquez said that, although the pandemic slowed down Conviasa growth a bit, connections are already starting up again. The Venezuelan state airline has direct flights with Russia, (Caracas-Moscow), and is planning to land this year in Nigeria, Qatar, China, and Iran. These are strategic destinations for Venezuela, he added.

In addition, Conviasa is currently flying commercial and cargo flights to 13 destinations in Latin America including Ecuador, Chile, Argentina, Peru, Nicaragua, Cuba, Mexico, and Dominican Republic. Its plan for 2022 is to expand to 23 international destinations, and eventually to 58 once the detrimental effects of the pandemic wane.

As the Venezuelan deputy minister of air transport pointed out, Conviasa advantage is that it has strategic long-range planes, regional planes, and short-range planes, and can move tourists from destinations as far away as Iran, or between Venezuela and closer locations such as Nicaragua and Cuba.

Velázquez highlighted that in 2020, Conviasa made a familiarization trip to Tehran, bringing 43 Venezuelan tour operators to learn about the historical, natural, and cultural attractions of Iran, within the framework of promoting tourism between both nations. “We learned about the potential of tourism to Tehran that, before the pandemic, brought more than nine million tourists to the Middle East,” said Velázquez. “And it is there where one can properly say that what they sell to the world… about Tehran is a lie, because, rather, it is a safe country, with a high tourist potential for many visits, with a lot of development, which is what we are learning since we have been coming to Tehran.”

Iran is an example for Venezuela to follow for everything it has accomplished in 43 years since its revolution, said Velázquez, as well as an example for countries that have been sanctioned. Iran has shown how a country, regardless of its size or the power of the coercive economic measures applied to it, can develop, and grow. Iran has shown the world that this can be done when there is desire and will.

Finally, Velázquez expressed his hope that, alongside Conviasa, Iranian airlines can also establish this air bridge, and that flights to Caracas and Tehran will be more dynamic.

Many tourist experts hope that opening Tehran as a hub for Asian and Middle-Eastern flights to South America and the Caribbean through Venezuela and vice versa, bypassing the vaccine apartheid being imposed in Europe, United States, and Canada, could constitute a great opportunity to make this route commercially viable.