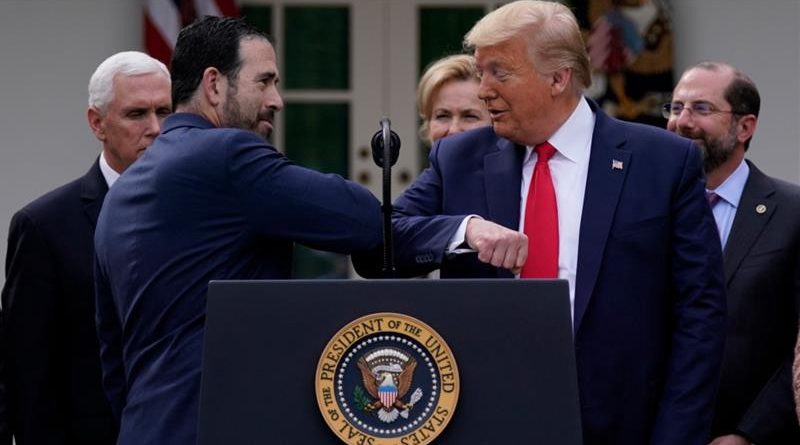 The advancement of the coronavirus, with exponential growth in new infections and deaths, is facilitating an inflection in world politics and economy in ways that had not been suspected at the beginning of the year.

Figures from the World Health Organization (WHO) have ratified its claim that the epicenter of the crisis has shifted to Europe.

The pandemic has been a factor strongly linked to the shaking of international markets, which have suffered strong ups and downs due to a factor of uncertainty about the fate of the world economy for the coming weeks and months.

Although the reasons for the fall in the markets are known, they are not explained exclusively by the health crisis. The financial system is showing clear signs of a rearrangement and also of a large-scale speculative move, in which in the face of a devaluation (induced by the crisis) of shares, goods and services, there is also a “change of hands” of many assets, in taking advantage of low prices.

This move of “opportunity” that is taking place right now lies in the possibility that, in the face of signs of China’s recovery, the effect could be unleashed in the same way in Europe and the United States, in the medium term, firing the indicators upwards, despite the fact that today the depth of the coronavirus on the western economies is unpredictable.

Similarly, a phenomenon is occurring in international politics. That is to say, there is a group of countries that are instrumentalizing “opportunity plays”, triggered at the expense of the health crisis, which, it must be said, is not exclusively a health one: it is also a political crisis and an economic breaking point.

It is also a communicational event that implies the manufacture of public opinion on a large scale. Also: it is an act of applying social engineering measures, of social control, in unison with sanitary control measures.

Several countries have begun to act on exceptional measures for the containment of the coronavirus, supported by a great international commotion that has spread through the media and politically. However, acts of exceptionality are signaling that several governments are trying to exploit the crisis, finding it an opportunity to apply other measures.

The most relevant cases by country, so far:

France. The French government has issued new containment measures for the coronavirus, however, this occurs at the moment when the Macron government executes a profound reform of the country’s pension system, that is considered by the vast majority as a national heritage, the product of intergenerational social struggles.

France also aims to quell the protests that have preceded recent reform announcements, especially those of the “yellow vests,” which have been on the French political scene for months as a stronghold of social outrage.

In this way, the French government is executing governance tailored to the crisis, mitigating social mobilization and sedating the collective rejection to the deeply controversial dismemberment of the French social safety net.

Germany. The country is facing the fragile framework of the European economies. Potential damage from the coronavirus to the industrialized German economy has already been quantified, by slowing down manufacturing activity, the drop in demand for goods and services and, consequently, the drop in many economic activities as a whole.

Germany is now lending itself to imitate the large-scale epidemiological encirclement measures that other countries have applied, but for this, instead of shielding German society with public resources, they have decided to direct them to the hands of German industrialists, including offering them “unlimited liquidity” to contain the impacts that the confinement of a large part of the population for sanitary reasons will have on this sector.

The measure is still controversial. The country has not known financial aid of this type, such as those given to banks with the 2008 crisis.

United States. Donald Trump has decreed a national emergency, releasing 50 billion dollars and expanding the powers of the US government to face the ravages of the health crisis. The president ordered the increase of strategic oil reserves “to the limit”, validating the thesis of “opportunity” that is causing the collapse of the stock exchanges.

However, Trump is instrumentalizing the crisis in an essentially political way to consolidate his leadership in the middle of the electoral campaign, something unusual in American politics, facing questionble handling of the crisis, for several reasons.

First, the true extent of the coronavirus advance in the United States is unknown. Second, the impact this will have on the US economy, epicenter of the economic facet of the crisis. Third, Trump’s own dismissals of the virus.

However, since last Thursday, March 12, Trump seems to have taken a turn and has now centralized the electoral campaign in the health crisis, at the expense of his political “showcases”, such as the agreement for the withdrawal of troops in Afghanistan, the Venezuela case, and even its economic management, are going by the wayside.

United Kingdom. Prime Minister Boris Johnson has decided to go in the opposite direction that has been taken in Europe in handling the crisis. The British government has been criticized for not taking more far-reaching measures like those seen in many other countries and, instead, the Johnson has been concerned to announce that “many loved ones will be lost”, but that the economy won’t stop.

Basically, the United Kingdom has decided to sacrifice human lives in order not to stop the remodeling they are doing to their economy, with a view on leaving the European Union in about 10 months.

Without definitive agreements reached with Brussels on different matters, Johnson has tried to manufacture the consent of public opinion, rejecting the virus and, at the same time, accelerating all financial preferences for the economic sectors for the coming months.

El Salador. The President of El Salvador, Nayib Bukele, asked this Friday, March 13, the Congress of his country to decree a state of emergency throughout the country, which implies the suspension of some constitutional guarantees, as part of the measures that seek to shield the small Central American nation from the coronavirus. El Salvador is one of the few countries on the continent that has not reported positive cases of the virus. However, this week the president asked the local immigration authority to prohibit non-resident foreigners from entering the nation, unless they are diplomats, to prevent the arrival of the coronavirus.

Bukele intends to acquire exceptional presidential powers, taking advantage of the crisis to consolidate his controversial internal security policy and the discretionary management of resources for such purposes. Recall that in the midst of a fight for resources with the Salvadoran Congress, the president recently harassed it by militarizing the parliamentary compound, thus declaring his proto-dictatorship.

Ecuador. When the recent “Black Monday” occurred on March 9 with the fall in the price of crude oil and the markets, Lenín Moreno decided to justify the acceleration of deep economic readjustment measures, “improving” the conditions of bilateral debt with the Monetary Fund International (IMF) and applying a drastic budget cut.

Moreno announced that he will make an additional cut of the budget of 1.4 billion dollars, will also eliminate and merge public entities. Additionally, the government manages loans with two international financing institutions for more than 2 billion dollars on better financial terms, without giving more details.

Basically, Moreno intends to pay an already painful debt, with new debt that he plans to acquire. These announcements had been unthinkable during the 2019 political crisis, which is evident today, that Moreno has managed in his favor, now applying much more drastic measures, without a greater reaction in Ecuador. The population is in fact confined to their homes.

The “shock doctrine”, which supposes that in the face of the shudder of a political and social entity, it can become “malleable” or “manageable”, seems to be an increasing trend in several countries and surely this will keep pace with the advance of the coronavirus, which could yield by June in the countries where it is ravaging today.

However, this appears to be a politically longer phenomenon. The year 2020 is a year in which global politics seems to be shaping up the consolidation of a state of exception, where aggressive forms of governance are being defined and unleashed, concentration of public opinion on the virus and an action to reshape the social response against government measures in the world.

The political, economic, and communicational interval that the new coronavirus is generating is a space for detente and a multipurpose opportunity for neoliberal governments.