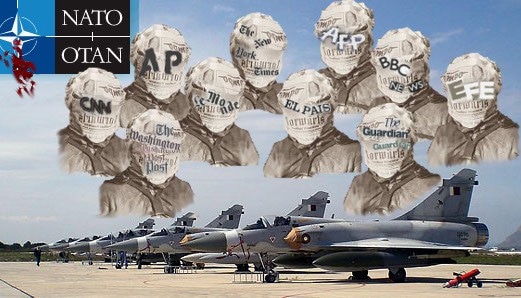 The most fundamental Western false belief, reproduced on a global industrial scale, is that North America and Europe are culturally and morally superior to the rest of the world. Anyone actively defending victims of US and allied aggression, from Palestine and Iran to Cuba and Venezuela, will be familiar with the disturbing symptoms of that superiority complex. Its insane prejudice permeates practically all North American and European information and news media. Its false premises render hopelessly flawed practically any report addressing international affairs emanating from Western governmental, non-governmental and multilateral institutions of all kinds.

Over the last twenty years the progressive decline of North American and European power and influence in the world has accelerated the original false beliefs to unprecedented levels of irrationality. Most recently, the kinds of demented behavior deployed by Western political and economic leaders and their media servants promote:

RELATED CONTENT: Nicaragua and the Struggle Against US Imperialism in Latin America – an Interview with Daniel Kovalik

In Nicaragua’s case, the supporters of those who promoted the failed 2018 coup attempt against Nicaragua’s Sandinista government continue to present violent Nicaraguan opposition actions as ‘peaceful protests’. They attribute practically all the deaths during the 2018 crisis to the police or to Sandinista supporters. While evidence for some of the serious incidents that occurred is confused, opposition activists were very clearly responsible for a great many very serious crimes.

They and their supporters carefully avoid addressing that fact, assisted by the complicity of practically all Western news and information media. Instead, Nicaragua’s opposition and their supporters evade taking responsibility for their atrocities, relying on the now standard demented behavior applied to cover up crimes by Western proxies elsewhere around the world. A brief review of incidents that took place in Nicaragua during April-July 2018, shows indisputable witness testimony confirming that Nicaragua’s opposition committed criminal atrocities. As often as not, this witness testimony is frequently confirmed by self-incriminating videos published by opposition activists themselves on social media.

Opposition supporters never address this reality because they are incapable of engaging rational criticism based on generally accepted rules of evidence. If they accept, as they should, that crimes of murder, kidnapping and torture were indeed committed by opposition activists, then their depiction of the 2018 opposition protests as peaceful falls apart. They have the additional dilemma of looking bad if they fail to condemn the heinous crimes committed by opposition activists. A corollary to that dilemma is that acknowledging those crimes renders untenable the claim that the perpetrators arrested for them were ‘political prisoners’.

Here are ten incidents in which the involvement of Nicaragua’s opposition in violent crimes is practically irrefutable.

Many other similarly egregious opposition atrocities and crimes were detailed in the independent report Dismissing the Truth, published in October 2018.

A broader deconstruction of opposition falsehoods and misrepresentations is available in the comprehensive analysis of the Nicaraguan opposition’s failed coup attempt, “Live from Nicaragua: Insurrection or coup?”.

Genuinely independent news and information media or non governmental organizations would address these crimes and acknowledge, firstly, the responsibility of Nicaragua’s opposition for committing them and, secondly, their own complicity in covering them up. But the demented irrationality currently dominating public debate in North America and Europe makes that outcome extremely unlikely.