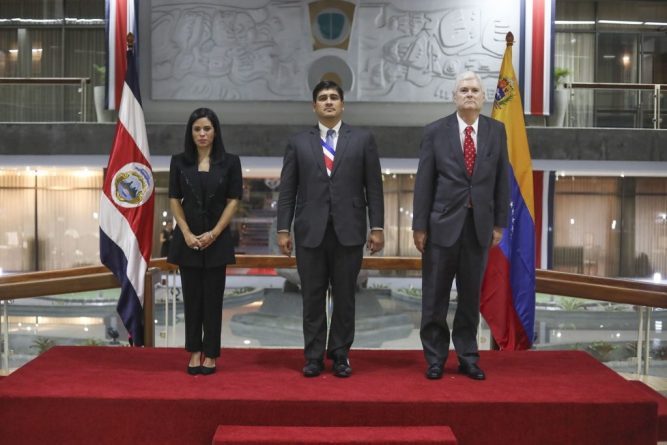 The president of Costa Rica, Carlos Alvarado, confirmed that his government asked the diplomatic representative of Venezuela to leave the national territory in the next hours, after recognizing self-proclaimed deputy Juan Guaidó as “interim president” of Venezuela.

Alvarado deferred to the Venezuelan Foreign Ministry for more details on the Executive’s decision.

On the other hand, the Yellow House in Venezuela (Ministry of Foreign Affairs) has not yet detailed the deadline granted for Nabil Mora, counselor; Angélica Ramírez, second secretary and Nelly Gliset, appointed in Costa Rica by Nicolás Maduro, to leave that country.

The Costa Rican president received Maria Faría yesterday, designated by Juan Guaidó as diplomatic representative of Venezuela in Costa Rica and who delivered his credentials in the Presidential House.

“She is the person who is recognized by the Government of Costa Rica. No other representative has official recognition, “said Alvarado.

The president reiterated that Costa Rica will not support any type of military intervention in Venezuela, “since its position is that of a peaceful and legal solution.”

“This situation resembled the same diplomatic aggression that affected Cuba in the 60’s and that only gave them strength to continue and radicalize their revolution”, said an expert in international relations consulted by OT.