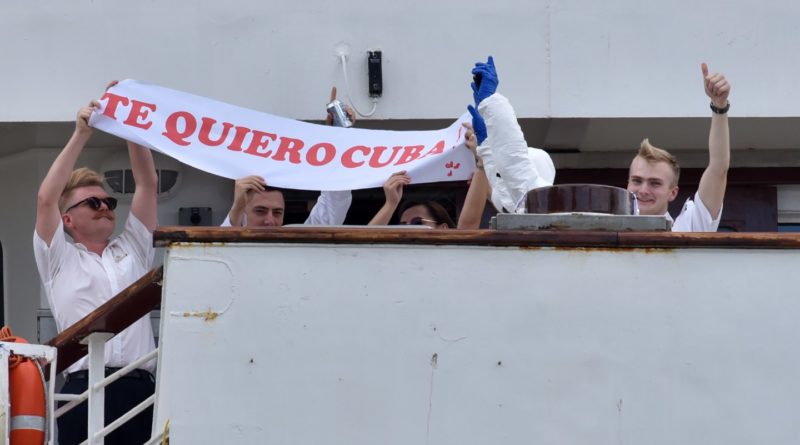 The most frequent qualifier used to describe the global experience of the pandemic we are currently witnessing or affected by, is “crisis”. And I am reminded of political theorist Antonio Gramsci’s words: “The crisis consists precisely in the fact that the old is dying and the new cannot be born; in this interregnum a great variety of morbid symptoms appear.”

Is the coronavirus COVID-19 Gramsci’s “morbid” symptom? I don’t know. He may have been thinking of more political symptoms. If he were alive today he may have named the level of desperation of the US government towards countries resisting its hegemony like Venezuela, Cuba, China, Nicaragua, Russia,…and the list goes on… as a morbid symptom. The agony of the dying empire that lashes against anything that is healthy and living.

The Trump administration is surpassing the threshold of what is acceptable from anybody in distress when it put a $25 million bounty “for information leading to the arrest and/or conviction” of the president of Venezuela Nicolas Maduro and other top officials. Information or assassination? For the US State Department that is just semantics. Without doubt the US was behind the assassination attempt against Maduro planned in Colombia in August 2018 that took place in Caracas with drones carrying explosives.

After all, the list of political assassinations by the US is quite extensive. The last one, this year, was that of Gen Qassem Suleimani, the leader of Iran’s elite military Quds force. Let no one be tempted to cast judgement on the victims. Only the assassin should stand trial.

The fact that the targeted killing against Maduro was ordered by the US State Department a few days ago at the precise time of a serious global health problem with the COVID-19 pandemic can only be interpreted as a Gramscian morbid symptom of the US administration collective disturbed minds.

But the state of mind of the US regime managers is not what I would like to focus on.

If we take the etymological meaning of the word crisis, it comes from the Greek krisis meaning decision. That is, we are at a critical point where we are encouraged to look forward and make decisions. Those decisions may well be political and we hope that they will bury the old and lead to something “new” to be born.

In January 1959 something new arose in Cuba from the rebellion against the rotten US supported government that had condemned the majority of Cubans to poverty and ignorance. The new society that emerged has resisted a fierce blockade on its economy for the last 60 years, despite of which it has thrived and set the most valuable example to humanity: the value of solidarity.

It is quite striking that just few months into the new Cuban revolution Che Guevara stated in a speech on revolutionary medicine “[what] we have done is practicing charity, and what we have to practice today is solidarity.”

In my professional life I have worked with Cuban health professionals and I have observed the superb public health system that Cuba has in place. It is a fully publicly funded system with complete geographical coverage. The best indicator of the health achievement is Cuba’s infant mortality rate that stands at 3.7 per 1,000 live births (for the US is 5.6) according to the World Bank (2018). Its major success comes from a very proactive prevention approach to primary care.

A major part of the strength of the institutions is the predominant role of solidarity in Cuban society. This sense of social cohesion may in fact be one of the reasons why Cuba is dealing quite successfully with the COVID-19 pandemic with 80 confirmed case reported to date and no deaths. President Diaz-Canel recently stated, “Everyone of us depends on every one of us, and we all depend on each other.” Consequently, community leaders and health brigades have visited close to 643,000 families to ensure they have the support needed to confront the health emergency in the face of an increasing blockade by the Trump administration.

Solidarity in domestic affairs is matched by the Cuban program of medical cooperation at the global level. A description of this program states that it is based on the principle of international solidarity and started with its first medical brigade to Algeria in 1963. In a research paper this author uses the example of Cuba to illustrate the practice of solidarity in healthcare in the hope of a healthier future.

However, given that healthcare deals directly with human lives and that resources are scarce, hard questions need to be asked: What is the value of human life? What acceptable trade-off—if any—can we make for a human life? What sacrifices are we willing to make as a society to save the life of a child? These are more than philosophical questions. The decisions we make around those questions will determine the kind of society we envision to have. This author and a Cuban colleague have suggested that Cuba has shown strong political will to sustain human life in Cuba as well as in other countries with matching resources. There is no better time to show political will to sustain good population health than at time of crisis.

In the last few weeks there have been many reports of Cuban health professionals being deployed to several countries that have asked for assistance to tackle the COVID-19 pandemic that even the corporate media has not been able to hide. For example, the conservative National Post has recognised the valuable contributions made by “communist-run Cuba” together with China and Russia even in a NATO country like Italy.

Meanwhile, capitalist-run USA calls on governments not to receive Cuban doctors. The White House attacked the Cuban health professionals, who in half a century of history have carried out missions in over 150 countries in Africa, Latin America and the Caribbean, the Middle East and Asia, totalling more than 400,000 medical collaborators. That is irresponsible and contrary to human solidarity. What the international organization Médicins sans Frontières (MSF) is doing to alleviate the deadly burden of COVID-19 is commendable. What must de condemned is the fact that such a daunting task relies on charity through unpredictable donations.

In conclusion, at a time of crisis – such as the spread of a deadly pandemic – we need to drop preconceived notions that might in fact exacerbate the crisis and search for ideas and strategies in order to build a new paradigm. Examples abound if we are objective observers. Cuba is such a living example of what is possible in the most severe health situation ever experienced in recent history in such a global scale.

Solidarity as a human value – quite contrary to charity – is meant to act upon the social organization in order to change it for the benefit of the larger collective. The exercise of solidarity is directed at awareness of the condition and at social change or the redefinition of power relations.

International solidarity, as a synonym of cooperation, could also be considered a pillar of foreign relations in a broader scale. What would it be like to have foreign relations between countries based on solidarity instead of hostility? Cuba shows us that it is possible.