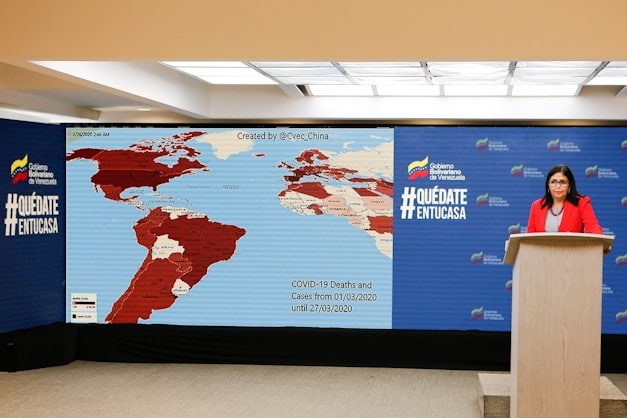 Venezuelan executive vice president, Delcy Rodríguez, announced this Saturday that in the last 24 hours a total of six positive cases of Covid-19 were identified in the country, bringing the total number of infections to 119.

From the Miraflores Palace in Caracas, she reiterated the concern that Venezuela is surrounded by countries whose contagion curve registers exponential growth such as Colombia and Brazil, while remarking that the US has become the epicenter of the pandemic, putting the entire region at risk.

Later in a phone interview on the TV show, La Hojilla, President Maduro added that currently there are 5 critical cases and 1 of them has been in that condition for 10 days. He said that 4 of them are in private hospitals and only one in a public hospital but all of them receive the same protocol and monitoring from the Ministry of Health following WHO protocols and treatments.

President Maduro highlighted the importance of being responsible referring to several cases where the now patients knew they where in dangerous countries but kept having social and working interactions after returning to Venezuela.

She described the six new cases:

The Executive Vice President announced a mass campaign on the offensive process against Covid-19 through the Extended Personal Screening using the first 500,000 rapid tests, which places the country as the first in Latin America in the per capita use of tests.
She reiterated the call to the Venezuelan population to stay at home in compliance with the social, collective, voluntary, conscious and radical quarantine through which the country maintains a flattened curve in cases of contagion.