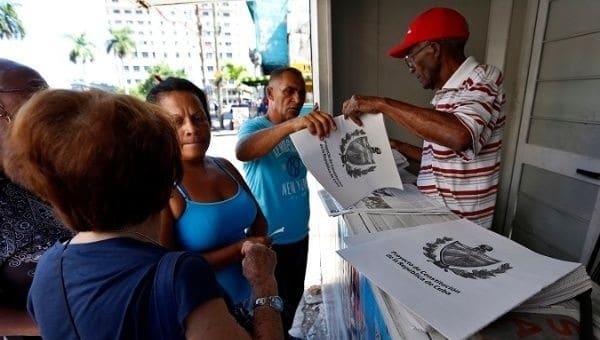 The National Assembly of the People’s Power (ANNP) will proclaim Wednesday the new Cuban Constitution during a session honoring the 1869 Constitution of Guaimaro, the first supreme law that the ‘Republic under Arms’ adopted while fighting against the Spanish crown.

“Neither Cuba nor history will ever forget that those who came first in war were also the first to demand respect for the law,” President Miguel Diaz-Canel said in reference to the Guaimaro Constitution and added that today “the past and the present embrace. We are Cuba.”

The new Constitutional text, which replaces the 1976 supreme law, was ratified by a popular referendum in which over 6.8 million Cubans exercised their right to vote on Feb. 24.

Seen as the basis for the country’s modernization, the new constitution changes the structure of the state, recognizes the importance of private property and foreign investment, strengthens popular power from the bottom up and extends collective and individual rights and guarantees.

“Cuba’s new Constitution will be proclaimed on April 10 during a solemn act at the Parliament. The date was chosen because this day marks the 150th anniversary of the first Constitution of the ‘Republic Under Arms’ which was struggling against Spanish colonialism.”

The ANPP Vice president Ana María Mari Machado informed that schools and universities will also celebrate patriotic acts. In Guaimaro city, there will be a special tribute to the heroes of independence who designed the first Cuban constitution nearly150 years ago.

The Council of State Secretary Homero Acosta presented Tuesday the Book of Constitutions, which includes constitutional texts, statutes and laws that ruled the island between 1812 and 2002. In its first edition, this book reproduces original legal texts in its two first volumes, which will be later completed with a third volume to review the elaboration of the new constitution.

The current Cuban constitution was made up through the participation of its citizens. Between Aug. and Nov. 2018, the draft legal text was reviewed by Cubans through assemblies in which about 9,600 proposals were submitted, analyzed and debated. Subsequently, in Dec. 2018, the ANPP reviewed and synthesized changes suggested by the Cuban people.