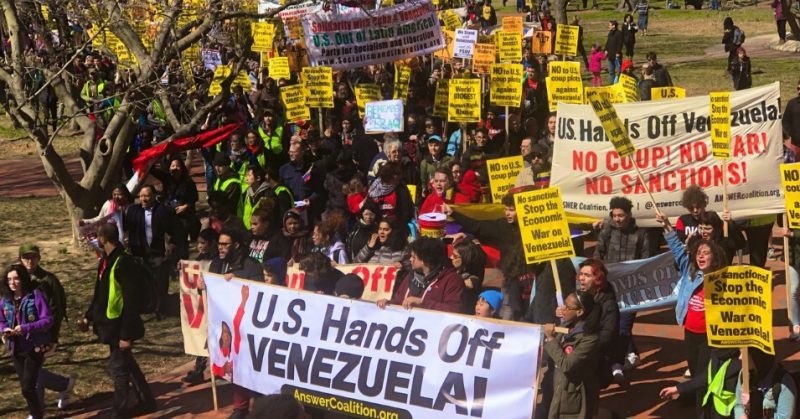 “There is nobody in that White House or in this administration that cares at all for the Venezuelan people.”

Denouncing the “strangling” of the Venezuelan economy via sanctions and demanding the Trump administration allow the South American country to determine its own fate, pro-democracy protesters marched through Washington, D.C. on Saturday to demand, “Hands Off Venezuela!”

U.S. sanctions on Venezuela’s state-owned oil company followed, on top of the $30 million per day earlier U.S. sanctions have cost the country.

Code Pink’s Medea Benjamin was among the prominent anti-war advocates who spoke at a rally on Capitol Hill before hundreds of protesters from all over the country began their march through the streets.

Benjamin rejected the administration’s claims that the “economic war” it has declared on Venezuela and the $20 million in so-called “humanitarian aid” it sent last month were gestures based in concern for the Venezuelan people.

.@medeabenjamin “We are absolutely opposed to economic sanctions in Venezuela” at the #HandsOffVenezuela rally. pic.twitter.com/onD127aWXa

The latest sanctions have been linked to the days-long blackout that recently affected much of Venezuela.

The corporate media’s complicity in promoting President Donald Trump’s agenda in Venezuela and its neglect of Americans who have spoken out forcefully against potential regime change there, was among the targets of the demonstration.

“.@CNN, @nytimes: the people of the world say no more lies!” #HandsOffVenezuela pic.twitter.com/zqcabaSsmd

Putting out this #HandsOffVenezuela footage just in case CNN or MSNBC skips it to show Michael Cohen walking out of a car for the 8547th time pic.twitter.com/WsA4JkTTd7

Brian Becker of the ANSWER Coalition also spoke, warning that the U.S. must end its efforts to decide for the Venezuelan people who their rightful leader should be.

“The U.S. government, whether it’s Trump or the equally imperialist Democrats, have no right, no capacity, no competence to tell the people of Venezuela who their president is or what their government should look like,” said Becker. “Only Venezuela can determine the destiny of Venezuela.”

National coordinator of the @answercoalition @BrianBeckerDC says “Only Venezuela can determine its destiny” at the #HandsOffVenezuela rally pic.twitter.com/cHnFXjfm36

Author and activist Eugene Puryear doubled down on rejecting the Trump administration’s claims that it’s concerned with the well-being of the Venezuelans, noting that numerous humanitarian crises are taking place in the U.S. every day.

“All over downtown Washington, any day of the week, there are people eating out of garbage cans, begging for change, doing whatever they can just to survive,” he told the crowd. “So when they say they care about humanitarian aid, where’s the humanitarian aid for the thousands of homeless people in the D.C. region? … They say money is more important than people and they want you to think that they’re in Venezuela for some sort of humanitarian reason. It’s a complete and total lie.”

Listen to @EugenePuryear explain to the DC streets why we can’t believe the Trump Administration when it claims to be acting out of concern for the people of Venezuela. No more war, no more lies! #HandsOffVenezuela pic.twitter.com/B7sLMTe2Tr

#USA #HandsOffVenezuela #LosPueblosConVenezuela Right now in Washington DC in front of the White House hundreds of people are congregated to denounce US imperialism and to show their support and solidarity with the Venezuelan people and their president Nicolás Maduro! pic.twitter.com/iWJuge3Qf6

As Americans spoke out in Washington, Guaido announced he was planning a national tour around Venezuela to mobilize his supporters before officially “reclaiming” power. Earlier this week, he indicated he may be open to calling for U.S. military action.

In Washington, some protesters carried signs with messages imploring the U.S. government not to go down the same path as the Bush administration in Iraq—and calling on Americans to speak out against U.S. meddling and potential military action in Venezuela.