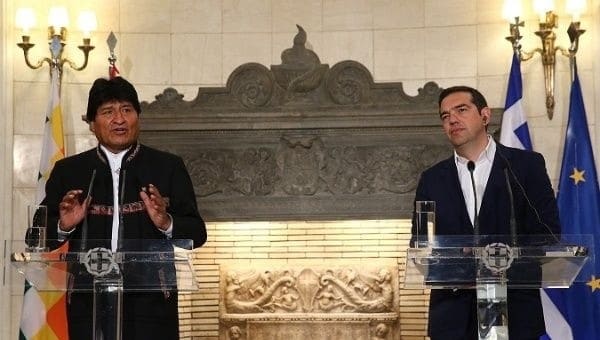 Bolivia’s President called on European and Latin American presidents to confront the far-right attacks against sovereign countries, while also stressing opposition to intervention in Venezuela.

At the Stavros Niarchos Cultural Center in Athens, Greece, the Bolivian President Evo Morales proposed Friday a forum for cooperation to fight against the far-right advance, an international initiative which is expected to reunite the European and Latin American progressive heads of state.

“Our thoughts will always be with the neediest and abandoned, along with the people who need their leaders the most,” Morales said and added that “social justice is the only way to end conflicts.”

The Greek Prime Minister Alexis Tsipras, who seeks to strengthen ties with the Andean country, supported Morales’s proposal of an international meeting of leftist leaders to be held in Bolivia.

“[Progressive leaders must] fight together, inspiring the popular masses with a perspective of solidarity in favor of democracy and peace,” Tsipras said and agreed to support the forum.

When referring to social justice policies, Tsipras reminded that Greece decided to increase the minimum wage, which previously suffered a 22 percent cut due to an International Monetary Fund’s austerity recommendation. Nevertheless, despite the neoliberal idea that claims salary increases reduce employment, Greece was able to carry out international financial operations.

Don’t believe US lies about #Venezuela. They’re drumming up fear to justify war. We feel as safe in Caracas as in any large city.

We went for a walk just now to show you things are normal. We saw some peaceful pro-Chavista rallies yesterday. Is this scary?#HandsOffVenezuela pic.twitter.com/U9qyMyU00H

“39,000 new jobs have been created… it is a neoliberal myth to sustain that rising wages hurts economic growth,” Tsipras said and announced that Greece will continue on its own policy path “because it is the only one that can give results.”

RELATED CONTENT: “No War for Oil” as Thousands March in DC Against US Intervention in Venezuela (Video)

On a related issue, both leaders rejected any military intervention in Venezuela and stressed that the situation must be resolved through dialogue.

“Reviewing the history, we see that where there have been interventions, such as in Libya or Iraq, there were no social, democratic solutions,” Morales said and emphasized that “the only solution is dialogue. Support it.”

Regarding the attempts to destabilize Venezuela’s President Nicolas Maduro government, the Greek prime minister said “the people must decide their future without foreign interference. No one should indicate the way from abroad.”