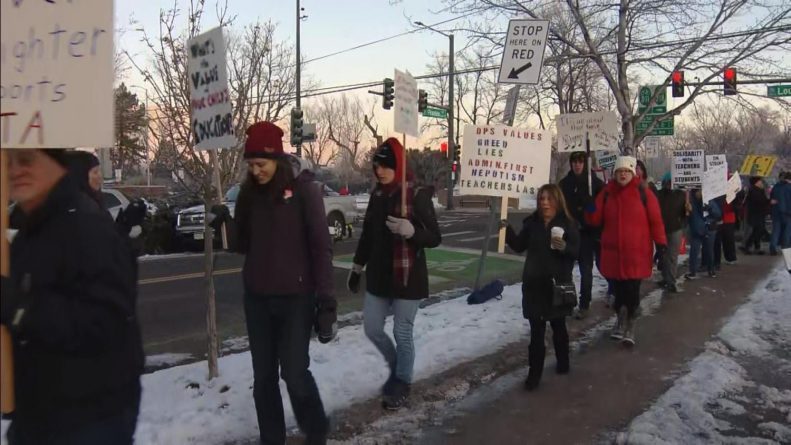 DENVER (CBS4) – For the first time in 25 years, Denver teachers are on strike. The move comes after failed negotiations with Denver Public Schools administrators over base pay. Teachers are picketing outside schools around the city as the district tries to keep schools open by staffing them with administrators and substitutes. “We’re hoping for a quick solution to this whole thing but unfortunately after 15 months of bargaining, the district (has) been unable to listen and they have been unwilling to listen. And so we’re hoping they come to table tomorrow ready to listen so we can get back to work, because our teachers want to be in their classrooms with their kids,” said Rob Gould, Denver Classroom Teachers Association spokesman. Teachers are planning to leave the picket lines to rally at the state Capitol at 2 p.m. on Monday.

According to Denver Public Schools, there are a total of 4,725 teachers in the district. More than 2,600 did not report to work on Monday. Additionally, district officials said bus ridership was down by half.

Denver Public Schools superintendent Susana Cordova talked about the status of the strike on Monday morning and said they area hoping for a positive outcome.

“We’ve certainly listened to the feedback that we’ve heard over time and made changes,” said Cordova. “I’m looking forward to being able to sit down and talk about everything. We’ve made significant progress.” The district canceled classes for about 5,000 pre-schoolers because it doesn’t have the staff to take care of them.

Members of the DCTA voted Jan. 22 to strike. The State of Colorado announced it would not intervene on Feb. 6. That cleared the way for teachers to begin striking Monday. The two sides disagree on pay increases and bonuses for teachers in high-poverty schools and other schools that the district considers a priority. Teachers want lower bonuses to free up money for better overall salaries. The district says the bonuses are key to boosting the academic performance of poor and minority students.

Both sides will come together at 10 a.m. Tuesday to continue negotiations.

Rep. Jason Crow, a Democrat who represents Colorado’s 6th Congressional District, joined the teachers on the picket lines on Monday. Outside South High School after the start of school on Monday morning some students left the school to join teachers outside. Cordova said that many students did walk out of class on Monday but that none of the schools were out of control or that students were left unsupervised. She said that at many schools, staff tried to keep classes and schedules similar to what a typical school day would look like but that at others, the school day would not resemble a normal schedule or routine for students. DCTA will operate community food banks to assist families affected by the strike. Non-perishable donations may be delivered and families may receive goods form 7 a.m. to noon at the following locations: