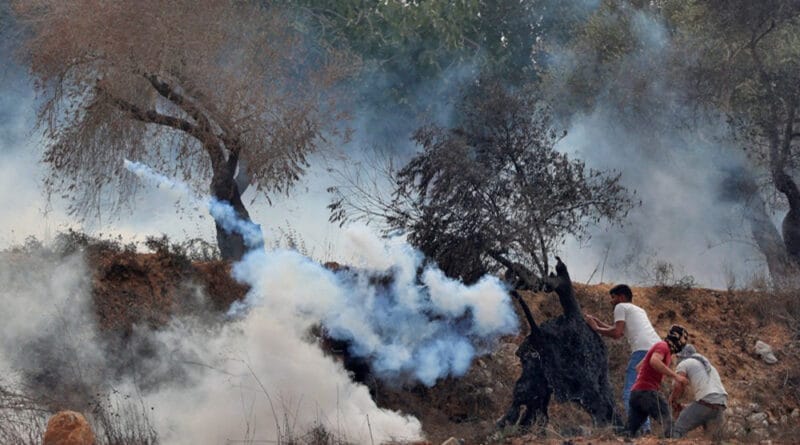 Tens of Palestinians were wounded as Israeli troops attacked several anti-settlement protests across the occupied West Bank on Friday.

Two Palestinians were hit by rubber bullets fired by the Israeli troops at a weekly anti-settlement rally in the flashpoint town of Beita, south of Nablus. The Palestine Red Crescent ambulance service said 26 others suffered breathing difficulties due to inhaling tear gas fired by the Israeli forces.

Since May, Beita has seen intensified clashes between Israeli forces and Palestinians protesting against a settlement outpost that has been recently established on Sobeih Mountain by settlers under the protection of Israeli forces.

Israeli forces also fired rubber bullets, sound bombs, and tear gas at participants in an anti-settlement protest in Kafr Qaddum, east of Qalqilya City. During the clashes, eight Palestinians were hit by rubber bullets, while scores of others suffered breathing difficulties from inhaling the toxic fumes.

Israeli troops also suppressed a protest against settlement expansion and settlers’ ongoing attacks on Palestinians and their properties in the Umm al-Shaqhan Village — which is threatened with Israeli seizure — south of al-Khalil (Hebron). The demonstrators stressed their determination to protect their land and to thwart Israel’s plots to expand settlements.

During the protest, a number of Palestinians and foreign activists as well as eight journalists were detained.

More than 600,000 Israelis live in over 230 settlements built since the 1967 Israeli occupation of the West Bank and East al-Quds.

All Israeli settlements are illegal under international law as they are built on occupied land. The United Nations Security Council has condemned Israel’s settlement activities in the occupied territories in several resolutions.

Israel killed nine children in two months: UNICEF
In a report issued on Wednesday, the United Nations Children’s Fund, UNICEF, said nine Palestinian children had been killed in the West Bank and East al-Quds by the Israeli forces in just two months.

“Tensions continue in the West Bank, including East Jerusalem [al-Quds]. Nine Palestinian children were killed between 7 May and 31 July, and 556 children were reported injured, including by live ammunition, rubber-coated bullets, concussion grenades, and tear gas,” the UNICEF report said.

RELATED CONTENT: The Murder of the ‘Menacing’ Water Technician: On the Shadow Wars in the West Bank

According to the report, at least 170 Palestinian children were detained in East al-Quds during the same period.

The UNICEF said 2.5 million people, including 1.2 million children, living in the besieged Gaza Strip and the West Bank, including East al-Quds, currently needed humanitarian assistance. It said the humanitarian situation had deteriorated recently with the rise of tensions in East al-Quds, the Israeli aggression on Gaza in May, and the ongoing COVID-19 pandemic.

Weeks of Israeli harassment of Palestinians in al-Quds and attempts to appropriate Palestinian lands in the Sheikh Jarrah neighborhood was followed by the Israeli bombardment of the besieged Gaza Strip in May this year. The Israeli aggression on Gaza killed over 250 Palestinians and wounded more than 1,900 others, before a ceasefire came into effect on May 21.

Featured image: Palestinian protesters throw back tear gas canisters fired by Israeli forces during clashes following a demonstration against the nearby Israeli settlement outpost of Eviatar, in the town of Beita, north of the occupied West Bank, on August 27, 2021. (Photo by AFP)