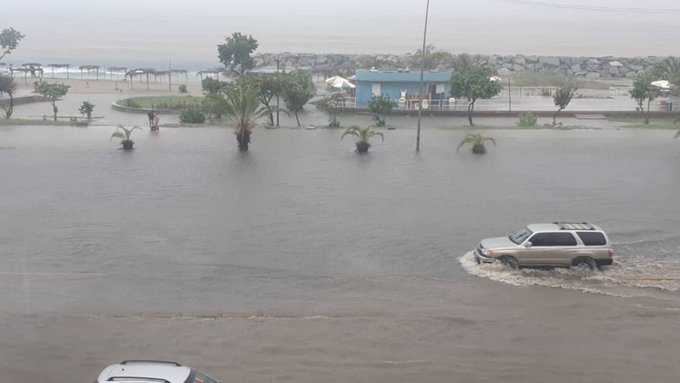 On Saturday, August 28, rivers and streams in the state of La Guaira overflowed after heavy rains, leading to flooding in many places, especially in the towns of Macuto, Camuri Grande and Naiguatá. Images of overflowing rivers and inundated roads circulated in social media throughout the day.

In videos posted by several Twitter accounts, it can be seen how water entered traffic routes and flooded outdoor places in Camuri Grande. In other videos and images, one could see water surrounding the Simón Bolívar University campus in Naiguatá and the entire university neighborhood.

The town of Macuto has also been greatly affected, with roads that have evidently turned dangerous for passersby, due to an increase in the water level in rivers and thick layers of mud dragged down by streams from the nearby mountains.

This area was catastrophically affected in December 1999 by the worst environmental calamity suffered by Venezuela, during what is called by Venezuelans El Desastre de Vargas (Vargas Tragedy), when it was estimated that almost 20 thousand Venezuelans lost their lives in unprecedented landslides caused by heavy rain that lashed the region for three days in a row.

During the first term of PSUV governor of La Guaira state, recently deceased Jorge García-Carneiro, a number of geological and infrastructure projects were developed to prevent events like the one that destroyed the region in 1999 from happening again. For this reason, in most of the videos posted on Saturday’s heavy rains and floods, one can see very wide canals that were build precisely to prevent major destructive and fatal incidents.

Regarding the heavy rains and resulting floods in La Guaira, extreme right anti-Chavistas complained about the flooding, but none of them recognized the incredible infrastructure work developed by the Bolivarian Revolution to prevent major catastrophes in the area—catastrophes driven by climate change. However, the majority of Venezuelans and especially residents of La Guaira praise the work that was done by former governor Jorge García-Carneiro, who has been called “the best governor of Venezuela” on multiple occasions.

During García-Carneiro’s governorship, many among the anti-Chavista sectors had complained about these incredibly wide canals that usually did not have water flow wider than one or two meters. However, after Saturday’s torrential downpour it was evident that the infrastructure was really an extremely well designed and necessary project.

Emergency response immediately deployed in La Guaira
President Maduro’s administration has deployed a fast comprehensive emergency response to attend to the people affected by the heavy rains and to repair roads and restore electricity, telecommunication and other services impacted by the rains.

On Saturday itself, in the afternoon, Venezuelan authorities and emergency relief agencies were deployed in La Guaira to restore electricity services and fix the roads affected by the torrential rains that are forecast to affect the area over the next 48 hours due to the passage of a low pressure trough.

Featured image: An SUV passing through a flooded road in La Guaira after heavy rains on Saturday, August 28. Photo: Twitter.