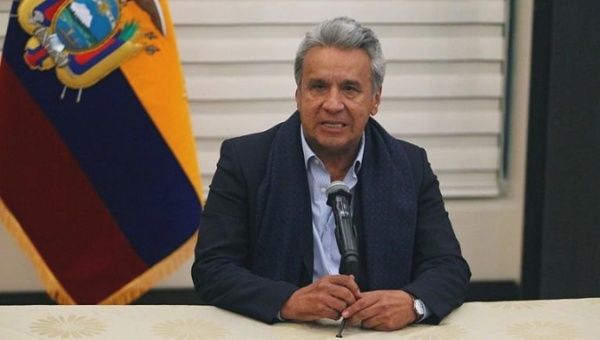 The Inspection Commission to carry out an analysis of the “INA Papers” accusations.

The Ecuadorean National Assembly passed Tuesday a resolution to initiate a corruption probe of President Lenin Moreno regarding the “INA Papers” accusations.

“With 74 votes, the National Assembly approved a resolution that requires the Inspection Commission to carry out an analysis of the publication dated Feb. 19, 2019, in a digital platform titled ‘The Offshore Labyrinth Of The Presidential Circle,'” an official statement said.

The Plenary of session 581 began with the inclusion in the agenda of a resolution proposed by the legislator of Revolucion Ciudanana (Citizen’s Revolution)- former President Rafael Correa’s party- Ronny Aleaga, requesting a multiparty commission to be created in order to investigate the INA Papers case. However, that resolution was not taken into consideration.

The case involves a publication made on Feb. 19 by “La Fuente” (The Source), a digital news outlet owned by Fernando Villavicencio, an outspoken critic of ex-president Rafael Correa. The investigation presented a presumed link between Moreno and the company INA Investment Corp, a Panama tax haven, from which a series of payments, gifts, and purchases of furniture, and even an apartment in Spain were bought for the family of President Moreno.

During Tuesday’s session, it was right-wing party CREO’s legislator, Homero Castanier’s draft resolution that got approved. This proposal tasked the Inspection Commission to do a full review of the formal accusations and submit a report to the plenary of the Assembly, in no more than 20 days. The Commission is preceded by lawmaker Maria Jose Carrion from Alianza Pais, the President’s political party, which raised questions from the Revolucion Ciudana block who voted against it.

RELATED CONTENT: Venezuela Celebrates Ecuador’s Withdrawal From Unasur: “We Can Not Have Traitors in our Ranks”

“The report we are going to make will be an analysis of this journalistic publication. It won’t be an investigation, as it’s not possible for the President to be summoned because the law is clear and for that to happen it must be within the framework of a political trial, which is not the case,” Carrion explained Wednesday.

However, Moreno will appear on court on April 1 regarding another legal process. On March 19 an Ecuadorean judge ruled on a hearing after a conversation was leaked between National Assembly President Elizabeth Cabezas and Interior Minister Maria Paula Romo, in which Cabezas pressured Romo to prevent the creation of an investigatory commission to probe corruption allegations against Moreno.

The defendants, including the President, all 137 National Assembly lawmakers, its president, Elizabeth Cabezas, Interior Minister Romo, among other officials will be compelled to appear on court.

Yet as both processes develop, Tuesday another legislator of Revolucion Ciudadana, Lira Villalva, publicly denounced political persecution as the National Assembly President, accused Aleaga of three crimes: violation of privacy, illegal association, and illegal data interception. All dealing with the aforementioned leaked audio.