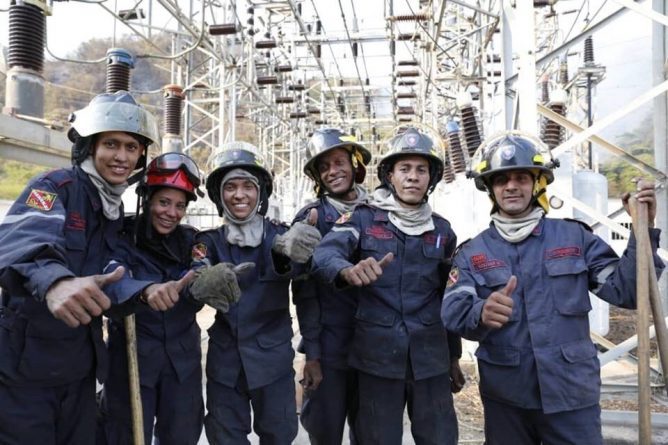 Since March 7th Venezuela has lived with a series of electric blackouts that according to officials from the Bolivarian Revolution have a source in the unconventional war already initiated by the US Administration in a very visible way led by Donald Trump, Mike Pompeo, John Bolton, Elliot Abrams and Marco Rubio.

March the 7th and the 25th are dates that are going to have an impact in the spirit and soul of the Venezuelan people in the years to come, but a positive one.

Disregarding what is signified by switching off the energy of a country COMPLETELY or almost completely, there was no major incident of riots, looting, military uprising or anything the corporate media have been selling around Venezuela in recent years as a country submerged in a “humanitarian crisis” or as a “failed state”.

Much the contrary, the electric sabotage has served as a evidence of the resistance of the Venezuelan people, of the values of peace and solidarity promoted for the last 20 years by the Bolivarian Revolution and of the control President Maduro has in keeping the country united and providing the services the population need to keep moving forward.

But most importantly this aggression translates into the faces of the thousands of Venezuelans that comprise what we have called the Electric Army. Women and Men that have barely slept in recent days in order to provide the conditions for the restoration of the electric service.

This Electric Army is made up of electric workers, firefighters, workers from the Ministery of Water and State and Local agencies in charge of distributing water, of course law enforcement agencies, and the organized communities within the Communal Councils, Communes and CLAPs.

To honor them we decided to post a few photos from the very few out there (we believe due to security concerns) but we consider it very important to show their faces because they deserve it.

We encourage you to share with us (facebook or twitter) any photo you might have of our Electric Army in order to update this piece and make it more relevant in the coming days.