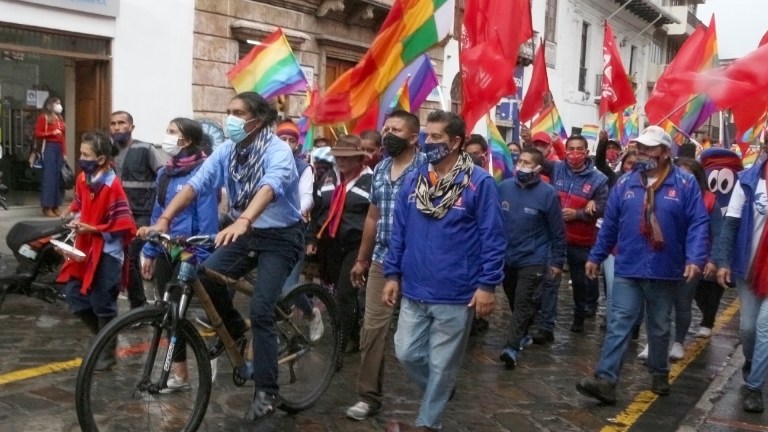 An Ecuadorian presidential candidate from a US-backed party, Yaku Pérez, has requested a military takeover and nullification of election results to prevent the popular socialist Correista movement from returning to power.

Ecuador’s third-place presidential candidate, Yaku Pérez Guartambel, has called for direct military intervention in his country’s political system, requesting a purge of electoral authorities and a nullification of the results of the February 7 election that he lost.

Pérez has also demanded that Ecuador’s corrupt and undemocratic Lenín Moreno government immediately issue a legal judgment against the socialist-oriented candidate Andrés Arauz, who won the first round of the presidential election in a landslide, in an effort to disqualify him based on a debunked conspiracy alleging he received money from Colombian socialist guerrillas in the ELN.

The Grayzone has documented how the Pachakutik party of Pérez has received support from the US government, and how the candidate has misleadingly portrayed himself as a progressive environmentalist while pushing for right-wing policies and US-backed coups targeting democratically elected left-wing governments across Latin America.

Given Pérez’s backing of military coups in neighboring countries, perhaps it comes as no surprise that the candidate has echoed a call for a military takeover of his own nation’s democracy.

In a post on his official Facebook page on March 9, Pérez endorsed an extremely controversial article that demands that the Ecuadorian military take over, that Arauz be tried, that all of the members of the National Electoral Council be replaced, and that the first round of the election be nullified.

A full translation of Pérez’s post follows at the bottom of this article.

In late February, a group of prominent academics signed a lie-filled open letter defending Yaku Pérez, outlandishly smearing this present journalist as a “racist and sexist,” and calling for The Grayzone’s factual reporting exposing Pérez to be censored. The Grayzone documented how several of the signatories, like Pérez, supported the US-backed far-right military coup against Bolivia’s democratically elected Indigenous socialist President Evo Morales in 2019.

The Grayzone contacted some of the most prominent signatories with a request for comment, inquiring if they still stand by the letter and support Pérez after his call for a military takeover of his country’s democracy.

Some of the signatories have responded by distancing themselves from Pérez.

The renowned critical theorist Judith Butler replied to The Grayzone writing, “Please know that I do not support the coup or the current ‘president.’ My concern was only to defend eco-feminism as I know it, the important work on indigenous cultures and languages. I have been dismayed to learn that my signing of that document translates into support for Yaku Perez. I do not support Yaku Perez and never have.”

If at first you don’t succeed, try, try again… to overturn the election results

Yaku Pérez’s intentions could not be any clearer: He wants to prevent Ecuador’s popular socialist and anti-imperialist Correista movement, led by former President Rafael Correa and represented by Arauz, from returning to power democratically.

Pérez said so clearly, writing in his Facebook post that “the soldiers from the Armed Forces should intervene in the polls to give clarity to the elections and thus avoid the return of Correismo.”

When journalist Marco Teruggi reported on Pérez’s request for military intervention in Ecuador’s democracy, warning that it represents “signs of desperation and a threat to democracy,” Pérez replied with another conspiracy theory.

According to Pérez, Rafael Correa and the right-wing politician Jaime Nebot “control the CNE,” or National Electoral Council. In reality, the electoral body is led by a member of Pérez’s own political party; CNE President Diana Atamaint is a former National Assembly member from Pérez’s Pachakutik.

What’s more, the CNE had been corrupted by the Lenín Moreno government and has shown extreme bias against the Correista movement. In the current election, it blocked Correa from participating as a vice presidential candidate, banned Arauz’s political party, and even forbade candidates from using images of Correa in their campaign ads.

Contrary to what Pérez claimed, the Moreno government purged the CNE of anyone sympathetic to Correismo and filled it entirely with opposition figures from anti-Correista parties, including Pérez’s Pachakutik, the right-wing CREO party of banker Guillermo Lasso, and the conservative Social Christian Party of Jaime Nebot.

RELATED CONTENT: Ecuador: from Horror and Grief to Electoral Debate and Corruption

Yet Pérez insisted in his tweet that, by calling for the military to take over the Ecuadorian election, “I am calling for strengthening democracy.”

Because he came in third place in the February 7 vote, Pérez will not go to the run-off on April 11. So he has resorted to a slew of undemocratic tactics to try to get the election that he lost reversed.

First, when the results were initially not clear, Pérez formed a short-lived friendship with the second-place candidate, the right-wing banker Lasso. The two worked with Ecuador’s National Electoral Council (CNE) to organize a recount of the vote.

But this anti-Correista alliance of convenience quickly fell apart when Lasso’s lead was officially confirmed and he dropped his request for a recount.

So then Pérez cried fraud, without presenting a shred of evidence. He subsequently convened a deeply suspicious private meeting on a street under cover of night with a briefcase-wielding judge from Ecuador’s Electoral Tribunal (TCE).

Now that his antics have failed, Pérez has desperately resorted to echoing a call for a military takeover.

The article that Yaku Pérez endorsed was written by Simón Espinosa Cordero, a former Catholic priest turned conservative media columnist. In the 2017 election, Espinosa openly supported right-wing candidate Guillermo Lasso, who is once again running in the current election.

Lasso, a wealthy banker, served as Ecuador’s first and only ever “Super Minister of the Economy” during a 1999 financial crash that destroyed the country’s economy, bankrupting millions. And he has himself been credibly accused of stealing huge sums of money and hiding it in offshore accounts.

Despite his open support for corrupt candidates, Espinosa Cordero is a member of Ecuador’s Anti-Corruption Commission, a highly politicized body that has been used by the current, deeply undemocratic government of President Lenín Moreno to pursue legal warfare, or lawfare, against former President Correa and followers of his leftist Citizens’ Revolution movement.

Moreno was also exposed for stealing millions of dollars worth of public money, in a leak known as the INA Papers. Moreno’s blatant corruption, neoliberal reforms, and authoritarian crackdown on all political opposition have earned him an 8 percent approval rating.

Espinosa Cordero’s article calling for a military takeover of Ecuador’s democracy set off a massive scandal inside the country. It was published by the major right-wing newspaper El Comercio, which has a feature on its websites that allows readers to rate its articles with an emotion. The nearly 5,000 replies reflect the mood inside Ecuador: 97 percent of the responses said they were “angry,” whereas just 2 percent were “happy.”

Pérez endorsing a conservative pundit’s call for a military takeover of Ecuadorian democracy is one of many examples that show his true political colors, exposing his claim to be a progressive environmentalist to be little more than cynical marketing.

Simón Espinoza, a member of the Anti-Corruption Commission, emphasizes that the soldiers from the Armed Forces should intervene in the polls to give clarity to the elections and thus avoid the return of Correismo, his article emphasizes the following.

Therefore, we suggest that the Armed Forces protect our rights to elect and be elected without tricks. It will thus fulfill its obligation to defend us without asking permission from anyone, given we are facing a grave case. It will be able to do this by means of a constitutional declaration that includes the following:

1.- That there is an immediate judicial judgement on the supposed funding that Mr. Arauz has received from criminals;
2.- That all of the members of the National Electoral Council be replaced by their alternates or substitutes, to not rupture the institutionality of the law;
3.- That nullifies the first round of the election and that the same candidates do it again under the direct intervention of national or international organizations that offer absolute certainty in the proceedings; or absent this, that the count is totally redone, under the same conditions of control, observation, and intervention by organizations that offer full guarantee of the process;
4.- The immediate intervention of the comptroller’s office in the information systems of the current electoral apparatus, as has already been requested;
5.- The immediate intervention of the attorney general’s office in the proceedings and facts that have caused social alarm, as has already been requested.