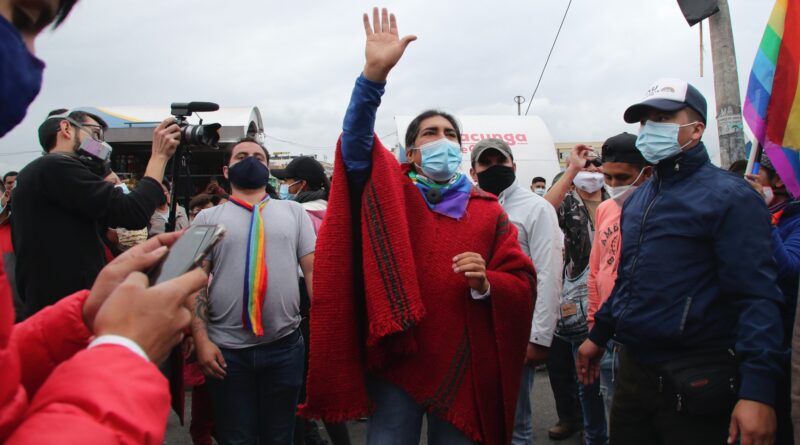 Over the weekend, the country’s electoral council announced the top two candidates who will be headed to a runoff on April 11. But there have been accusations of fraud by the third-placed candidate.

Andrés Arauz was the clear winner, with almost a third of the total votes. The 36-year-old is a former head of the Central Bank and a close ally of two-term President Rafael Correa, one of the key figures of Latin America’s leftist, so-called Pink Tide.

Arauz’s challenger is 65-year-old Guillermo Lasso, a conservative, former CEO of one of the country’s largest banks. He’s also a longtime Correa adversary and in his third run at the presidency.

The two will contest a runoff vote, a typical part of the election process in many Latin American countries, on April 11. But there have been accusations of fraud by the third-place candidate, who is leading a march into the capital, Quito, to demand a recount. Some other observers, though, worry about what they see as an effort to stall the election and ultimately, impede democracy at work.

Noam Chomsky, Jeremy Corbyn, and Adolfo Pérez Esquivel and other notable members of Progressive International, which tries to mobilize progressive activists around the globe, have signed on to a letter demanding that Ecuador respect the election results.

“The Office of the Prosecutor is escalating efforts to dismiss the first-round results,” the organization said in a statement that went on to say, “We are ringing the alarm: the government of Lenín Moreno is preparing a coup against democracy.”

It took two weeks to confirm the winners as a result of claims of fraud from the third-place challenger, Yaku Pérez, a member of the Indigenous Pachakutik Party. He missed second place by .4%, or 32,500 votes, preventing him from participating in the runoff with the first-place finisher, Arauz.

A partial recount was held at his request and suspended last week by the country’s electoral council after the body couldn’t reach a consensus on whether to proceed.

Pérez is now leading a march of Indigenous movement groups that is supposed to arrive in the capital, Quito, on Tuesday, demanding that the recount resume.

“Yes for transparency, not fraud,” chanted Indigenous marchers last week as they set out from Loja, in southern Ecuador, toward Quito.

Jack Williams, an election researcher at the Massachusetts Institute of Technology, says Pérez has presented little evidence detailing exactly what electoral fraud may have occurred.

RELATED CONTENT: Ecuador’s Democracy Should not be Derailed by False Claims of Election Fraud

“Fraud is incredibly difficult to do, so it would be likely that there would be some sort of accusation of what the mechanism would be if fraud had actually occurred,” Williams said.

In the days following the election, as results were still being released, Pérez was in second place, with a small lead ahead of the right-wing banker Lasso. But Williams, an international observer for the first-round vote, tweeted that Lasso would pull ahead because the ballots left to be counted were in more conservative areas.

Results of Ecuador’s election for 2nd place can now be determined from the large majority of votes that have been cast. This will determine who runs against the first place finisher, Andres Arauz, in the 2nd round. The 2nd place finisher is expected to be Guillermo Lasso.

“If you simulated it, it was already showing that there was going to be a really large margin for Lasso especially in Quito and Guayaquil,” he said.

In another twist, over the weekend, Ecuador’s comptroller general announced plans to audit the information system used in the first round.

Both Arauz and Lasso called the move anti-democratic and a threat to electoral independence since the comptroller general doesn’t have jurisdiction over elections.

“According to the code of Democracy and the Constitution, there is only one electoral authority, and we absolutely reject the interference and the huge intrusion of other sectors of the State into the role of the elections,” Arauz tweeted in a lengthy thread.

Arauz held a press conference on Sunday to denounce what he said was an attempt by the Moreno government to postpone the runoff vote. He also said that they had presented a complaint before the Electoral Court.

“Authorities outside the electoral process have intervened,” Lasso tweeted. “It is important to note that the competent authority within the [electoral] process is the National Electoral Council …  It’s time to defend and strengthen democracy.”

According to Valeria Coronel, a sociology professor at Ecuador’s FLACSO university, the reason the electoral council announced the results after midnight on Sunday morning was because they were concerned about the comptroller general’s audit request, which was issued hours earlier.

Huge gains for the Pachakutik Party

Regardless of the fraud claims, though, Pérez’s Indigenous party made huge gains in the first-round vote. Pachakutik had never before received close to the 19% that it achieved, just under Lasso. Pachakutik’s representatives also picked up 22 seats in the National Assembly. It’s now the second-largest party, after frontrunner Arauz’s Centro Democratico, which will control 51 seats.

Other leftist parties also made gains, a sign of the huge rejection for the current President Lenín Moreno, whose approval rating is in the single digits.

“The administrative capacity of the Lenín Moreno government has been horrendous,” said Decio Machado, a Spanish political analyst who has lived in Ecuador for more than a decade. “The country was already facing an economic crisis. The pandemic has made it even worse. On top of that, you have the austerity policies that have been imposed by Lenín Moreno’s negotiations with the IMF, which have meant the rollback of systems of health coverage that were created or being created by the Correa government.”

Moreno faced huge protests in October 2019 after accepting IMF loans and imposing austerity policies, which doubled the price of diesel. He fled the capital, Quito, and was forced to rescind the measures roughly two weeks later.

Ecuadorians also blame the president for failing to respond to the pandemic. The country has one of the highest COVID-19 death tolls per capita in the region. Researchers found that 40,000 more people died in Ecuador last year than the regional average.

“Enough of the pillage of our country,” said one Ecuadorean who was one of 120,000 Ecuadorians registered to vote from within the United States, in a video posted on Twitter.

Pérez is from Ecuador’s Azuay province, where he fought water privatization in the early 2000s, and he was jailed for his anti-mining activism under the Correa government. He most recently served as prefect — akin to governor — of Azuay province.

Pérez is a complicated figure. He’s been called a leftist for his environmental policies, but on social media, he’s vocally supported coups against leftist governments in Bolivia and Brazil.

Pérez backed conservative banker Lasso for the presidency in 2017 — the same Lasso who beat him for second place in this election.

“There are deep, deep divisions in Pachakutik. There is a left and a right-wing and Yaku Pérez represents the right-wing,” said Marc Becker, a professor of Latin American studies at Truman State University who wrote a book about Pachakutik.

“In [some] ways, Yaku Pérez is like an opportunistic politician,” Becker said. “Hence, his support for Lasso, and last week, he broke with Lasso and said he’ll never work with them.”

The question now is how the political forces will line up in the coming weeks. It’s not clear which candidate Pachakutik and other voters will now support.

Between Arauz and Lasso, it comes down to who “can gain back the trust of Indigenous communities, many of which are feeling like that trust has been extremely violated,” said Kimberly Brown, a freelance journalist based in Quito, who has covered Ecuadorian Indigenous movements for many years.

Featured image: Presidential candidate Yaku Pérez greets supporters as he leads a protest march to Quito, in Latacunga, Ecuador, Feb. 22, 2021. Pérez, who came in a close third in the recent elections, has alleged fraud after the results indicated he had fallen just short of defeating former banker Guillermo Lasso, preventing him from participating in the runoff with first-place finisher Andrés Arauz.  Credit:  Dolores Ochoa/AP