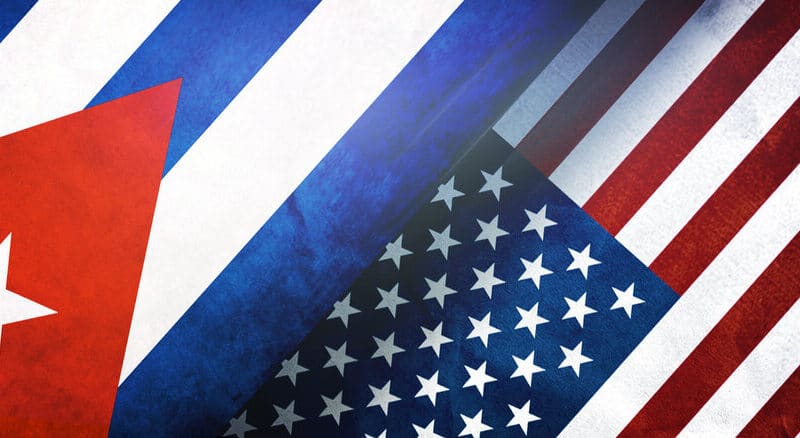 Don Foreman, National Union Representative for the 55,000 members of the Canadian Union of Postal Workers (CUPW), did an exclusive February 21 interview for The Canada Files. In the interview, he responded to a question about his own immediate personal reaction to Pompeo’s last-minute designation of Cuba as a state sponsor of terrorism. Foreman said it “was one of disgust at a last-ditch effort to completely end all progress made between the two countries under the previous administration.” Asked if he had a message to the Canadian Government that had not taken a stand:

“My message to the government is simple. Cuba knows who its friends are. The Canadian people are included as friends and are speaking up. The time has come when the Government should immediately speak out on behalf of the Canadian people and condemn the addition of Cuba to any terrorist list by the US administration.”

Furthermore, as reported in The Canada Files, two New Democratic Party MPs took a stand. In addition, the CUPW issued the following statement:

On January 11, the United States put Cuba back on their list of State Sponsors of Terrorism, having removed it from the list in 2015 as part of an agreement between the nations to restore diplomatic relations.

CUPW condemns this move. The State Department has no democratic mandate to designate countries this way; the list serves only to isolate and punish countries that, for whatever reason, are seen by the US government as uncooperative. We hope that this does not indicate a reversal of the slow rapprochement with Cuba that began under President Obama.

CUPW and our postal worker allies in Cuba would rather see an end to a pattern of sanctions since 1960 that have only hurt the Cuban people. The embargo – called el bloqueo in Cuba – is viewed internationally as outside of the norms of international relations and a violation of the United Nations Charter.

It’s particularly ironic for Cubans, who have experienced terrorism that was condoned by U.S. officials, and who lobbied for years to free the Cuban Five – Cuban agents who were detained by the United States after handing over information intended to help the U.S. prevent a terrorist attack.

We support the sovereignty and self-determination of Cuba, and we ask our members to stand with the Cuban people, who have been victims of terrorism and reject it in all its forms.”

Governments and associations from around the world spoke out, such as China, Russia, Iran and Venezuela. The World Peace Council (WPC) added its voice. However, it is striking that the Coordinating Bureau of the Non-Aligned Movement, composed of 120 countries almost all from Asia, Africa and Latin America and the African Union, composed of all 55 states on that continent, dared to raise their voices. These two associations are based in the Global South, namely in Asia, Africa and Latin America/Caribbean, with Africa belonging to both institutions.

In North America, the corporate media, normally so attracted to the term ‘terrorism,’ refuses to report on these positions held by countries in the Global South? However, this is not surprising as they also censure voices even in their own northern regions, such as the trade union organization cited above.

“Terrorism” is a highly-charged, partisan political term developed over the centuries. It is wielded by the colonial and imperial powers to the detriment of the South, the countries that have unanimously condemned the US for its latest move. It first emerged during the French Revolution of the 18th century, used by the bourgeoisie to characterize and intimidate its opponents, the Jacobins. The victims of this weaponized term are mostly countries in the South.

Look at Cuba for example. The 1960 blockade has as its explicit goal, “denying money and supplies to Cuba, to decrease monetary and real wages, to bring about hunger, desperation and overthrow of government.” Overt US-backed terrorist activities got under way soon after the 1959 Revolution, resulting since then in some 1,000 documented incidents, with more than 3,000 deaths and 2,000 injuries. The blockade is multidimensional and includes economic and cultural warfare, involving ideological, political and artistic assault, as well as the most obvious bilateral economic and extraterritorial restrictions (involving third countries that would like to trade with Cuba.)

It must therefore be said that US Cuba policy, with its differing degrees of animosity depending on the administration, is itself a genuine form of terrorism geared to overthrow the government. It is no accident that one of the most important Cuban media outlets, Cuba Debate, carries as part of its banner “contra el terrorismo mediático” (against media terrorism).

The US labels President Maduro as a “narco-terrorist” without any evidence, going so far as to slap a terrorist-type bounty on his head similar to the “wanted dead or alive” pathology of the Far West. Crippling sanctions against Venezuela were initiated by Obama and increased multifold by the Trump administration, even during the pandemic. They were interspersed with paramilitary terrorist attacks against Chavistas, government buildings and even an assassination attempt against Maduro.

The goal of the sanctions and the accompanying demonizing of Maduro, as it was against Salvador Allende in Chile, was in their own words to “make the economy scream.” In the case of Allende, it was intended to cause harm and suffering, leading up to a full-scale terrorist attack on the elected president, on the pretext of saving the economy. The objective is no different some 50 years later, in Venezuela.

Ecuador is in the vortex of elections in which the successor to Rafael Correa, Andrés Arauz, is on the verge of victory. The US and Colombia have made a last-ditch effort to stall the movement led by Arauz, using “terrorism” as the preferred weapon. Colombia, like the US, has added the leftist Colombian National Liberation Army (ELN) to its terrorist list. “The Colombian Attorney General Francisco claimed to have ‘intelligence’ proving that the Union for Hope (UNES) electoral coalition, Mr. Arauz’s party and the vehicle of supporters of former president Rafael Correa, was funded by the National Liberation Army (ELN).

Asia, Africa and the Middle East

In Asia, Western powers terrorized and massacred the Vietnamese people. Palestinians are under a permanent terrorist siege (apartheid). In Africa, the colonial powers assassinated anti-colonialist leaders, as part of its war against Black people on the African continent. The US has terrorized and assassinated black people on its own territory, such as the Black Panther Party in the 1960s and 70s.

There is no end to the list of victims. Many valuable books have been published that detail all these crimes. Who cannot forget ‘The War on Terror” after September 11, 2001, still going on today, whereby millions of people in Iraq, Afghanistan, Syria and Libya have been killed, maimed and displaced? Rather than being a war on terror, it is war by the US terrorists and its allies against the peoples in those regions.

Peoples of the world must remain vigilant against the use of the term “terrorism.” It is arbitrarily manipulated by the biggest terrorists of all, the US and its allies, against the peoples of the Global South, all of whom condemn the US for designating Cuba as a state sponsor of terrorism.