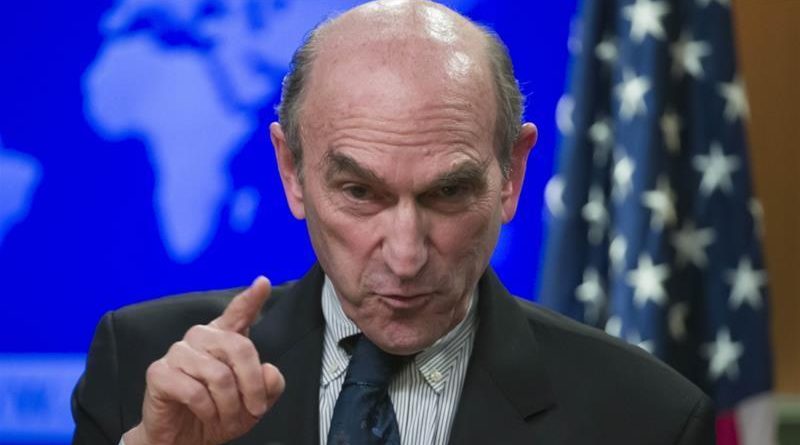 “We are not playing,” said the special envoy of the White House for Venezuela to President Nicolás Maduro.

The special envoy of Washington for Venezuela, Elliott Abrams, said on Friday that “Russia will pay a price” for its support to the Government of Nicolás Maduro. In an interview with the BBC, Abrams responded to the news about the presence of Russian military in Venezuela, confirmed by Moscow in the framework of an existing treaty of technical-military collaboration between the two nations, which was signed in 2001.

RELATED CONTENT: Escalation Between the US and Russia on Venezuela: General Overview

The security adviser asked not to take it as “a joke”, “something symbolic” or “that means nothing” the statements of the Donald Trump government that “all options” are on the table in the Venezuelan case.

US Special Rep for #Venezuela Elliott Abrams tells me #Russia will pay a price if it continues military support for @NicolasMaduro. @KateAFarrell @EArtesona pic.twitter.com/ziWW9RSm02

Moments later, the US special envoy for Venezuela declared that the US authorities have “a list of options” regarding the measures that Washington can put in place to respond to the presence of Russian soldiers in Venezuelan territory, so “it would be a mistake for Russia to think that it has freedom of action” in that Latin American country.

Along the same lines, the US National Security Adviser, John Bolton, issued a statement on Friday, stating that the White House “condemns the continued use of foreign military personnel” in Venezuela.

National Security Advisor, John Bolton.USA will consider the deployment of armed forces of other countries in Venezuela “as a direct threat to peace”
Bolton signals that the Venezuelan leader, Nicolás Maduro, introduced Russian military personnel and equipment “in his attempt to remain in power.”

Bolton’s statement comes in sync with the statements made by Trump last Wednesday, who said that the Russian military should leave Venezuela and reiterated that ” all options ” are open for that to happen.

For its part, the Ministry of Foreign Affairs of Russia reported on Tuesday that Russian specialists are in Venezuelan territory” in strict accordance with the Constitution of that country and with full respect for its legislative standards,” according to its spokeswoman, Maria Zajárova.

Referring to Washington’s demand that Russia leave the South American country, Zajárova said that “it is an arrogant attempt to dictate to two sovereign States how to build relationships.” “Neither Russia nor Venezuela are US provinces ,” he added.