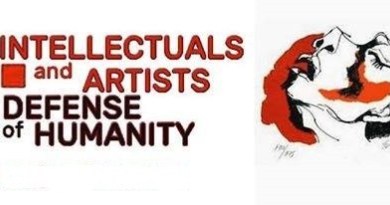 For the umpteenth time you have burst in with offensive and irresponsible adjectives to reprimand humanist-inspired governments that, in the face of a very serious universal pandemic, are making decisions for the benefit of their peoples. The grotesque impunity of your sophistries become obscene when you accuse anyone who takes on the immense task of repairing the economic and social disasters produced by the very governments that you exalt as defenders of freedom simply because they give free rein to the macabre social Darwinism of the markets. You are impudent spokespeople for reactionary, genocidal and corruption-infested governments that are responsible for thousands of deaths, yet you do not hesitate to disqualify as “regime” governments that express the democratic will of the people and that take care of their physical and spiritual health at all times, something that those who serve as your models do not do.

The content and form, opportunistic and scavenging, with which its barrage of slander operates has become unbearable, boosted by a chorus of media consortiums specialized in lying and misinformation, co-responsible for a good part of the tragedies that our peoples are experiencing.

That is why we are now saying enough; and to publicly call on your Foundation to engage in an in-depth, frontal debate on the serious situation caused by the combination of the COVID-19 and the current deep economic depression. A debate in which we will be able to demonstrate the mercantile servitude of your behavior, contrary to the historical social needs that today, more than ever, are demanding a prioritization of the life of the planet and of human beings over the profits of transnational corporations or the deceitful “magic” of the markets. We call on you once again, as we have already done in many international forums to which you have always refused to engage, knowing that you lack arguments to justify your ideological or political positions. And you did so without the least bit of pride, protected as always by the “armor” of the big media, which hides the misdeeds of IDF members, their intellectual mentors and their “disinterested” donors. Enough of that!

Your neoliberal and pseudo-republican ideological hodgepodge is empty talk that no longer serves to mask the thefts (frauds?) of the governments and economic groups that sponsor the Foundation. The reality shows that you have been a servile group of the worst interests of the structural corruption of capitalism, hiding behind a cloak of empty but high-flowing rhetoric hiding the exploitation of men, women and children who were deprived of their rights and subjected to limitless indignities. But not only that: you have also seen their natural resources plundered, deprecated and destroyed, sacrificed fiercely on the altar of profit, and instead of condemning such atrocities you extol them as models of good governance. It is immoral, and therefore unacceptable, to defend the economic privilege of a few businessmen; the justification of a world where the richest 1 per cent holds more wealth than the rest of humanity. All of this is an affront to sanity, it insults the dignity and intelligence of people and disregards, in a display of new medieval obscurantism, the recommendations of the sciences that call for an end to the destructive force of the markets. In the midst of a planetary pandemic, it is even more unacceptable to speak out against those who are fighting hard to save lives and social rights while remaining silent about the fact that their friendly governments are blocking the arrival of basic inputs to combat the pandemic. This behavior, which you endorse for your eternal dishonor, is called “a crime against humanity”.

RELATED CONTENT: Cuba has Anti-Coronavirus Medical Brigades in 21 Countries
We’re sick and tired of the capital’s hit men talk. Let us face the debate so that we can make it clear, with all your names, what interests you defend and why you have thrown away your talents and, where appropriate, your prestige, to become what you are: a deplorable lackey of the financial mafias that dominate the world economy.

Let’s discuss the role of the State today in defense of the planet and humanity.

Let’s take stock of the social and ecological holocaust produced by the policies that you proclaim, embody and publicize.

Let’s discuss the comparative merits of unbridled selfishness and individualism versus the ethics of solidarity and the economy of good life for all.

Let’s discuss what sustainable modes of production and fair production relationships will be in the world to come, which will no longer be the same.

Let us discuss exemplary methods of action against corruption, against the accumulation of wealth in a few hands, against hunger.

Let’s discuss a world with full participatory democracy, with education, health, housing, social security, unrestricted labor justice and democratized media so that “one world, multiple voices” can be true.

Unlike you, we are not bullies paid by friends of business and supported by the rogue press that pretends to pass for “independent journalism”. Faithful to the best humanist tradition, we believe in debate and dialogue to reach its ultimate consequences. We owe it to our peoples and to all the victims, direct and indirect, of neoliberalism.

You decide on the place and the date to, definitively, debate the crucial points.