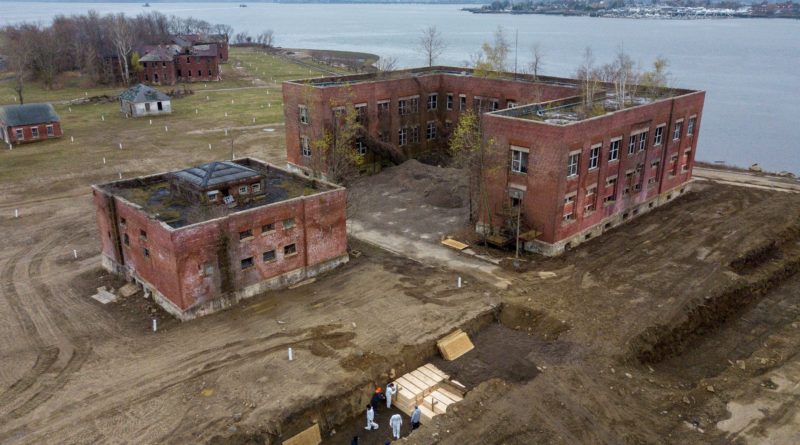 The island has been used as a potter’s field — a burial site for the city’s unidentified deceased or those without means for burial elsewhere — since the 19th century. The Washington Post reported that since the outbreak of the new coronavirus, burials on the island have grown from an average of 25 per week to a peak of 120. While access to the island is usually limited, during the pandemic it has been completely shut off to the press, Gothamist reported.

Steinmetz told the U.S. Press Freedom Tracker that he was piloting his drone at dawn on that Tuesday from a parking lot in City Island in the Bronx, which is a half mile away from Hart Island. He was accompanied by a CBS News journalist, as the outlet was doing a video piece on Steinmetz and his photography of the city amid COVID-19.

Minutes after starting to take pictures of the island, a group of plainclothes NYPD officers exited an unmarked van and told him to land the drone, Steinmetz said.

The officers initially demanded that Steinmetz show them the photos he had taken, which he did, and then asked him to turn over his memory card. He told the Tracker he refused.

Steinmetz said that the officers did not work at the local precinct, and therefore he waited with them in the parking lot for nearly an hour until another officer could bring the correct paperwork to seize the drone and censure Steinmetz.

Ultimately, in addition to the seizure of his $1,500 drone, the officers issued Steinmetz a misdemeanor summons for “avigation,” a law which prevents private individuals from launching drones anywhere in the metro area that isn’t an airport. According to Steinmetz, he faces up to a $1,000 fine for violating the regulation.

“The law about avigation is really written for flying over densely populated parts of New York City — like lower Manhattan — where with all the radio and cell traffic and microwaves it’s possible to lose contact with the drone or it could crash into a building and fall onto people’s heads,” Steinmetz said.

Steinmetz said that since the drone was flying over the water, it couldn’t endanger anyone.

“It was clear to me that they were trying to harass the press,” he said.

Mickey Osterreicher, general counsel for the National Press Photographers Association, told the Tracker that while Steinmetz has a FAA license to pilot a drone, that only prevents him from running afoul of the federal regulations. That does not matter under the city’s avigation restrictions, Osterreicher said.

“In one sense, I understand why the police see the drone as evidence, but in another sense it’s like taking a journalist’s camera: This is a device that he or she is using to gather and disseminate news and by taking it from them it is depriving them of the ability to do that, because drones are not inexpensive,” Osterreicher said.

When asked about the return of Steinmetz’s drone and maximum penalties for violating the avigation law, an NYPD spokesperson emailed this statement: “Drones are illegal to fly in New York City except for authorized areas. The areas approved for flying drones are very limited and set by the FAA.”

Osterreicher noted that Steinmetz is the second journalist whose drone was seized while attempting to photograph Hart Island in recent weeks. He added that police returned the drone to the first photojournalist the following day, but declined to publicly identify that journalist. As of publication, Steinmetz’s drone had not been returned.

A spokesperson for the Department of Corrections, which oversees Hart Island and typically conducts the burials, told Gothamist in a statement, “Out of respect to the families and friends of those buried on Hart Island, we have a longstanding policy of not permitting photography of an active burial site from Hart Island. It is disrespectful.”

Featured image: Drone images of bodies being buried on New York’s Hart Island were captured on April 9. About a week later, a photojournalist capturing similar images was issued a citation and had his drone seized by the New York Police Department.