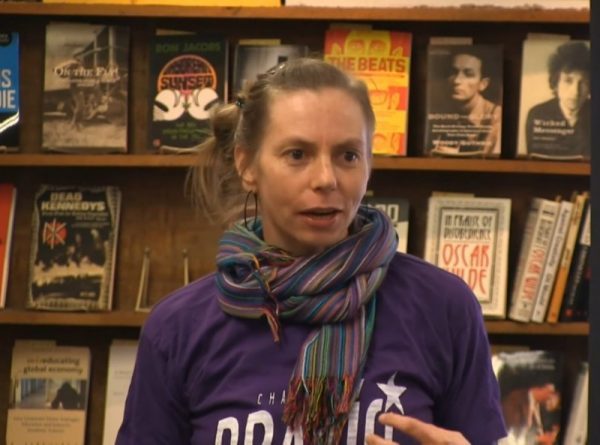 Minneapolis, March 13th, 2019.- On March 10, 30 people gathered at Mayday Books for a program presented by Katrina Kozarek, a longtime Venezuela resident and an audiovisual reporter for Venezuelanalysis.com. In the presentation entitled “Eyewitness in Venezuela,” Kozarek detailed the grassroots people’s movements that created the current political infrastructure in Venezuela, as well as the current threat to Venezuelan sovereignty posed by the United States.

On January 23, President Trump recognized Juan Guaido, the head of the Venezuelan National Assembly, as the interim ‘president’ of Venezuela. Since then, the U.S. has been taking increasingly hostile measures against the Venezuelan people – intensifying sanctions, influencing right-wing allied nations in the region, sending arms and razor wire to the opposition disguised as aid, and most recently, causing a country-wide electricity blackout in Venezuela by means of a coordinated cyber-attack.

Kozarek, who has lived and worked in Venezuela since 2004 as a documentary filmmaker and activist, began the presentation by detailing how the Bolivarian revolution is a genuine people’s movement, stating, “It sprung up from the grass roots, it’s not something that came from the top down.” Kozarek continued, “It developed into a whole political project with the possibility to really create profound social and political changes within the country.”

An excerpt from the documentary Venezuela Bolivariana was shown, which detailed how the popular people’s movement that had been in motion since 1989 was the force that brought Hugo Chavez to power in 1998, established progressive reforms in Venezuela, and successfully resisted the coup orchestrated by the United States in 2002. After the film excerpt, Kozarek explained further, “Any similarities between 2002 and what’s happening right now in Venezuela is not a coincidence. It’s the same kind of U.S. intervention.”

Kozarek gave a lesson on the operation of communes as an organ of direct participatory democracy in Venezuela, as well as short videos detailing the activities of the El Maizal and José Pío Tamayo communes in particular. These communes seized farms and factories that had been previously been left unused – or were abandoned outright – by capitalist enterprises and converted them into productive facilities that bolstered Venezuela’s food sovereignty.

The program included an update on the recent developments in Venezuela by CJ McCormick of the Anti-War Committee. McCormick detailed the ways that global privatization is a major contributor to the current situation in Venezuela. “What the National Assembly under Guaido has tried to do multiple times is to privatize Venezuelan oil,” said McCormick, “It’s not something that they have the power to do, but it’s something that they very much want to do.” McCormick then connected this with National Security Advisor John Bolton’s position regarding the development of a privatized Venezuelan oil industry.

McCormick also delved into the demographic makeup and class dynamics of Venezuelan politics, noting, “What they don’t tell you in the U.S. media is that ‘richer’ Venezuelans are also ‘whiter’ Venezuelans, allied with racial supremacy.” McCormick continued, “A lot of the poorer Venezuelans are Indigenous- and Afro-Venezuelans, and they’re the ones who get lynched whenever the right incites these huge mobs against people.”

Organizers of the event encouraged supporters to attend the upcoming protest on March 15 organized by the Anti-War Committee to send anti-war message to Minnesota Senator Amy Klobuchar and to also attend the March 17 presentation “The U.S. Orchestrated Coup in Venezuela: A Marxist Perspective” featuring Sean Orr and organized by Freedom Road Socialist Organization.

The March 10 event was organized by the Anti-War Committee.