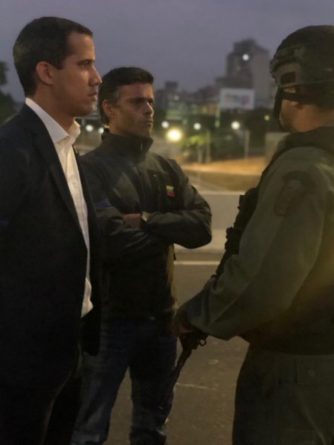 With great excitement in the early hours of April 30, it was announced that the day of Venezuela’s liberation had finallyarrived. Accompanied by heavily armed military men, Juan Guaidó announced that the armed forces were on his side and that this was the beginning of “the definitive end of the usurpation“. In the afternoon, the excitement of the coup attempt had vanished, Juan Guaido and Leopoldo López (who was released hours earlier) were lost in silence; the adventure was over. This is undoubtedly an additional episode of incitement to violence led by the Venezuelan opposition, however there are lessons that should be considered regarding the fabrication of scenarios in social media and the legal liability they should entail.

At 6 o’clock in the morning (Venezuelan time) on Tuesday, April 30, Juan Guaidó published a video and a series of tweets claiming that he was “with the main units of the armed forces” and calling for a collective action against the Government. In his message, he emphasized that “there are already many military personnel who join, (to) our armed forces’ family who already took the step“. Then, a wave of news focused on the fact that the military post at La Carlota had been taken. The objective was to create a favourable scenario for greater support from the armed forces and the general public.

RELATED CONTENT: Diosdado Cabello: President Maduro Will Receive Rectification Proposals from Grassroots Organizations – Because of Him There is Peace Today in Venezuela

Consequently, the government of the United States and its allies offered their unequivocal support for the attempted coup. One of the first to rise his voice was the President of Colombia through his twitter account –in an act of international aggression– calling the Venezuelan military and the population to rise against the dictator. The presidents of Argentina, Brazil, Chile, Ecuador, Panama, Paraguay, the Foreign Ministry of Canada and Peru, the Organization of American States and the President of the European Parliament followed. This media hysteria led to believe that the coup was taking place in reality. The corporate media were also part of this plot, for example CNN was one of the first to report, assuring that Guaidó was in La Carlota and that he had great support from the armed forces.

Subsequently, the media in Venezuela reported the situation at the military base of La Carlota, showing demonstrations in the surrounding areas, and that they did not manage to enter the facilities. On the other hand, the true story of the soldiers accompanying Mr. Guaidó was revealed. Through a fake mission, the officials were sent to the Altamira area; they were later informed that it was actually a coup d’état. At a press conference, Defence Minister Vladimir Padrino informed that this was a small group of officers from which 80 percent were deceived. Hours later, it was reported that Mr.Leopoldo López was in the Chilean embassy, and later went to seek refuge at the Spanish embassy. In addition, it was reported that 25 Venezuelan officers were requesting asylum in the Brazilian embassy.

These events were undoubtedly a defeat, not only for the attempted coup leaders in Venezuela, but for the government of the United States that openly confirmed to be involved in the process. The media battle did not stop, the US government through the National Security Advisor John Bolton called senior Venezuelan officials to defect, in exchange they would be excluded from the list of US sanctions. Next, Secretary of State Mike Pompeo aggressively declared that a military intervention was possible.

The corporate media and social networks have become sophisticated weapons of modern warfare. On April 30, a coup d’état has been attempted through a media montage. It is important to note that these actions are part of a coordinated and continuous process between corporate media and political actors through social networks. A recent survey conducted by the national media watch group FAIR, based in New York, concludes that “corporate news coverage of Venezuela can only be described as a full-scale marketing campaign for regime change”. The study conducted over a period of three months (01/15/19 – 04/15/19), shows that zero opinion pieces in the New York Times and Washington Post took an anti–regime change or pro-Venezuelan government position. This was also the case for the big three Sunday morning talkshowsor PBS NewsHour.

In the political arena, public officials have entered into a form of social media diplomacy. The way in which the aforementioned presidents encouraged a crime by supporting a coup d’état in Venezuela is deplorable. The government of the United States went even further by instigating the uprisingand by threatening with a military intervention. It is alarming, the way in which diplomacy and the use of official channels of communication has been replaced by social media; its use has become so indiscriminate and irresponsible that even innocent people’s safety can be endangered.

Statements in social media are subject to a growing attentionin the legal field. There is an increasing jurisprudence in local courts, mainly in the United States and Europe, attributing criminal liability for statements via Facebook and Twitter. The most common crimes are defamation, threatening, harassment, fraud, and disclosure of confidential information. Given the ever growing importance of social networks, it is expected that more robust legislation will be produced to regulate this area.

But what happens when its irresponsible use comes from a public official who represents the interests of a State? The responsibility should be even greater, given that the effects of a declaration not only concern the internal but also the international sphere. A good example in this regard took place in the United States, when a court inquired about the President’s tweets and how official they are, the answer wasthat the government is treating the President’s statements… whether by tweet, speech or interview as official statements of the President of the United States.

The events of April 30 must lead us to reflect on the transgression of international law by the representatives of several countries through their twitter accounts, in violation of the principle of non-interference established in the United Nations Charter. The statements made by the President of Colombia and the representatives of the United States, calling on the Venezuelan armed forces to overthrow President Maduro may even –and depending on its consequences– be taken as acts of aggression, in contravention of the Rome Statute of the International Criminal Court. These actions, without a doubt, will go down in history as attacks that are not only illegal, but immoral and are not up to the investiture of a State dignitary and the peoples they represent.

Jesse Chacón Escamillo: Ambassador of Venezuela in Austria and Permanent Representative to the United Nations