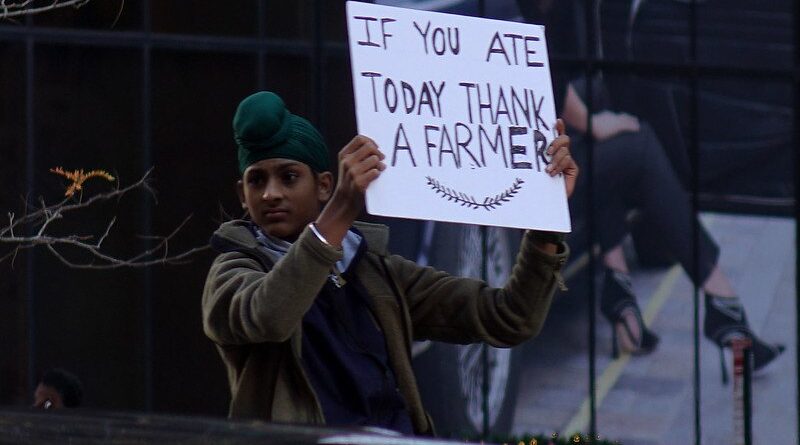 Globally, there is an ongoing trend of a handful of big companies determining what food is grown, how it is grown, what is in it and who sells it. This model involves highly processed food adulterated with chemical inputs ending up in large near-monopoly supermarket chains or fast-food outlets that rely on industrial-scale farming.

While the brands lining the shelves of giant retail outlets seem vast, a handful of food companies own these brands which, in turn, rely on a relatively narrow range of produce for ingredients. At the same time, this illusion of choice often comes at the expense of food security in poorer countries that were compelled to restructure their agriculture to facilitate agro-exports courtesy of the World Bank, IMF, the WTO and global agribusiness interests.

In Mexico, transnational food retail and processing companies have taken over food distribution channels, replacing local foods with cheap processed items, often with the direct support of the government. Free trade and investment agreements have been critical to this process and the consequences for public health have been catastrophic.

Mexico’s National Institute for Public Health released the results of a national survey of food security and nutrition in 2012. Between 1988 and 2012, the proportion of overweight women between the ages of 20 and 49 increased from 25 to 35 per cent and the number of obese women in this age group increased from 9 to 37 per cent. Some 29 per cent of Mexican children between the ages of 5 and 11 were found to be overweight, as were 35 per cent of the youngsters between 11 and 19, while one in ten school age children experienced anaemia.

Former Special Rapporteur on the Right to Food, Olivier De Schutter, concludes that trade policies had favoured a greater reliance on heavily processed and refined foods with a long shelf life rather than on the consumption of fresh and more perishable foods, particularly fruit and vegetables. He added that the overweight and obesity emergency that Mexico faces could have been avoided.

In 2015, the non-profit organisation GRAIN reported that the North America Free Trade Agreement (NAFTA) led to the direct investment in food processing and a change in Mexico’s retail structure (towards supermarkets and convenience stores) as well as the emergence of global agribusiness and transnational food companies in the country.

NAFTA eliminated rules preventing foreign investors from owning more than 49 per cent of a company. It also prohibited minimum amounts of domestic content in production and increased rights for foreign investors to retain profits and returns from initial investments. By 1999, US companies had invested 5.3 billion dollars in Mexico’s food processing industry, a 25-fold increase in just 12 years.

US food corporations began to colonise the dominant food distribution networks of small-scale vendors, known as tiendas (corner shops). This helped spread nutritionally poor food as they allowed these corporations to sell and promote their foods to poorer populations in small towns and communities. By 2012, retail chains had displaced tiendas as Mexico’s main source of food sales.

In Mexico, the loss of food sovereignty induced catastrophic changes to the nation’s diet and many small-scale farmers lost their livelihoods, which was accelerated by the dumping of surplus commodities (produced at below the cost of production due to subsidies) from the US. NAFTA rapidly drove millions of Mexican farmers, ranchers and small business people into bankruptcy, leading to the flight of millions of immigrant workers.

What happened in Mexico should serve as a warning as Indian farmers continue their protest against three recent farm bills that are designed to fully corporatize the agrifood sector through contract farming, the massive roll-back of public sector support systems, a reliance on imports (boosted by a future US trade deal) and the acceleration of large-scale (online) retail.

If you want to know the eventual fate of India’s local markets and small retailers, look no further than what US Treasury Secretary Steven Mnuchin said in 2019. He stated that Amazon had “destroyed the retail industry across the United States.”

And if you want to know the eventual fate of India’s farmers, look no further than the 1990s when the IMF and World Bank advised India to shift hundreds of millions out of agriculture in return for up to more than $120 billion in loans at the time.

India was directed to dismantle its state-owned seed supply system, reduce subsidies, run down public agriculture institutions and offer incentives for the growing of cash crops for export to earn foreign exchange. Part of the strategy would also involve changing land laws so that land could be sold and amalgamated for industrial-scale farming.

The plan was for foreign corporations to capture the sector, with the aforementioned policies having effectively weakened or displaced independent cultivators.

To date, this process has been slow but the recent legislation could finally deliver a knock-out blow to tens of millions of farmers and give what the likes of Amazon, Walmart, Facebook, Cargill, Archer Daniels Midlands, Louis Dreyfus, Bunge and the global agritech, seed and agrochemical corporations have wanted all along. It will also serve the retail/agribusiness/logistics interests of India’s richest man, Mukesh Ambani, and its sixth richest, Gautam Adani.

During their ongoing protests, farmers have been teargassed, smeared and beaten. Journalist Satya Sagar notes that government advisors fear that seeming to appear weak with the agitating farmers would not sit well with foreign agrifood investors and could stop the flow of big money into the sector – and the economy as a whole.

And it is indeed ‘big’ money. Facebook invested 5.5 billion dollars last year in Mukesh Ambani’s Jio Platforms (e-commerce retail). Google has also invested 4.5 billion dollars. Currently, Amazon and Flipkart (Walmart has an 81% stake) together control over 60% of the country’s overall e-commerce market. These and other international investors have a great deal to lose if the recent farm legislation is repealed. So does the Indian government.

Since the 1990s, when India opened up to neoliberal economics, the country has become increasingly dependent on inflows of foreign capital. Policies are being governed by the drive to attract and retain foreign investment and maintain ‘market confidence’ by ceding to the demands of international capital. ‘Foreign direct investment’ has thus become the holy grail of the Modi-led administration.

Little wonder the government needs to be seen as acting ‘tough’ on protesting farmers because now, more than ever, attracting and retaining foreign reserves will be required to purchase food on the international market once India surrenders responsibility for its food policy to private players by eliminating its buffer stocks.

The plan to radically restructure agrifood in the country is being sold to the public under the guise of ‘modernising’ the sector. And this is to be carried out by self-proclaimed ‘wealth creators’ like Zuckerberg, Bezos and Ambani who are highly experienced at creating wealth – for themselves.

According to the recent Oxfam report ‘The Inequality Virus’, Mukesh Ambani doubled his wealth between March and October 2020. The coronavirus-related lockdown in India resulted in the country’s billionaires increasing their wealth by around 35 per cent, while 170,000 people lost their jobs every hour in April 2020 alone.

Prior to the lockdown, Oxfam reported that 73 per cent of the wealth generated in 2017 went to the richest 1 per cent, while 670 million Indians, the poorest half of the population, saw only a 1 per cent increase in their wealth.

Moreover, the fortunes of India’s billionaires increased by almost 10 times over a decade and their total wealth was higher than the entire Union budget of India for the fiscal year 2018-19.

It is clear who these ‘wealth creators’ create wealth for. On the People’s Review site, Tanmoy Ibrahim writes a piece on India’s billionaire class, with a strong focus on Ambani and Adani. By outlining the nature of crony capitalism in India, it is clear that Modi’s ‘wealth creators’ are given carte blanche to plunder the public purse, people and the environment, while real wealth creators – not least the farmers – are fighting for existence.

The current struggle should not be regarded as a battle between the government and farmers. If what happened in Mexico is anything to go by, the outcome will adversely affect the entire nation in terms of the further deterioration of public health and the loss of livelihoods.

Consider that rates of obesity in India have already tripled in the last two decades and the nation is fast becoming the diabetes and heart disease capital of the world. According to the National Family Health Survey (NFHS-4), between 2005 and 2015 the number of obese people doubled, even though one in five children in the 5-9 year age group were found to be stunted.

These individuals are poised to siphon off the wealth of India’s agrifood sector while denying the livelihoods of many millions of small-scale farmers and local mom and pop retailers while undermining the health of the nation.

Colin Todhunter was named in August 2018 by Transcend Media Services as one of 400 Living Peace and Justice Leaders and Models in recognition of his journalism. Join him on Twitter at https://twitter.com/1ColinT Read other articles by Colin.