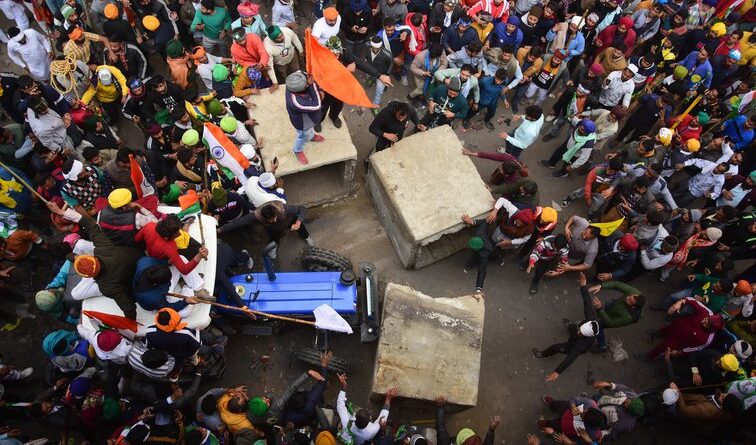 The Modi government’s efforts to repress dissent expose its growing authoritarianism, which must be challenged. If not, far more serious violence lies ahead.

This is not a sentence I expected to write, but Rihanna was right to ask why the world isn’t paying more attention to the farmers’ protests in India.

On Tuesday, the Barbadian pop star tweeted a CNN report to her 101 million followers, which detailed the latest attempt by India’s government to suppress the tens of thousands of farmers who have descended on Delhi in protest at agricultural reforms.

The farmers, many of whom come from the Punjab region of northern India, which has a large Sikh population, say that the government’s attempt to deregulate the agricultural sector will destroy their livelihoods. But this isn’t just a matter for India, and it’s not just about the reforms. Sikhs are now being threatened with potentially devastating pogroms – and without global attention, the government might even get away with it.

Since the protests began last year, Narendra Modi’s far-right government has tried to violently suppress them, lashing out at critics in a way that exposes just how close “the world’s largest democracy” is to becoming an authoritarian state. Protesters in Delhi have been surrounded by barricades and barbed wire, and had their internet, water and food supplies cut off, and more than a hundred farmers have ‘gone missing’. There are claims that at least one woman activist was detained and sexually assaulted.

The government is also using the criminal justice system to intimidate critics. As Human Rights Watch says, activists have been targeted with “politically motivated” charges against activists, and charged journalists and opposition politicians with “sedition” for reporting on claims made by the family of a dead protester.

This is not how a democracy should act. Now farmers face an even bigger threat. Sikh farmers from Punjab dominate the protests, having led the first major march in the capital. But Sikhs, who make up around 2 per cent of India’s population, are being demonised by government supporters, and attacked on the basis of their faith.

RELATED CONTENT: Viral Inequality and the Farmers’ Struggle in India

In recent weeks there have been transparent attempts by some in the Indian media to paint the farmers as being overrun by Sikh separatists, or to claim they are working for Pakistan. When some farmers stormed Delhi’s historic Red Fort last week, some in the media had a meltdown and implied that the entire nation had been humiliated.

Religious pogroms are horrifyingly common in India. There was a minor pogrom against Muslims in Delhi in January last year, a major one in Gujarat in 2002, and more in Mumbai in 1992. Christians have faced a rise in violence since 1998. And for Sikhs like me, the year 1984 – the year of what we call the Sikh Genocide – is firmly etched into our collective memory.

That year, India’s then-prime minister Indira Gandhi launched a military assault on the Golden Temple in Amritsar, Sikhism’s holiest shrine, which was occupied by groups demanding greater autonomy. After Gandhi was assassinated by her Sikh bodyguards in retaliation, thousands of Sikhs across the country were murdered in religious pogroms, with the connivance of Gandhi’s governing Indian National Congress party.

Many Sikhs now worry that a second massacre is on the way. They have good reason. “Repeat 1984” has become the rallying cry of some Hindu nationalist social media users who support Modi’s government.

Some activists, driven by the ‘Hindutva’ Hindu nationalist ideology that underpins Modi’s governing Bharatiya Janata Party (BJP) have already started holding menacing rallies outside Sikh places of worship. They had implicit sanction from the top when Modi claimed, falsely, that the Indian flag had been “insulted” by the protesters who stormed the Red Fort. (It wasn’t. Farmers didn’t touch the Indian flag.)

A country where Hindus come first

The BJP and its allies are using a classic divide-and-rule tactic, which they have copied from British colonialists. But it is part of a broader strategy to turn India into a Hindu theocracy.

The government sees India as a country for Hindus, first and foremost. All others are second-class citizens who must continually prove their loyalty. Hindu nationalists like to say that Sikhs are part of “the Hindu umbrella” and therefore an integral part of India – unlike Muslims and Christians – but recent events have exposed the hollowness of their claim.

India is a multi-faith country being transformed into a country where Hindus are top-tier citizens and everyone else is below them on the pecking order. Anyone who disagrees is painted as ‘anti-national’. Last year, when Indian Muslims protested peacefully against a law that aimed to exclude many Muslims from citizenship, they were accused of being potential terrorists working for Pakistan. During the pogrom in Delhi in January 2020, erroneously framed as a “riot” by many media outlets, police either stood by or took part.

The Punjabi Sikhs who have camped out on the outskirts of Delhi are not going to back down. For many the protests are a final stand, to protect their livelihoods. Tensions are running high and it could take just one spark to ignite widespread violence against Sikhs across the country.

If that happens, then the effects will be felt far more widely. For Sikhs living abroad – many of whom are in the UK, Canada and US – this is a personal matter, as they have strong cultural and family links to Punjab. The Sikh diaspora is often the only way in which Sikhs in India get heard, and it is unlikely to stay silent.

Since 2014, India’s government has managed to escape serious international condemnation. But its democratic facade is rapidly collapsing. If we are serious about standing up for democratic values then we must face up to the growing authoritarianism in India. We once made the mistake of ignoring Donald Trump; we cannot afford to ignore this.