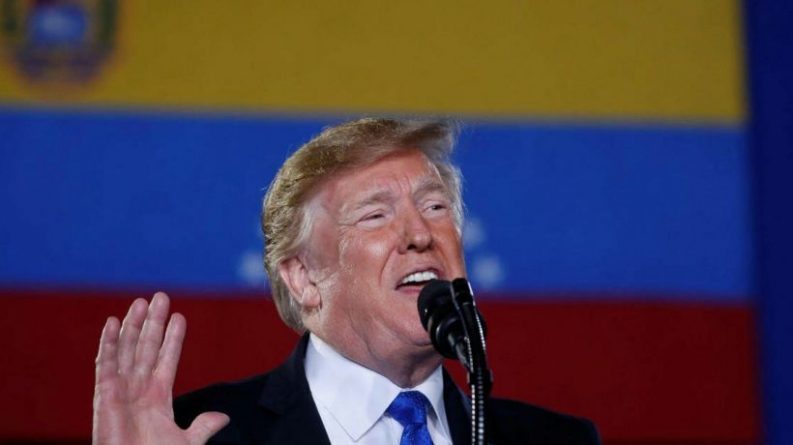 In an event with the “Venezuelan Diaspora” assembled in an auditorium of the International University of Florida, President Donald Trump issued a speech that had been announced with high expectations.

A few days from February 23, date in which the anti-Chavista (opposition) and Washington seek to resume the offensive using the umbrella of “humanitarian aid” from Cúcuta and possibly other border points, the Trump speech was expected to consolidate the bellicose rhetoric of the past days and oxygenate the mood of the opposition base.

The intervention of the US president lasted about 30 minutes, the event took place under the guise of an election campaign with the intention of keeping the increasingly influential Venezuelan electoral mass in the state of Florida happy.

The 2020 presidential election is just around the corner and Florida can once again be the turning point.

Trump began his speech by greeting Senators Marco Rubio and Rick Scott, Representative Mario Díaz-Balart, OAS Ambassador Carlos Trujillo and National Security Advisor John Bolton, in whom he has entrusted the course of US foreign policy towards Venezuela under a hard line approach.

INTERNAL POLITICS, ABSURDITIES AND FORCED COMPARISONS
In the course of his words, he dedicated a large part to criminalizing socialism by using it as a factor of polarization against the Democratic Party.

Although he cataloged the Latin American region as an area where socialism was in its “twilight”, the real interest was in sending a message for US internal politics : to use the figure of Maduro, and the alleged failure of the socialist model in Venezuela, to terrorize the electorate ahead of an eventual victory of the Democratic Party in 2020.

In the absurd logic of Trump, the Democratic Party is the simile of Nicolás Maduro on US soil, so the forced departure of the Venezuelan leader would be an extension of his internal political clashes. A direct message to the electorate of the Cuban-Venezuelan “diaspora”, which according to his calculation will vote in big numbers for him so that what happens in Venezuela will not be repeated in Florida. This reasoning is only understood there.

In the same line of demonization of the leadership of President Maduro, he elevated the slogan that “the United States will never be a socialist country.” Thus, placing in a binary scheme the pre-electoral confrontation in which he is submerged, he also took his own contradictions to the maximum, since to assume himself defender of the free market in front of the “socialist ideas” of the opposing side is radically opposed to his protectionist and war policies commercial.

With a speech that brushed  religiosity, highly decontextualized, Trump predicted that “for the first time in history there will be a free hemisphere of socialism,” referring directly to Latin America. The supposed resurgence of the continent after the application of the soft-coup method in recent years against the progressive bloc, contrasts with the return to a semi-slavery economy in Brazil, the growth of poverty in Argentina, the caravans of Central American migrants and the State terrorism that cries out daily in Colombia.

All situations that are not the result precisely of socialist policies, but consequences of coups, judicial and military interventions and the extreme plundering of a capitalist system in crisis that exports its contradictions to the Latin American periphery.

A TAILORED DISCOURSE AND EXALTATION OF TERRORISM (BOLTON’S HAND)
Trump also used phrases and commonplaces designed specifically for the audience in front of him. Expressions such as “Maduro is a Cuban puppet” were used to raise the spirits of the fans in the audience, gain some more applause (and votes) and achieve the ovation they so badly needed to distract attention from their most recent failure to obtain funding. in Congress to expand the wall with Mexico.

An audience that has organic leaders as extremist spokespersons like Luis Almagro or María Corina Machado, welcomed these demagogic clichés.  Along the same line, he also qualified the former CICPC Óscar Pérez as hero, who was discharged last year after forming a paramilitary-type cell that attacked Caracas’ institutional buildings with shots and grenades, placing at risk the lives of workers and children in a preschool at the capital’s headquarters of the Supreme Court of Justice.

His short career as “Rambo criollo” , camouflaged in an evangelical posture mixed with a self-help speech, had its final action with a terrorist attack on a military barracks in Los Teques, Miranda, where he menaced members of the Bolivarian National Guard (at gunpoint) and took possession various weapons.

The mention of Perez in the middle of Trump’s speech, who also granted a brief right of speech to his mother, seems to have the copyright of John Bolton. A message that, while legitimizing terrorism and irregular war as valid resources to confront the Venezuelan government, also enhances the role of Florida as a logistical base for the failed assassination of August 4, the preparation of the coup of the former Colonel Oswaldo García Palomo and the financing of terrorist agendas.

Precisely from Florida. resources and support of all kinds have been managed so that the mercenary agenda is imposed as a breaking point of the Venezuelan conflict, for this reason the mention of Óscar Pérez in the auditorium was not only intended for a specific audience, receptive to this type of messages, but also to emphasize that the letter of professional and mercenary violence is actively to be used.

The meta-message is the following: to stimulate the emergence of another figure as Óscar Pérez who will have the support and legitimacy of the United States.

Recall that a couple of months ago, President Nicolás Maduro denounced John Bolton as behind a plan to assassinate him and in the creation of a false positive with mercenaries hired to enable an intervention, after the simulation of a coup d’état.

CALLS FOR A MILITARY COUP, “HUMANITARIAN AID” AND OTHER PARADOXES
As usual, Trump said that all “options are on the table”, indirectly referring to the use of military intervention to force a change of government in Venezuela. He called on the military to withdraw its support of Maduro, allow the entry of “humanitarian aid”, at the risk of “losing everything they have” if they do not accept the amnesty proposed by the artificial government of Juan Guaidó.

His summons to a military uprising was accompanied by a discourse of menace to the FANB, indicating that “they would have no escape” if they continue to support Maduro, as if it were a particular decision and not a mandate of the Venezuelan Constitution after the elections of May 20, where Nicolás Maduro was reelected as President and Commander of the FANB.

Trump was applauded by the “diaspora” who votes in Florida (Photo: local10 . Com )

Paradoxically, after trying to intimidate the Venezuelan military high command, he recognized its importance to “restore democracy” and as a strategic factor for the change of the regime.

In summary, Trump assumed that the FANB maintains its current chain of command and that without its fracture, so promoted by its cabinet of war against Venezuela, Juan Guaidó has little chance of exercising a practical power that makes viable the extraconstitutional exit of Nicolás Maduro from power.

Thus, he acknowledged that the effectiveness of US support for the “parallel government” of Guaidó, the crude economic and financial sanctions against the country and the strategy of provoking a military confrontation using the “humanitarian aid” cover, ultimately depend of a variable that escapes its control: the FANB.

NATIONAL SECURITY STRATEGY AND THE BREAKDOWN OF THE ALBA AXIS
Trump’s speech was an adaptation of the National Security Strategy for Florida’s consumption. This document that governs US foreign policy stresses that, in a hypercompetitive world, where its hegemony by China and Russia is challenged, the United States is enabled to use all its political, economic, financial and military resources to maintain geopolitical supremacy and defend the American lifestyle.

In this strategy, presented in 2018, which breaks with the previous Bush and Obama strategy by returning to a Cold War language with protectionist ideas, draws a world in which the United States has as a strategic objective to reduce the presence of China and Russia in areas of geostrategic interests to extend the lifetime of their hegemony. One of those areas is, logically, Venezuela, which in recent years has expanded its relations with the two Eurasian powers in areas ranging from the financial to the military.

For that same reason, and using the narrative of the “troika of tyranny” of John Bolton, Trump said that the overthrow of the constitutional government of Venezuela is also a shot over the bow at Cuba and Nicaragua, these three countries making up the center of gravity of the ALBA axis as a counterweight to the US hegemony in the region. The blow is three-way.

In Trump’s National Security Strategy, Latin America is an area that is projected as exclusive, where the United States intends to promote state, judicial and economic reforms that block the presence of China and Russia and direct the flows of raw materials to boost the “America First” program.

The strategy of soft coups against the Latin American political class, justified under the coverage of the “anti-corruption struggle” in recent years, forms the practical application of this strategy by achieving a realignment of the countries formerly governed by progressivism and the political center towards the United States. The result has been an undermining of the power of the nation-states of the continent, under which they try to hinder the rise of China and Russia as strategic partners.

However, the National Security Strategy as a paradigm is fed in turn by the doctrine of full spectrum domination and the Pentagon training circulars on unconventional warfare. It configures an aggressive foreign policy concept, of a military nature, where economic sanctions, the expansion of military bases, selective judicial persecution, the undermining of the economic power of the States and the use of mercenaries to “fight against organized crime”, mechanisms to control the region geopolitically.

Although Trump omitted making direct references to China and Russia, the speech was an exposition of the master lines of the National Security Strategy that justifies the exceptional and unipolar action of the United States in areas where there are strategic resources for its recomposition.

A DEFLATED SPEECH FOR THE 23F
While Marco Rubio and other congressmen are in Cúcuta to manage the entry of “humanitarian aid” on February 23, Trump’s speech seems not to have met announced expectations.

In his final words, beyond the explosion of emotion, there was a certain disenchantment with the United States’ own capabilities to crystallize a change of government in Venezuela in the short term. Trump made reference to that “someday” the freedom will return to Venezuela, reducing the opposition mood on the imminent exit of Maduro.

A few days from February 23, Washington has failed to manufacture (either of) the two preconditions necessary to implement the regime change: the military fracture or a civil war scenario that triggers the “humanitarian intervention”. For that reason, Trump’s commonplaces were a compensation mechanism to try to disguise the complications in order to remove Chavismo from power with the lowest possible political costs. The figure of Guaidó, however, as time goes by, reveals the inability to exercise real power in the Venezuelan territory and state.

Trump keeps the “military option” on the table without a clear and effective route that makes it viable.

In this sense, on February 23 an attempt is made to draw a turning point, where Trump’s speech, Marco Rubio’s electoral campaign in Cúcuta and the coordinated work between USAID and the Southern Command, constitute a provocative maneuver to encourage a military confrontation against Venezuela.

But precisely Trump’s speech, filled with clichés and phrases, highlights the urgency to recover the offensive, the inability to convince Maduro to surrender, the little consensus on which military intervention and the rearticulation of Chavismo count as a political bloc and a factor of order and peace within Venezuelan society.