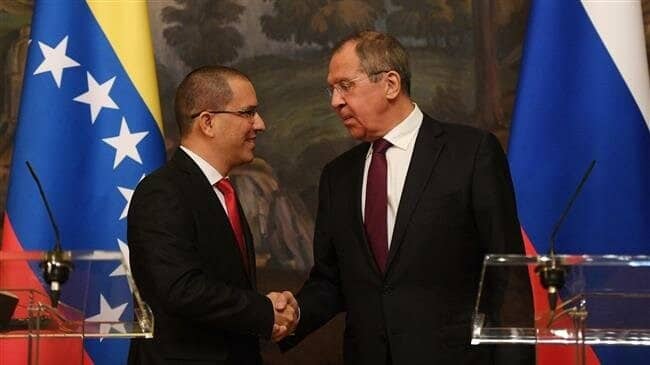 International News
May 7, 2019 orinocotribune China, no pasaran, Russia, US Imperialism, US Sanctions

Venezuelan Foreign Minister Jorge Arreaza denounced on Monday the “criminal” blockade that has been imposed by the United States and its allies against the Bolivarian Republic of Venezuela.

According to the Venezuelan Foreign Minister, the U.S.-led blockade “seeks to stifle the Venezuelan economy… More than 5 billion Euros, as well as gold, are frozen in the international banking structures.”

“Venezuelan gold worth 1.359 billion Euros is blocked at the Bank of England, 1.043 billion Euros belonging to PDVSA are blocked at (Portugal’s) Novo Banco. Part of that money is used to pay for the treatment of 26 patients needing bone marrow transplants,” Arreaza said, referring to a PDVSA program that funds medical treatment for children abroad.

RELATED CONTENT: Russian Senator: Everything Implying US Military Intervention in Venezuela We Will See as an Aggression

Arreaza pointed out that while Venezuela does not pose a threat to the people of the United States, Venezuelans will not hesitate to defend themselves from any military intervention.

“The Bolivarian Republic of Venezuela does not represent a threat to the United States, but also in the case of a military intervention, the Bolivarian National Armed Forces and the people of Venezuela are prepared to defend their sovereignty,” Arreaza said. “We are creating alternate routes with Russia, China and other allies in order to counter this economic blockade. Even the ships that carry the oil to Cuba are being sanctioned. It is a criminal blockade.”

The US Treasury Department has imposed successive rounds of sanctions against Venezuela, freezing Venezuelan assets abroad and targeting sectors such as banking, mining and above all oil, with an embargo imposed in late January. A recent CEPR report indicated that sanctions had led to 40,000 deaths and amounted to “collective punishment.”